The accomplished climber, slackliner and BASE jumper had recently turned his attention to FKT routes that mixed trail running with rock climbing 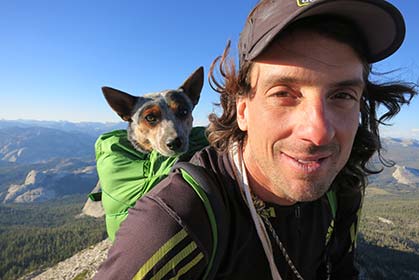 Free spirit and free soloist rock climber Dean Potter, 43, died Saturday evening, May 16, when he and a friend, Graham Hunt, 29, attempted a wingsuit BASE jump off of Taft Point in Yosemite Valley. Hunt was also killed.

Potter and Hunt jumped from the promontory overlooking the Valley, then failed to respond to a friend’s radio calls and did not appear at a predetermined meeting point. They were found Sunday morning by a police helicopter. Neither Potter nor Hunt had deployed their parachutes. The cause of the accident is pending an investigation.

An all-around athlete, Potter only two weeks ago set a new FKT on the iconic rock face Half Dome, running to the summit and back down in 2:17:52. To set the FKT, Potter pioneered a new route, which involved free soloing Snake Dike (5.7), an eight-pitch, 800-foot climb, considered one of the easiest routes up the Yosemite rock formation.

Though Potter was a climber, slackliner and BASE jumper by trade, running was always a part of his life. Potter grew up in South Carolina, where his father was stationed with the army, and regularly joined the new recruits for their runs. In his early 20s, Potter left the University of New Hampshire to pursue climbing, though running was an essential part of his training for big mountain linkups and alpine expeditions. “I guess you could say I was an ultrarunner,” he told Trail Runner earlier this month, “but just in my own way, and always in preparation for a big rock climb or expedition.”

Dean Potter was one of climbing’s most spiritual personalities, doing what felt right rather than what would earn him more money or fame, although he earned the latter in abundance, his lanky, unkempt person always drawing onlookers. Potter said that his three “arts” were climbing, wingsuit flying and slacklining. He excelled in all. He set the Nose speed record, made the first free solo of the Alien Roof on the Rostrum—he wore a parachute, “free BASEing” the climb, as he called it—and slacklined the Lost Arrow, all in Yosemite.

His Half Dome FKT was another step in what he called the “hybridization of the outdoor arts.” He had set his sights on a sub-two-hour Half Dome record, and hoped one day to combine trail running, climbing and BASE-jumping, using his wingsuit as an ultra-speedy method of descent.

Trail running also appealed to Potter as a less dangerous alternative to his other pursuits. “When you’re dealing with fear and danger,” he told Trail Runner after his Half Dome FKT, “there’s a lot of adrenaline going through your body, which leads to awesome highs but also unpleasant lows.”

Whatever Potter did, he did it his way and was troubled by watching the sport of climbing go from being a gang of rebels and even misfits who did their thing, flaunting conformity and regulation to err on the wild side, to a bunch of what he saw as clean-cut Wheaties-box athletes. “This homogenization of the Outdoor Industry has lasting ramifications,” he told me last fall after he was fired as a sponsored athlete by Clif Bar for what he said was engaging in high-risk activities such as soloing and BASE jumping. “Outdoor Arts are beyond sport and for many of us it’s our spirituality. The wilderness is infinite in what it offers. Shouldn’t we question when the leaders of our community try to manipulate our culture into a monocrop?”

Despite a ban on BASE jumping in Yosemite that his been in place since 1980, BASE jumping remains popular in the park, creating a cat-and-mouse game between jumpers and park rangers who try to catch them. Potter, who was featured in the recent film “Valley Uprising,” was one of the sport’s most ardent practitioners and shown wearing a mask to hide his identity in the video’s closing segment as he cut loose and flew off a cliff in Yosemite. He BASE jumped, he said, not to flaunt the law but to express his freedom as a human being.

“We are the last of the Wild,” he recently wrote. “If we keep excluding the next most-wild-creature, sooner or later there will be nothing left.”