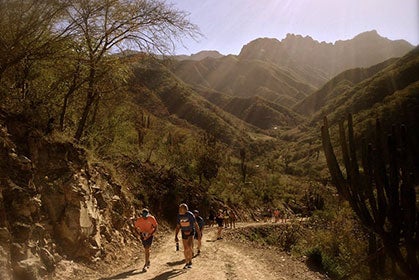 Don Winkley climbing up the road from Urique to the Guadalupe Coronado, part of the Caballo Blanco Ultramarathon course. Photo by Mikko Ijäs/The Origins documentary.

Confusion ensued almost immediately following a last-minute announcement the weekend before last that the 13th annual Ultra Caballo Blanco would be cancelled due to escalated drug violence in Mexico’s Copper Canyon.

Why the conflicting reports? It’s largely a matter of politics and the inherent challenges of putting on a sizable international race—on which, to some extent, the local economy has grown dependent—in the midst of what is essentially a war zone.

Founded by the late Micah True, who was known as “Caballo Blanco,” the 50-mile Ultra Caballo Blanco (originally the Copper Canyon Ultramarathon) was designed to honor and benefit True’s Tarahumara, or Raramuri, friends—an indigenous tribe of Mexican “running people” made famous by Christopher McDougall’s 2009 book, Born to Run.

True had another reason, too, though. He wanted the race and the act of running to serve as a contrast to the drug-cartel violence rampant in the surrounding canyons.

Of his race, True was fond of saying, “While they are at war, we come together to make peace here in the bottom of the canyon.” 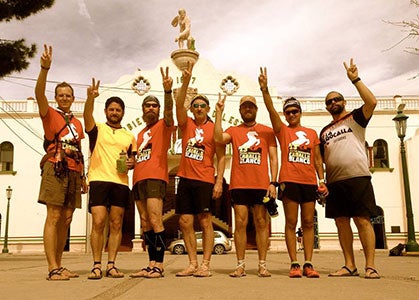 At 4 p.m. on Saturday, February 28, Walton and Stephens, along with their partners at Norawas de Raramuri, a nonprofit devoted to providing non-GMO seed corn and cash to Raramuri runners, made the announcement in the town square that the race had been cancelled. Prior to that, many of the international runners present had been oblivious to the violence lurking at the fringes of Urique.

After all, the days leading up to the race weekend had felt just like any other year—hikes along the racecourse with fellow runners, followed by music, film screenings and drinking in the evenings. A kids’ race, “Corrida de Los Cabballitos,” had carried on without any signs of trouble earlier on Saturday.

So, naturally, the news of the race cancellation came as a bit of a shock for many of the runners, particularly the 100 or so international runners who’d come from 23 different countries to Mexico to run the race.

Stephens, however, had been getting a very different picture.

Though he and Walton had been assured ahead of time by the Urique tourism bureau that it would be safe for runners this year as always, Stephens got a whiff shortly after arriving in Mexico that things were amiss. On Monday, nearly a week before the race, he’d planned to drive in to Urique by rental car from Mazatlan, a city to the south. After turning on to a dirt road along the way, he was stopped by several locals who told him, “You can’t go through here. Lots of people have died since December. The road is not safe.”

He opted to charter a small plane to fly him in to Urique instead, arriving on Wednesday. On Friday afternoon, he witnessed a truck of heavily armed men storming the local police station, disarming several police officers and dragging them away. Stephens says he saw a local woman weeping audibly, crying out, “Don’t take him! Please don’t hurt him. He’s my son.”

That Saturday, Mexican media outlets reported that, in a separate but likely related incident, the bodies of two police officers had been found some 20 kilometers outside of Urique on Thursday night.

Stephens also heard from a runner who’d been out on the course earlier on Saturday and witnessed trucks cruising the canyons filled with “cartel guys,” grenades being thrown, and the sounds of near-constant gunfire. Another international runner came back from a medical clinic where he’d been getting help with a minor injury. He reported being abruptly kicked out of the clinic when a local man, riddled with bullets and clearly in greater need of immediate medical attention, was brought in. 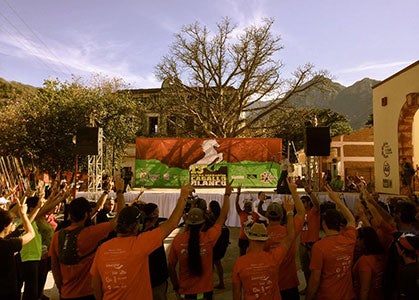 According to Stephens, when he brought the violence to the attention of the head of the local tourism bureau, Cecilia Villalobos, she was initially dismissive of it. However, he says, she changed her mind quickly, acknowledged that the violence was a problem and agreed with the race directors that the race should be canceled.

Villalobos and the Urique tourism bureau could not be reached for comment for this story. However, Villalobos told The New York Times last week that her initial agreement with the organizers that the race be cancelled was overruled by Urique’s mayor. Allegedly, he told her the runners would be safe since the violence had happened several miles away and government troops had arrived on Saturday to protect runners.

It’s possible that economic factors played a role in the local government’s interest in proceeding with the race at all costs. For the town of Urique, after all, the yearly influx of ultrarunners is one of the greatest contributors to the economy. Many local shop and restaurant owners make half their year’s income during race week. While foreign tourism in Mexico has plummeted in recent years due to escalating drug-cartel violence all over the country, the race has remained peaceful for all of its prior 12 years. In fact, Urique is one of the few towns in the Copper Canyon with any tourism economy whatsoever, largely thanks to the race.

When Stephens spoke with the presidente, or mayor, of Urique, Daniel Silva Figueroa, on Saturday, he says Figueroa told him, “If we cancel this, no one will come to Urique and we’ll never have this race again.”

Stephens told him that wasn’t true; yes, they wanted to cancel the race, but not forever. “People will come back,” he recalls telling the mayor. “They understand this is a temporary security concern.”

If they let the race go on, Stephens reasoned, and even one racer injury or fatality occurred, it would no doubt be the end of the Ultra Caballo Blanco in Urique—forever. A one-year suspension of the race, on the other hand, could preserve the chance to hold the race there again.

But shortly after the race organizers made their announcement of race cancellation on Saturday, the mayor mounted the stage in the town square to announce that the race was back on. They’d modify the course, avoiding parts of the canyon afflicted by heightened violence. The Mexican military presence, ushered in after Stephens and Walton expressed their initial concerns, would protect the safety of the runners.

“Some local guy got ahold of the mic and started being very confrontational,” says Michael Versteeg, an American ultrarunner who came to Urique this year to run the race for the second year in a row. “He started saying things like, ‘We live here, this is our town, this is our race. If those gringos don’t want to run, screw them, we’re going to run anyway.’

For the race organizers, the decision to cancel the race was made first and foremost out of concern for runners’ safety.

“We reacted with a clear conscience that no one would be harmed by a stray bullet,” says Walton. “I’m not going to throw someone out there on the course, whether they’re Raramuri, Mexican or otherwise. A bullet or grenade goes anywhere.”

Ultimately, though, the decision to cancel the race also became about sending a message.

“Like Micah said, we are messengers, bringers of peace,” says Francois “Flint” Bourdeau, an ultrarunner and member of the Norawas board. “If there isn’t going to be peace now, we’re not going to perform this act. We came here to separate ourselves from the violence, from white oppressors who’ve come here before and wreaked havoc on communities. Because this is not happening, we take a stance and make a decision not to run.”

With that message in mind, many of the international runners departed Urique on Sunday. The local government maintained their promise to still hold a race, albeit unsanctioned by the Ultra Caballo Blanco organizers, on a modified racecourse. Many of the Raramuri and Mexican nationals, along with a small handful of international runners, stayed to run the event.

“Everyone knows the risk they take going down there,” says Versteeg. “The difference this year was that it was not this abstract kind of thing. Until you hear gunshots, it’s not real. This opened a lot of eyes, even my own, of people who thought they understood before. It really kind of elevated how important the message this race sends is.”

Versteeg, who stayed to run on Sunday and blogged about his decision, says that even if he’d known ahead of time about the escalated violence, he still would have traveled to Urique this year for the race. He believes the race directors made the right call in cancelling the race, stressing that his personal decision to run was in no way a protest of their decision.

All throughout the social-media channels and blogosphere where runners continue reflecting on the events of the race weekend, the sentiment is clear: “We will be back.” While the specifics of the future of the Ultra Caballo Blanco remain in limbo, one thing is certain: the message of peace on which the race was founded 12 years ago resonates with its runners as much as ever.