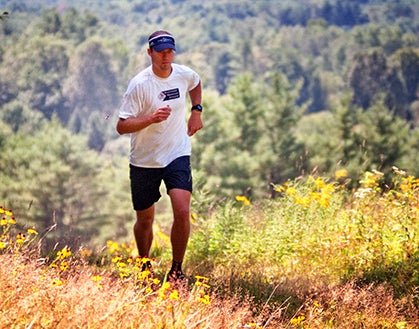 Denning, an accomplished ultrarunner and race director, was hiking and running on Beaver Brook Trail, a section of the Appalachian Trail that runs over New Hampshire’s Mount Moosilauke, according to a press release issued by the New Hampshire Fish and Game Department. Around noon, after more than three hours on the trail, Denning collapsed when the group paused to admire a view. A rescue team evacuated him to the trailhead, but he never regained consciousness. An autopsy report by the state medical examiner is pending.

“He was a giant in the endurance-racing community here in New England. His passing leaves an incredible void,” says Chris J. Dunn, who owns Acidotic Racing in Stafford, New Hampshire. “He challenged all of us to be more, to do more and to love more than we thought we were capable.”

Denning competed in area ultras since moving to New England a decade ago. His impressive finishes include fourth at the 2005 Vermont 50 Mile Run, second at the 2011 Finger Lakes 50 Mile Trail Race and first at the 2012 Vermont 100K Endurance Run.

But area athletes remember Denning less for how fast he ran than for the warm and energetic presence he brought to races.

“He was always filled with words of encouragement,” says area runner William Ulwick. “I never saw Chad without a smile.”

As well as competing in events himself, Denning helped grow the New England trail and outdoor scene by founding Team AMP, an organization that puts on multi-sport events, such as the XTERRA Stoaked Off Road Triathlon, the Western New Hampshire Trail Running Series, and Winter Wild, a series of hill runs on snow-covered New England ski slopes. Denning served as the race director for these events.

“Winter Wild was one of the best races I’ve done simply because of Chad’s vibrant spirit and completely uncontainable joy,” says local trail runner Gwen Shafer. “He was present in every part of the event, making sure not only that everything ran smoothly, but that everyone involved was having the time of their life.”

Colleagues remember the almost superhuman energy Denning brought to every commitment, whether racing, work or family. Doug Caum, Director for Education, Training and Evaluation at SCA, recalls working long days training new staff with Denning and other colleagues in Chicago once. Denning left one day after lunch, saying he’d be back the next morning. He drove to Wisconsin, ran a 50K, returned to Chicago late that night and was up for an early meeting the following day.

“There he is, at our 6 a.m. staff meeting, bright-eyed and motivated for the day,” says Caum. “You would have never known he had run 30+ miles the night before … There was no marker on Chad’s dial lower than 10.”

“Chad put his family at the center of his life,” says SCA Operations Director Rob Terry. Earlier this month, Denning and his wife, Becky, were planning to introduce their two kids to backpacking. They chose a beautiful route in the White Mountains, the Franconia Ridge Trail, but it was Labor Day weekend and the popular route would likely be crowded. So, after putting in a full day at work, Denning drove to the trailhead that Thursday night. In the dark, he ran eight miles uphill with a full pack, set up camp for his family and ran back. The next morning, he was ready to go.

On Saturday, September 20, Team AMP is holding a trail run in memory of Denning in Hanover, New Hampshire. More information on the event can be found on their Facebook page.