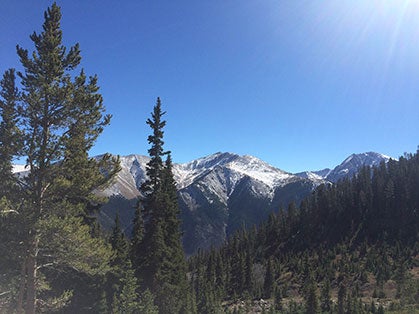 The objective of Nolan’s 14 is simple: tag 14 14,000-foot peaks, or 14ers, in Colorado’s Sawatch Range, in under 60 hours. (There’s some debate as to whether the cutoff applies to the final summit or the final trailhead, after the final descent.) Runners can start from the north or the south, and take any route they choose between summits. (Here’s the full backstory of Nolan’s 14.)

The route’s difficult terrain, off-trail navigation and finicky weather demand a high degree of self sufficiency, but nearly every runner who attempts it arranges a small support crew and meets them at road crossings and campgrounds. Hamilton made waves last fall when he completed all 14 summits unsupported, the first person known to do so, and reached the final trailhead in 60 hours 19 minutes.

Apparently, that didn’t satisfy him. At 7:05 a.m. Sunday, Hamilton started at the Blank Cabin Trailhead below Mount Shavano, the southernmost Nolan’s peak, according to his DeLorme GPS tracker. He finished yesterday at the Leadville Fish Hatchery, the northern terminus, at 12:44 p.m.

The previous overall FKT was held by John Robinson, who, in 2002, finished in 54:57—making Hamilton’s trailhead-to-trailhead time of 53 hours 39 minutes not only the unsupported FKT but a new overall FKT. Robinson, like Hamilton, ran south to north.

“He certainly knows these routes as well as anyone,” says Peter Bakwin, an ultrarunner who manages the Proboards Fastest Known Time forum and is considered an authority on trail-running speed records. Bakwin was following GPS readouts of Hamilton’s attempt and noticed that he sometimes diverged from conventional Nolan’s routes, allowing him to shave off extra time. “He must know the absolute most efficient routes for himself.”

Hamilton has a wealth of experience in the high mountains of Colorado. In 1999, he set a speed record for completing all 58 14ers in the state. (That record was lowered in subsequent years.) Four years later, he set a self-powered, self-supported 14ers record, cycling between trailheads.

“Andrew has had a great year,” says Bakwin. “How he could recover from the 14ers FKT, physically and emotionally, and smash out this Nolan’s FKT is beyond me … He’s so experienced in the mountains that I think going without any crew or pacers is probably just completely natural to him.”