The recent earthquake in Nepal presents logistical problems for runners in this multi-day stage race, though satellite communications promise everyone is OK 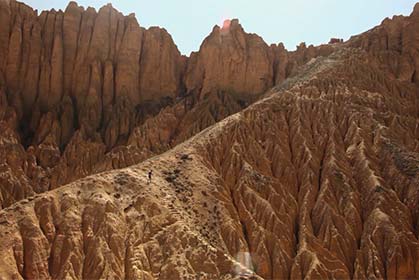 On April 25, a 7.8-magnitude earthquake struck central Nepal, killing nearly 4,000 people in Kathmandu and the surrounding towns, and triggering an avalanche on nearby Mount Everest that killed at least 20 climbers and injured several hundred. The quake also coincided with the Mustang Trail Race, an eight-day stage event that takes participants through the Mustang region of Nepal, along the Kali Gandaki Gorge between Annapurna and Dhaulagiri.

Roughly 220 miles from Kathmanudu and 95 from Pokhara, the Kali Gandaki Gorge was outside of the earthquake’s radius. Initially there was some concern over the runners’ safety, but race organizers have announced via satellite updates that they are all fine.

On Sunday they sent a message reading: “All well in yara. Another shake today. Deeply saddened by news. Continuing with plan.”

The race is small—only around 20 participants—and almost entirely off the grid. The group, including the race director, Richard Bull, is equipped with a satellite phone and satellite texting device, which they have used to communicate with a friend and liaison in the states. A full list of participants is not available, though we do know that Bryon Powell of irunfar.com is among the racers.

Powell’s girlfriend, ultrarunner Meghan Hicks, relayed that the runners felt the earthquake and the aftershock and saw some rock fall. Walls tumbled down in some of the villages along their course. 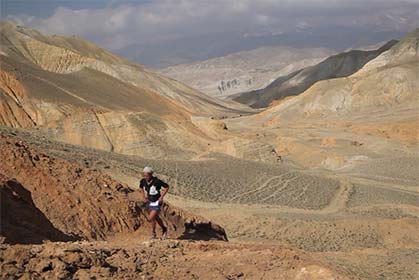 The race wends roughly 200-kilometers along an ancient trading route through Northern Mustang, Nepal, a stronghold of ancient Tibetan Buddhist culture long diluted in most other parts of the region. The course is an out-and-back, and as of Saturday racers had rounded the halfway point. They are continuing with their itinerary, as that is now the shortest way back to their starting point in Jomsom.

The race is set to wrap up on Wednesday, at which point the party will have to find an alternate plan for getting back to Kathmandu. Nepal has halted all domestic flights and there are serious delays on all international flights. The group will likely either hike out from Jomsom or take a jeep back to the capital.

Race director Richard Bull made this video at the inaugural Mustang Trail Race in 2013: