Feeding your spirit in Yellowstone

First, let me say I don’t think it’s OK to sneak up behind your competition and bite their Achilles. If God wanted us to … 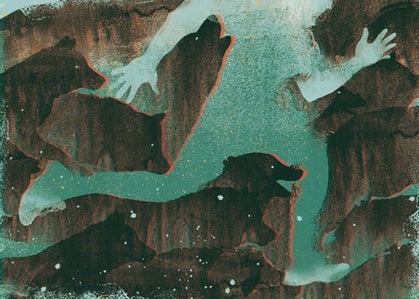 First, let me say I don’t think it’s OK to sneak up behind your competition and bite their Achilles. If God wanted us to employ this tactic, He would’ve given us bigger teeth. But on a recent trip to Yellowstone, I spent hours watching four coyotes relentlessly pursue a grizzly bear by biting his Achilles tendon. Every time he turned his back, one of the coyotes nipped his heels while the other three laughed in his face. When the bear turned on the nipper, the coyotes behind him became the biters, a brilliant tactical game on the part of the 40-pound canines.

The 700-pound grizzly looked as hopeless as a heavyweight fighter at mile 10 of the Leadville 100. Sure, he got a few swipes in and maybe bit an ear off, but after a few hours he was looking feeble. The coyotes were winning.

It got me thinking about lessons we can learn from nature, like: “While observing a grizzly get harassed by coyotes, watch where the heck you’re running.” I looked down and noticed I was standing on a wolf den! I poked my head into one of the holes and heard scratching sounds. That’s when I remembered the TV nature program where someone got between a wolf pack and its pups, and was nearly shredded by the angry pack.

I felt like I was back in Helena, Montana, doing the “Don’t Fence Me In” trail race the day before. There were five guys ahead of me, and a huge pack behind me, but I didn’t see anyone. I kept pushing because I knew they were there, gaining on me somehow, like a pack of wolves.

Jared Scott won that race, beating Matt Byrne by about 30 seconds. I finished a weak sixth, one reason being that I thought the 30K course markers were set in miles, not kilometers. I reached “18” and thought I had a half mile to finish, only to realize at “19” I had eight miles to go …

That’s why it was nice to be in Yellowstone recharging my spirit. Heavy snows had the animals congregating in the valleys, creating spectacular viewing. I PR’ed seeing nine grizzlies that day.

Finishing up one run there, I descended Druid Peak (9583 feet) on a game trail. I passed a devoured bighorn carcass, then, moving as stealthily as I could, a 6×6 bull-elk carcass. Back at the car I learned two wolves had run out on the trail I was on, right past my car, 15 minutes earlier. I never saw them, just like Matt and Jared.

Driving down the road 10 minutes, I happened upon the scene of another fresh wolf kill. An excited photographer showed me his shot of the black alpha male leaping off the road 10 feet behind the doomed mule deer. The wolf had chased it down the east flank of Druid Peak, across the highway between parked cars, and killed it on the bank of the Lamar River.

The following weekend I was in New Mexico racing the Jemez Half Marathon. We climbed a mountain and at the summit, Jared Scott was leading again. As we descended the long, technical downhill I moved from third to second and got Jared in sight. His glimpse backward conjured up the image of the panicked deer and as I gained ground, I imagined myself as the wolf reeling him in. The thought made me smile. Then, as I was about to make my move, Jared pointed at something up through the trees. I looked up and fell flat on my face. I tripped again minutes later even without his help. Some wolf I turned out to be.

Finishing, I thought I was second, but learned Jared had missed a late turn and was disqualified. I won.

Jared laughed it off afterward and told me he was going to go drown his sorrows. The following weekend I read he ran the Grand Canyon and set the “rim-to-rim” record in 3:06:10, beating Allyn Cureton’s old mark by 37 seconds. Apparently the Grand Canyon is a good place to “drown your sorrows.”

What has nature taught us here? Never give up.

The Best Mountain Bike Accessories of 2022