Thoughts from the edge 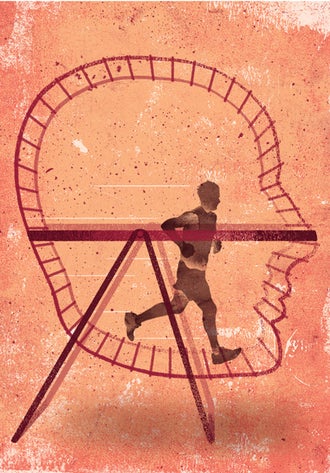 If you’ve never done it, it’s easy. All you have to do is wake up one day and decide, “This isn’t enough.” You may be on a nice smooth path and abruptly decide it leads nowhere.

Then, like a caterpillar transforming, you seek complete metamorphosis. Your wife won’t understand. Your employer may fire you. You risk losing everything. But you instinctively want to fly instead of clawing around like worm-like larva. If you’re male, it’s natural. If you’re female, you can delight in the fact that many male butterflies get hit by speeding trucks.

I’ve been trail running for years and recently decided I was bored. I’ve raced hundreds of times the last 15 years and it just stopped being enough. Maybe it was the tiresome terrain of dirt-road “trail races” that finally got to me. Or the monotony of race preparations. Suddenly I was deep in the doldrums, and sought desperately to inject fresh life into living.

Then one day, as if the cocoon cracked open, I was camped at 13,000 feet watching the sunrise on El Diente at 14,159 feet. An old friend, Dennis Webb, was snoring in a tent nearby. Dennis was managing his own crisis by climbing the 100 tallest peaks in Colorado. He was guiding me to the summit of three 14ers, El Diente, Wilson Peak and Mount Wilson in trade for my partnership on Gladstone, which at 13,913 feet was less tall, but somewhat technical and a climb you shouldn’t do alone.

We backpacked several miles and summited Wilson Peak the first day, then camped on a saddle. A band of marmots took every chance they could to steal food at camp. They chewed holes in our packs and gear.

They ate hot-dog juice in the dirt though I threatened them with an ice axe. They, too, wanted something new, regardless of risk.

The next day, as we gazed up the bottom of a deep cleft couloir on El Diente, I remembered that I hadn’t climbed something this steep in 15 years. When I saw Dennis scrambling to gain footing on the steep-pitched, rock-hard snow with his ice axe, fear crept over me.

I traversed east seeking stable rock, but found myself exposed over a 200-foot drop. I topped it and reconnected with the couloir and Dennis higher up, but loose gravel, rocks and icy snow surrounded us. Large rocks rolled down the couloir below us as we climbed side by side, trying not to kill each other. We finally picked our way up the ridge to the top of the peak.

Storms flashed lightning as we ate lunch quickly and began to descend. It started pouring. The granite and loose gravel were worse now. I sent so many rocks tumbling hundreds of feet below that I thanked the gods no one was there. My ice axe never came in handier. I cut handholds in the snow, and kicked steps with my running shoes. I was cold, soaking wet, shaking and exhausted from the intense effort. But when I glissaded down the end of the snowfield to a boulder field, I felt alive!

Dennis arrived as the rain stopped. With adrenalin still controlling our thoughts, we immediately set off to attempt another peak, Mount Wilson (14,264 feet). We spotted a distant cairn and aimed for it … across a narrow, icy couloir laden with loose rock, marble-sized gravel and steep sides.

What the hell was I doing here? (The adrenalin was wearing off.)

I wanted to turn back, but Dennis crossed over and up. If he could do it, I could, though at that moment I found myself questioning his sanity. And as I followed, I wondered who was crazier, him for leading this way, or me for following. I picked a higher line, and that was a mistake. My life depended on a quarter-inch axe-poke into frozen dirt to reach the next handhold. I took the chance, and never felt more alive … at least for an hour.

We summited, found the correct route down, and hiked back on an easy trail.

The next morning we climbed Gladstone Peak, and I felt the fear all over again on the north face, picking a route through the wobbly boulders and scree that pulled loose at every turn. We finally summited, then had to descend a solid but exposed ridge and a crumbled-rock couloir into safety. Relief overcame us at the bottom after the intense effort. I can’t tell you how glad I was to go back to a runable trail. Some midlife crises are short-lived.

Bernie likes finding the edges, and running around them.