Why Tukwila is better than Tokyo 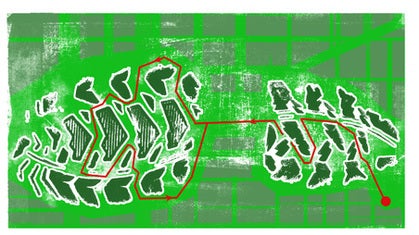 The 757 touched down on the runway at Sea-Tac airport at 10:29 a.m. The cabin doors opened, and I was off running.

I had exactly 2:44 in which to leave the airport, find myself a workout, return and check in before it was wheels-up for a 10 1/2-hour flight to Tokyo, sardine-ed into an economy seat for longer than a standard work day.

My game plan: take advantage of the fitness room at the nearby Marriott. I had stayed there years earlier and made mental note of the heavy-duty treadmills.

All went smoothly at first. The cab ride cost only six dollars—still less than a one-day membership at the closest LA Fitness, which I had also considered. I casually walked through the lobby with my bag of workout clothes. Act like you belong here, I whispered to myself as I avoided eye contact with a receptionist.

After changing, I stood outside the workout room. My plan had hit a snag; I needed a room key to access the promised land of treadmills. I tried in vain to get the attention of a guy who was spinning on the elliptical while watching CNN.

“Do you have a room key?” I asked, motioning toward the workout room lock. She shook her head and walked by.

Then I had a sudden crisis of conscience. On a simple level, I was trying to steal access to a workout. Last time I checked, theft was illegal, even in liberal Washington State. My craw filled with guilt, and I headed back upstairs to the hotel receptionist.

Sheepishly and humbly, I pleaded my case. “For what it’s worth,” I said, “The last time I stayed here, I didn’t use the workout room.” She listened to my pathetic request, and excused herself to call a manager. I had done my polite best, but I was also seeking permission while already dressed to run.

She reappeared and, for a split second, my hopes rose.

My chances for a run faded faster than Seattle’s November sunlight. The hair on the back of my neck bristled as I imagined sitting for 10-plus hours with another passenger’s seat reclined against my knees.

Then, an epiphany: “Could I, uh, check my bag here and run outside?” She approved with a hesitant smile and took my overstuffed duffel.

I stepped outside, beyond the automatic sliding glass doors, into the crisp autumn air of Tukwila, Washington. A jet flew overhead toward the airport, a reminder that I didn’t have much time. I narrowed my gaze, and focused on running a route that would be easy to retrace.

The run began predictably, as all paved runs do. Tukwila, Washington, is a town filled with 70s-era homes, chain-link fences and menacing dogs airing their bitter grievances. Every other home had a pick-up truck past its prime, and every fourth one displayed a Teamsters sticker. A church advertised weekly bingo. I crossed a busy street with a KFC.

The hills challenged my appreciative legs. Still, mindlessly slapping strides onto the pavement, I counted the minutes until I could declare this run “done.”

Suddenly I spied a grove of trees and a staircase vanishing down a steep embankment. Could it be a trail? I shouted in glee to find myself in a forest preserve.

This was so much better than watching Wolf Blitzer on CNN. I veered off one gravel path, onto a narrower dirt ribbon. Leaves the size of dinner platters carpeted the moist earth. I crashed along through them, breathing in the sweet scent of their rot, devoid of any thoughts of airports, trans-oceanic flights or work meetings.

Another staircase delivered me to another road, and I sadly headed back, emerging a few blocks from the Marriott.

Later, 35,000 feet above the northern Pacific, I filled out my customs form for arrival in Japan. It asked if I was bringing any organic matter into the country. I smiled, thinking of the mud and leaves still stuck to the bottom of my running shoes.