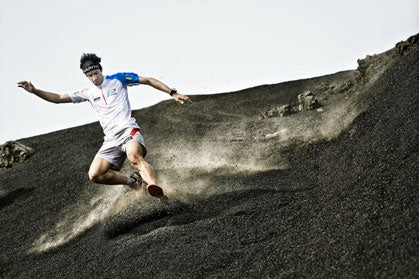 Spanish trail runner Kilian Jornet, 25, broke the speed ascent/descent record on Mont Blanc by running up and down the mountain in 4 hours and 57 minutes. This incredible feat edges out the 23-year-old previous record by more than 13 minutes. Departing from the Chamonix village church at 4:48 AM, Jornet and friend Mathéo Jacquemond ascended the Grands Mulets route on the north face of the mountain, reaching the summit in three hours and 30 minutes. On the descent, Jacquemond took a minor fall into a small crevasse, and knowing that the record attempt was in jeopardy, encouraged Jornet to finish the descent alone.

This climb marks the first mountain Jornet has climbed in 2013 as part of his “Summits of My Life” project, in which he hopes to ascend some of the most famous peaks in the world in record times while simultaneously striking “a balance between beating speed records at each vertex without assistance” and conveying “personal values upon life and the mountain.” For this climb, Jornet hoped to personify the values of friendship (by climbing with Jacquemond), simplicity (by going lightweight with minimal gear) and effort (by trying to beat the record). Of the Mont Blanc ascent, Jornet said, “Mathéo unfortunately fell down and could not accompany me on the final stretch, but it was a nice experience and the start of the Summits challenges this year.”

For the next phase of his project, Jornet hopes to take on Russia’s Mount Elbrus and the Matterhorn.