100-mile race recaps are a bit of both 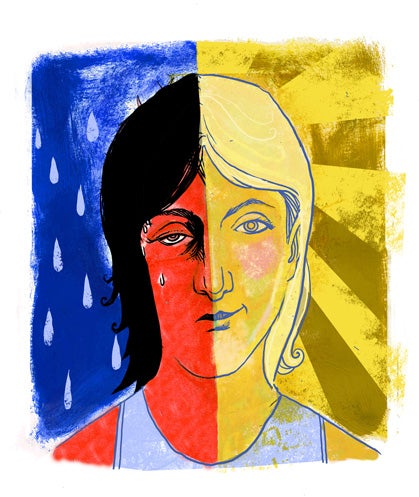 This article appeared in our June 2011 issue.

We had just settled onto the couch. Sawyer nestled between the two of us and I hit play on the remote. Family Movie Night XXVII began, and I unwrapped the foil from around a chocolate bar.

That’s when my wife, Holly, turned toward me. “I did something really crazy today,” she said, staring at me with those shimmering brown eyes that make it easy to forgive anything. Dented car? Lost garage-door opener? Spilled paint on the carpet? Released a plague upon humankind? No problem, honey.

“I registered for Wasatch,” she confessed. Stunned silence was interrupted only by the voiceover of a Walt Disney rat explaining his love for exotic cheeses.

Whoa. For months, Holly had considered whether to take on a goal as audacious as Utah’s Wasatch Front 100. A few nights, perhaps after an extra glass of Bordeaux, she even half-committed to it. This only supported my theory that enough liquid libation can convince anybody to register for any race.

“Should I attempt Wasatch?” she’d ask. “Could I run 100 miles?” It became a seesaw affair of deliberation. One day she’d resolutely declare intention. The next, she’d announce that such a long distance wasn’t for her.

Then it hit me. The driving force behind her uncertainty wasn’t self-doubt. It came online, by way of the mountain of race recaps she had been uncovering along the way.

Online, one can find a recap of any trail race. For races as legendary as the Wasatch, there may be hundreds. To be fair, these recaps contain great tips and pearls of inspiration. But they can also read like summaries of what can, and will always, go wrong, striking fear into newcomers.

Ryan Lauck captured a low point of his 2007 Wasatch run in a recap: “I am too tired to tell people … that I want to quit. I just want to lie on the floor and sleep.”

In another recap, Bill Thom, a 2006 Wasatch runner, also battled his body’s need to shut down: “I tried yelling, running faster, flailing my arms, deep knee bends, but the bouts of sudden sleep kept coming with increasing frequency. I saw nobody ahead or behind. Delusions had me convinced that I was off the course.”

Recaps are also littered with enough tales of injury and vomiting that it becomes easy to envision Wasatch as a cross between “ER” and The Exorcist. Liz Moroney placed third in 1999, but not without harrowing experiences. Late in the race she encountered a runner who talked as if “she ha[s] put away upwards of a six-pack of beer” and then “ditche[s] off to the woods to puke for the umpteenth time.” Later Moroney learned that the woman “slipped and fell on a stretch known as the ball-bearing pitch and may have fractured her pelvic bone.”

Then there are stories of nature victimizing runners. The Wasatch website itself warns of past encounters with elk, moose, porcupines, rattlesnakes, bears and mountain lions. Nature attacks from above, too. Jeff Washburn, 2002, wrote: “I see lightning off in the distance. Then I see lightning and hear thunder very near to me. The rains begin once again, the wind is blowing hard and I am climbing to my doom, to the highest point on the course.”

If my wife had read only these recaps, she would never have registered. But sprinkled throughout the tales of calamity are rays of hope and outright ecstasy. Mandy Hosford, a 2009 runner-up, painted a picture of the race as a summer picnic: “An incredible cadre of friends was on hand to load me up with love, good thoughts, homemade cookies and whatever else my heart desired.”

Darcy Africa, the 2010 women’s winner, viewed the race through equally rosy glasses, especially around Mile 70, on Red Lover’s Ridge. “The sun was starting to set, the colors were spectacular, we were up high in the mountains and I could see another alpine lake in the distance,” she wrote. “I remember feeling very blissful and grateful at this moment.”

Recaps, in the end, are best read with a grain of salt, sort of like creative non-fiction. There is certainly a tendency to embellish and romanticize the best and worst moments, occasionally in the same sentence. In fact, the Wasatch Front 100’s tagline is just such a wink. It’s “100 miles of Heaven and Hell.”

If Garett Graubins reads one more Charles Dickens quote in a race recap (i.e. “It was the best of times, it was the worst of times”), he might go off the deep end. Holly Graubins registered for the Wasatch 100, but did not make it through the lottery.