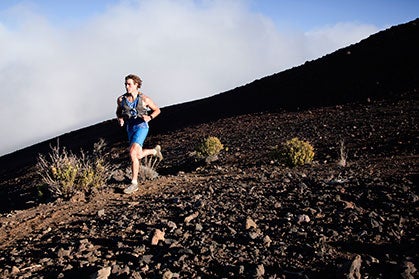 Seattle was gray every morning and I wanted out. I needed some tropical sun. With a pint of microbrew and a world atlas showing only topography—no borders or language barriers—I scanned for inspiration. Starting at the equator and working north, my eyes landed on a small group of islands in the Pacific. Tight contour lines jutted straight up from the ocean; it looked as though I might be able to run through the jungle and into the alpine on the same day. Matching the longitude and latitude, I landed on a name that surprised me: Maui, Hawaii.

At first, Maui didn’t excite me like other adventures I’d tackled, like riding a bicycle across the southern tier of Asia or down the length of Patagonia. Hawaii didn’t have the challenges that usually drew me to such far-flung places—remoteness, language barriers, dirty water or an unstable government. But I’d reached a point in trail races where finishing first or second didn’t inspire me like it used to, and no one had reported a Fastest Known Time (FKT) yet on proboards.com for the 18-mile ascent of the island’s prominent volcano, Haleakala.

I bought the cheapest airfare I could find and began training. Loading up my bicycle, Bob trailer, camping gear, La Sportivas and three pounds of quinoa—which I collectively called Tuktuk—I headed for the sun.

I spent the first few days running the upper section of the route and riding Tuktuk around the island. The morning of my planned attempt, I woke anxious after bad sleep on a full moon. After a two-hour bike ride from my camp to the trailhead, I started my run, eager to explore this rare place that offers so many microclimates and such constant grade within one run.

The lower half of the route crosses private ranch land, a maze of wild pig trails with sporadic signposts hidden by jungle grass. Within 30 minutes, I went from running to power hiking, then gasping for breath up steep doubletrack paved with fist-sized lava rocks. At 4000 feet, I spotted a herd of goats spread across the route on a distant knoll.

Suddenly, two distant white dots started barking and moving fast in my direction. Several months prior at a race in Colorado, experienced mountain runners had warned me that high-country ranchers use big, white, Burmese-mountain dogs to protect herds of livestock.

I hopped off trail and into a gully, but within seconds, two snarling dogs stampeded into the gully after me. I sprinted for a tree and scrambled up to a branch, waiting there until they lost interest and wandered off. My effort for the day was thwarted. I retreated to the Kaupo general Store at the base to do some more research on how to handle the dogs.

The store owner, a lean woman about five feet tall with leathered skin and loose clothes hanging on her narrow shoulders, offered to call the sheep rancher. Punching numbers with her thumb, she disappeared into a back office.

When she came back, she leaned a shoulder on the doorjamb and told me, “just don’t try to steal any goats and you’ll be fine.”

I thanked her and committed her image to my memory, adding it to the list of characters I’d met since arriving on the island: Justin, an Olympic-caliber runner and Maui local who chased down goats to sell on Craigslist, a group of long hairs from a nearby tent-beach community and a friendly crew of marijuana farmers who’d taken me snorkeling. 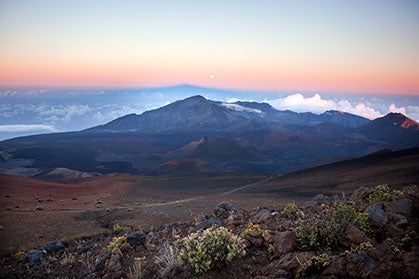 Haleakala juts 10,023 feet from sea level on the island of Maui. Photo by Eddie Gianelloni.

Leaving the store,  I returned to my base camp—newly named  “The Beehive” as a  result of spilled GU—and fell asleep. I took several days off to recover, drinking coffee in beach cafés and waiting for the weather to clear.

Three days later, waking up at 4:30 a.m. to stars close enough to touch from the door of my tent, i decided to make my second attempt. Starting up the trail in the dark, i felt less intimidated by the tapeworm trails through knee-high jungle grass and ankle-roller rocks.

The dreaded goat crossing came after a quick hour and 10 minutes. i felt good, but the sound of barking again set me on edge. This time, though, i was greeted by a couple of Peruvians tending the flock. They shouted at the dogs and that was the end of it.

The route sees little traffic below the crater. If there ever was a proper trail, the jungle ate it a long time ago. After some bushwhacking, I crossed the Haleakala national Park boundary, where a pristine alpine trail emerged, offering faster running with views clear down to the ocean where I’d started.

Punching through the clouds at the crater, the hot, lifeless landscape made me feel as though I’d left the planet. Sheer walls hugged both sides of a tight notch, protecting the route from the wind. The horizon was stacked with fiery red and orange ridgelines.

The final 3000 feet of Moab-style slickrock and sand were dry with sustained, painful switchbacks. after slogging over two ridges, I’d burned through what little i had left to give. When i finally emerged at the summit, I glanced at my watch: 3 hours 37 minutes.

The other day, a gal asked me why I sacrifice so much to run in the mountains. I told her, “I like to chase things.” Finisher medals and T-shirts are great, but there is something uniquely fulfilling about doing something creative that is all your own. 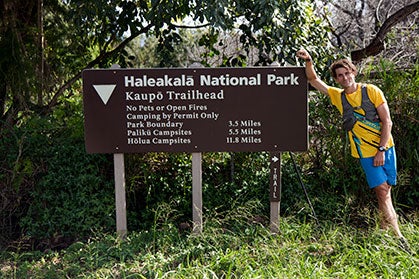 Fast begins his adventure at the Kaupo Trailhead. Photo by Eddie Gianelloni.

Best Time to Visit. Year-round—the temperature on the island doesn’t fluctuate much. On Haleakala, be prepared for high winds, low visibility and anything from rain to sleet to hail.