My running pal Joe always says, “It’s not a trail run without a good joke.” While recently encouraging my wife to pace a friend … 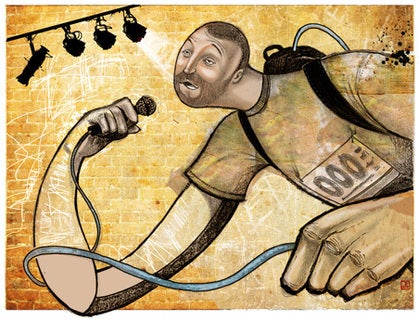 My running pal Joe always says, “It’s not a trail run without a good joke.” While recently encouraging my wife to pace a friend at the Leadville Trail 100, I said, “It’s easy. Just make sure he stays on the trail, keep him alert, and tell lots of really bad jokes.”

When we’re in the heat of a long trail race or the throes of a serious training bonk, even the worst eye-rollers somehow become funny. It’s as if anything—even a poorly delivered joke about private parts or bodily functions—presents a better alternative to stomach problems, thrashed quads or throbbing blisters. Trail-running jokes are like golf jokes: told to pass the time.

Did you hear the one about the ultrarunner who shuffled into the aid station of a 100-mile race a few years back? “I’ve been feeling lousy for the last 20 miles,” he said. “I just can’t keep it together.”

The medical personnel looked him up and down and shrugged, unsure of the problem. One of them explained, “You don’t seem any worse than the others—the only way we can know is if we get urine samples, stool samples and blood samples.”

The ultrarunner looked at his watch and quickly did the math—he was barely making the cut-offs. He stood up, removed his shorts, and handed them to the doctor. “Give me the diagnosis at the finish line,” he yelled, and disappeared bare-assed into the forest.

I heard recently that two trail runners in Montana’s glorious Glacier National Park were deep into a training run when they spotted a Honda-sized grizzly several hundred feet ahead. The bear spotted them and, in a rage, charged. One runner squatted to tighten his shoes.

The other, panic-stricken, said, “What are you doing? You’ll never outrun that bear!”

His friend stood, and said, “I don’t need to outrun the bear.”

And we’ve all heard about the bear scat found along the trail that contained a can of pepper spray and pile of little bells.

Running shorts and undergarments are great fodder. Strange but true: a runner in Virginia who will remain nameless (his name rhymes with Harry Kipling) runs many trail races with mango-colored women’s panties in one hand. I bumped into him as I was scouting the Bighorn Trail Runs course in Wyoming one year.

“Hey,” he exclaimed, twirling the silky material in the air, “I found these on the trail. Do you know who they belong to?”

“Well, if they were yours, you’d have some explaining to do,” he said, and continued merrily down the canyon.

While the most useful jokes are generally told by a pacer, runners themselves deliver as well: in bite sizes, and spontaneously.

One of my favorites allegedly came from Red Fisher during the 1986 Wasatch Front 100, when he barreled into an aid station boasting about how he was hammering up a trail, “passing trees as if they were standing still.”

As, injured myself, I watched this year’s Leadville Trail 100 from the sidelines, a runner trudged through mile 40. “I’ll be fine,” he said sarcastically. “It takes me awhile to warm up.”

When I get grumpy during early-morning miles, too caught up in my training, and overly focused on my splits, I appreciate the light-hearted moments. I once laughed so hard that energy gel came out my nose.

Garett Graubins swears the mango panties didn’t belong to him.