Part I: How park closures and permit withdrawals impacted the trail-running community 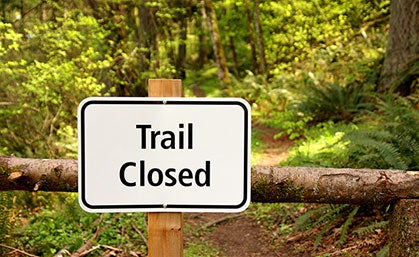 “Keep going! You are running better than our government!”

So proclaimed a sign that Tina Mowery, 42, of Ellerslie, Maryland, saw at a recent race. Though a sense of humor may have helped diffuse frustrations during the 16-day U.S. government shutdown, the headaches it caused were very real—including many for the trail-running community, who faced race cancellations and “closed” signs at the entrances to National Parks. Although National Forests remained open for recreation, most race permits for those areas were revoked due the mandatory furlough of all “non-essential” federal employees.

Despite the frustrations of losing a couple thousand dollars and all the hours invested in planning the race, Bartley says he’s sympathetic to the Forest Service for being in what he calls “the unenviable position of enforcing the political posturing of our so-called leaders.”

A week earlier, Augusta, Georgia’s Forks Area Trail System’s shutdown forced the cancellation of the FATS 50K. Organizers scrambled to put together a contingency plan, and, fortunately, several land owners generously offered to the host the race on their property.

Other events were not so successful in finding alternatives. In Swoope, Virginia, the sixth-annual Grindstone 100-miler was cancelled. “It takes a small village to put on these races,” says Mowery, who spent many months training and preparing to run Grindstone. “Not only are the runners in limbo and sidetracked, so are crews, pacers, family members and babysitters.”

Many trail runners from all over the world who’d planned Rim-to-Rim runs across the Grand Canyon earlier this month had to abort their plans. Those who opted to enter the Canyon illegally were surprised to find that at least one government employee had not been furloughed—Outside Online reported last week that 21 people were ticketed and fined in a single day for entering the Canyon. (The Grand Canyon re-opened on October 12 with state funds.)

Some trail runners shrugged off the park closures altogether; after all, most National Forests and state and county parks remained open. Several of our government-employed readers whose jobs were furloughed say the shutdown’s only effect on their trail running was more time to run. Others, however, lament the painful hit their family budget took during the no-pay furlough.

Perhaps it’s not the park closures, race cancellations or wallet casualties that aggravate the trail-running community most—but rather, the political games led to such frustrations. As Mowery points out, “Cancelled races are a little easier to swallow if it’s weather-related, not because of politics.” Her proposed solution? “I say we put politicians on trails for an ultra to settle this. The countless hours spent on the mountain would give them time to talk.”

We trail runners may have temporarily lost access to some of our favorite trails, but our sense of humor is resilient as ever.

Read on for Part II: Don’t Jump That Barrier, A deeper look at why recreationists should respect Park Service closures.