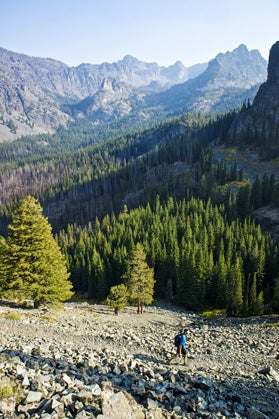 Mike James cruises to the route’s finish in Idaho. Photo by Steve Graepel

“I think it’s going to rain,” I muttered to Mike as inky clouds blotted out the sky and lightning lit the canyon walls in bright technicolor.

“Positive thoughts,” he said. I tucked my feet into a garbage sack and rocked for warmth as the sky unloaded.

It was my first trip—and my first time meeting—with Mike James, a 40-year-old airplane mechanic out of Billings. I was looking for a companion to run the canyon; he was looking to take in “an easy 60 miles” the same weekend. I could help him with some miles, but they wouldn’t come easy.

Two hours later a flock of chukars flew through the dewy morning light. I rolled over to find Mike plucking spines out of his backside. While descending from the Oregon highpoint, we were stymied in the canyon basin by nightfall, preventing us from crossing the river back into Idaho. Wading through the dark, in search of a place to bivy, Mike had slipped off a grassy ledge and onto a patch of prickly pear cactus, abruptly breaking his fall.

“Evidently it takes about a spine per pound of flesh to stop a man,” Mike flipped.

Desolate, hot, dry, inhospitable. … Many see Hells Canyon as purgatory. But we came looking for adventure and Hells dished it out in heavenly portions.

Our goal was simple—complete an out-and-back of North America’s deepest can- yon, which sits at the borders of eastern Oregon, eastern Washington and western Idaho. At their highest points, the canyon rims are slightly over 8000 feet (Idaho) and 5600 feet (Oregon) and stretch 10 miles before they plunge into the Snake River. Getting to either rim requires a committing approach: eight miles from the Windy Saddle trailhead in Idaho and a mile or two from Hat Point, Oregon. In the trench, the out-and-back route serpentines 42 miles and climbs 18,000 feet. From scouring the sources, best we could tell it had never been attempted. We were getting schooled as to why.

Twenty-four hours earlier we had left the Windy Saddle trailhead in Idaho, shouldered our bloated packs and trundled over manicured trails afoot the Seven Devils Mountain Range. Our approach circled counter-clockwise under granite spires and through charred toothpick forests, eventually running out onto Dry Diggings ridge—a high-alpine plateau that would bring us to the rim. We used the time to introduce our- selves, both silently assessing each other’s skills and vocally sharing our extracurricular vitae. Mike rattled off a few of the big races as he pitched down the trail.
“We’re in it for the long haul; let’s take it conservatively,” I suggested, throttling back the testosterone.

After three hours, the trail plunged nearly 6000 feet into the Snake River, which we only briefly discerned before it cut behind chiseled walls. The canyon air was stained auburn by the Sheep Fire 20 miles north, making the Oregon rim appear farther away. Mike spied a lone tower piercing the horizon line: Hat Point, our turnaround destination.

The abstraction of distance and terrain began to settle into reality.

The Snake is a lifeline for southern Idaho, bridling fertile ground and power where there would otherwise be neither. Hells Canyon is no different. Only here, the canyon always takes more than it gives. The trail to the river revealed a quick visual history of the Canyon’s greed: a rock shelter dated over 7000 years, pictographs painted on the basalt walls, fruit orchards gone feral and farming implements strewn about the McGaffee Cabin—abandoned since 1935. Just then, the anachronistic din of internal combustion caught my attention. 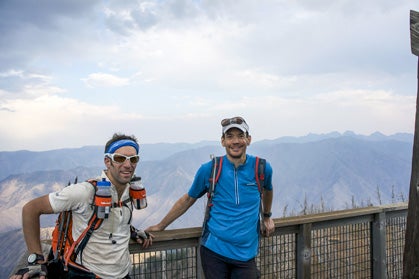 As we approached the river, a flotilla of rafters dropped into the Upper Bernard Rap- ids. We thumbed a ride on the rafts into Oregon, 100 yards and 15,000 cfs away.

“Where’d you boys come from?” Our guide was a seasoned river traveler with a nicotine-stained mustache and a Chaco tan—he’s been calling rivers his home since ’78. I’m sure he’d seen or heard it all.

“The top … Seven Devils,” I said and pointed. The guide strained to follow my finger to the skyline above. He shook his head.

“You boys have fun,” he said, as he eddied the boat and we stepped into Oregon.

The Oregon side of the Snake is paralleled by the historic and sacred Nee-Me- Poo Trail, the route that Chief Joseph led his people on from Wallowa Lake to Montana while fleeing General Howard in 1877. We followed it southward until we saw the sun-weathered Hat Point Trail sign, which marked six miles to the Oregon highpoint.

The Hat Point Trail quickly disappeared up a stringer can- yon, rotten with volcanic scree. The canyon’s broken earth took back half of every step. Route finding and the afternoon heat stifled our pace to a crawl.

Eventually the canyon broke into mellower ground then slipped into forest where it resumed the climb toward the boreal rim. Five hours later we climbed out onto the crest and up the lookout tower we had spied earlier in the day. With only a few hours of light and thunderheads on the horizon, we quickly retreated. The return miles clipped by quickly but as we slipped over the final series of grassy fells before the river, darkness eclipsed our intent.

“No sense trying to swim it in the dark,” I said. “We should bed down and rest.”

Mike’s entire right side was studded with cactus spines from his fall so rest was an easy sell. We spent 45 minutes extracting barbed quills from his back, shoulder and legs … some buried deep, past fascia and into muscle. We agreed we didn’t know each other that well and I left Mike to pull the spines on his back- side on his own.

I pulled my sleeves over my calves and draped the map over my torso and drifted into sleep as the glow of the Sheep Fire illuminated the sky behind the cresting ridge to our north.
I woke to chukar rallying the morning light. “I guess we should get moving,” I suggested to Mike, still harvesting quills. He shaved the rest off and bufferd the stumps from his compression shorts with a pair of gloves and we left.

We hoped the dam-fed Snake would drop overnight, but the early morning river level still had massive water for two lone runners with ballasting packs. We care-fully selected a broad stretch, well above objective hazards, battened down the packs and dove into the flow. What appeared to be mild eddies were fraught with current.

Exhausted and separated by 200 yards, we pulled ourselves onto the Idaho side, organized our gear and began the slow climb up the canyon walls toward flatter ground, quietly reveling in snagging this plum.

We entered the canyon as strangers, tethered by a line slung between two high points. Thirty-six hours later we walked out as friends, having shared the adventure of a lifetime.
A week passed before I reached out. I was curiously looking for the deepest documented river canyon, and posted a link to Mike’s Face- book wall.

… And the next adventure begins.