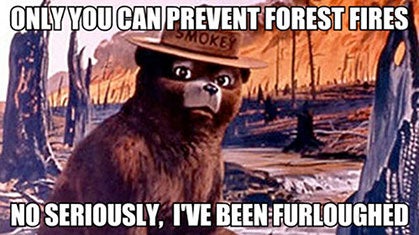 Editor’s Note: This is continued from Part I, ‘Government Shutdown Reached Trails.’

Earlier this week, when we asked Trail Runner Facebook and Twitter followers how they’d been affected by the government shutdown, many gleefully recounted ways they’d rebelled—ignoring trail closures, jumping barricades and outrunning park rangers (or at least dreaming of the opportunity to do so.)

Although it’s easy to feel outraged at the situation of taxpayer-funded public lands being “closed,” the issue is not so cut and dried. Just as it takes a small village to put on a trail race, the more than 20,000 National Park Service employees who’d been furloughed perform vital roles in keeping our parks open. They build and maintain the trails we all enjoy, keep the roads in good shape so we can get there, and, in cases of emergency, may play roles in first aid or rescue.

While fostering recreation opportunities is indeed a part of why President Woodrow Wilson signed the legislation that created the National Park Service in 1916, it’s only one aspect of a greater mandate: “to conserve the scenery and the natural and historic objects and the wildlife therein and to provide for the enjoyment of the same in such manner and by such means as will leave them unimpaired for the enjoyment of future generations.”

The reason entry fees exist for most National Parks is to augment government funding of Park Service personnel in their mission to protect the land and wildlife—often from excessive impact of human recreationists. They work to prevent, among other things, illegal wildlife poaching, tree cutting and destruction of wilderness, and dangerous campfires in especially dry areas under fire bans. Along popular trails like the Grand Canyon’s Rim-to-Rim route, park employees shovel out composted human waste from public bathrooms by hand. It is then helicoptered out of the canyon by the Park Service.

In Death Valley National Park, she reports, “Visitors are defecating on the ground immediately adjacent to locked public restrooms.” Now that Park Service employees have been permitted to return to work, the unpleasant task of cleaning up these messes falls to them.

In an accompanying blog post, Marquis adds, “In addition to vandalizing park property, several visitors have chosen to leave choice written messages directed at the staff, including: ‘F*** you. This is my park. I pay taxes.’ Or ‘I peed in your parking lot you federal government bastards.’”

Her film illuminates how, over the course of the past few weeks, many frustrated recreationists have misdirected their anger about the federal shutdown. The film reminds viewers not to lash out at the Park Service itself—nor at the beautiful, vulnerable lands it works so hard to protect. Without staff to perform essential functions in the parks, or even to collect the fees to offset these costs, it is understandable that parks needed to remain temporarily closed.

A report by the non-partisan Coalition of National Park Service Retirees (CNPSR) estimates the Park Service’s lost revenue over the first 10 days of shutdown at $450,000. “The only thing that would be crazier than shutting down America’s national parks would be for Congress to allow wide open access to the parks without NPS’s dedicated and hardworking employees in place to protect the sites,” says Chair Maureen Finnerty. “By essentially enabling looting, poaching and vandalism, Congress would be taking what is already a dark episode in the history of our national parks and making it worse, including the theft or destruction of national treasures of incalculable value.”

Despite what Woody Guthrie says, National Parks belong to the federal government. We pay taxes—and, often, entrance fees—so that these lands are properly managed for the benefit of the greater good. The people who work in the parks are just as passionate as you are about trails. Respect them by observing park closures and direct your feedback toward those who denied the Park Service operating funds in the first place.