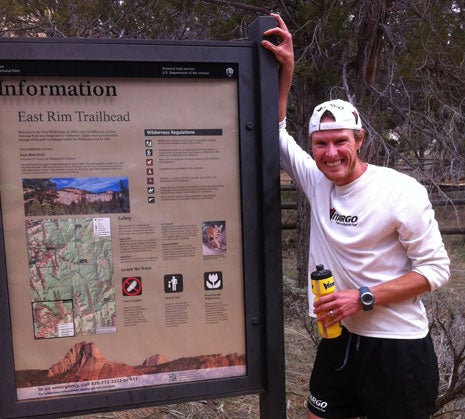 “Balance, that’s the secret. Moderate extremism. The best of both worlds.”
—Edward Abbey, Desert Solitaire: A Season in the Wilderness

As a younger athlete, I eschewed the idea of just about anything that did not involve competing in an organized race. Why train for something if I wasn’t going to test myself against the best? What was the point of traveling far away if a race wasn’t on? And previous, jobless, kidless life did cater well to organizing my existence around, well, organized races.

Enter a real job, two kids, the big 3-0 and a bit of maturity (I know, what I’m about to describe may not seem very mature), and I made a shift. All of a sudden I found myself dreaming all winter about a different kind of big “race,” one that did not involve other people, an official course or a marked starting line.

Ultrarunning for time and adventure on unofficial courses—Fastest Known Times (FKTs)—has taken off, and my first experience with the concept has convinced me why it’s here to stay. For working professionals, parents and other busy people, the flexibility of setting a “race” on your own time has great benefits, whether or not breaking a record is your goal. For techies, route trackers like Strava provide a forum for competitive, friendly and/or social comparison. For backcountry lovers, running alone or with a small group in the wilderness provides adventure. For elites, an FKT attempt on a new or previously established route run can bridge other events. For pros, an FKT might even mean cash bonuses from sponsors.

So, last December, I set a goal of breaking ultrarunner Luke Nelson’s record time of 7:48 for running 48 miles across Utah’s Zion National Park on a route known as the Zion Traverse, Trans-Zion or Zion Crossing. Logistics, mapping and other details were an adventure of their own, and Nelson, adventurer Andrew Skurka and others helped with my homework.

Running across Zion is a fairly simple concept, and a glance at a park map reveals a clear route of established trails connecting Lee Pass on the west side to the East Rim Trailhead on the east side. Like other such endeavors, however, the devil is in the details. The route climbs some 10,000 vertical feet. Gradients range from flat to super-steep, both uphill and down. Footing includes decent trails and pavement, but a good deal of it is sand, rock, mud, slickrock and riverbed. A few potential bail-out points exist, but much of the route is remote, not covered by cell service and bereft of people—as it should be. 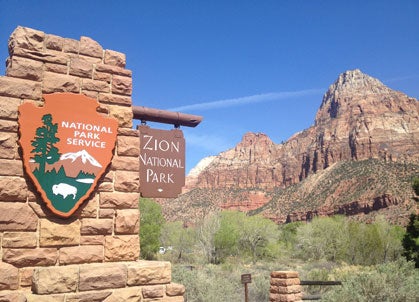 When April rolled around and Kilian still hadn’t posted, I headed to the desert with Charles and Nick, my support crew. The crew would meet me at two points to supply new Vitargo S2 (a super-soluble carbohydrate powder) mix bottles and water bottles, and I can’t stress enough their importance in my endeavor. We arrived at Lee Pass on the west side of the park at about 7 a.m. on April 6, and I headed out a few minutes later. No gunshot or “Eye of the Tiger,” the start was remarkably unceremonious.

Cruising down the La Verkin Creek Trail at dawn, dipping in and out of the drainage surrounded by high desert brush, I envisioned trailside stalking mountain lions.

As I rounded blind corners, I’d warn, “Hey, cougar!” Soon, though, energy-sucking sand decreased my enthusiasm for catcalls. Then as I headed northeast up La Verkin Creek, I encountered the first of 10 or so through-hikers.

I turned right and southeast off La Verkin Creek onto the Hop Valley Trail, and hit the first big climb. Rangers had warned that this section (and others) might be covered with snow and/or mud, and I was relieved to find the trail almost completely dry, with just a bit of mud in places. My Hoka Stinson EVO shoes and Moxie Gear gaiters worked well here, as elsewhere.

As it turned out, the running conditions were almost ideal over the whole route. There was, of course, plenty of sand, technical terrain, climbing and descending (about 10,000 feet of each), and a temperature range from mid 40s to high 80s.

Hop Valley was in good condition for running, with just enough water in the stream to cool off on its numerous crossings. My first time check for the run was at the end of Hop Valley at 13 miles, where the trail crosses Kolob Terrace Road. Nelson had posted his splits for the run, which he had done in the opposite direction (east to west), and I had calculated his time for three segments across the route. Since we generally slow down later in an ultra, I figured I had to complete my early sections faster than he had. I was a couple minutes off my goal at the Hop Valley Trailhead, and worked hard on the Connector Trail, heading east to its junction with the Wildcat Trail, where I would meet my crew at 16.8 miles. The Connector Trail rolls nicely through open fields and old pine forests, and I almost felt like I was at home in the Colorado Front Range.

I was enthused to hit the crew point at 2:27, and so was my crew—they had arrived just moments before! Running down the trail alongside me, handing off fresh bottles and clothes, Charles and Nick gave me a nice boost. I grabbed two bottles of Vitargo S2 and one bottle of water. As it turned out, my entire consumption for the run was four bottles of water and four bottles of Vitargo S2, each with 175 grams of carbohydrates and 700 calories, plus some salt pills.

I hadn’t seen anyone in about 10 miles and would not for another 12—perfect.

Wildcat Canyon presented a nice combination of forested terrain and energizing views. The climb was consistent, but not too steep, and I continued to roll, reminding myself that working hard now would get me to the finish faster. When I turned south on the West Rim Trail from the high point of the route at about 7500 feet, I had covered 21.5 miles.

This began my strongest segment of the journey, and I was happy to run at just over seven-minute-per-mile pace as the trail gradually descended along the plateau overlooking white and red cones, canyons and low desert beyond.

At 4:33 and 31.4 miles, I passed the second Telephone Canyon Junction on the left, began descending steeply towards The Grotto and remembered that my final 17 or so miles would involve a steep descent of over 2300 feet on rocks and pavement before climbing the same amount out of the other side of the canyon during the hottest part of the day. This final stretch would the most challenging, and I ran hard, deeply committed to hammering to the finish. 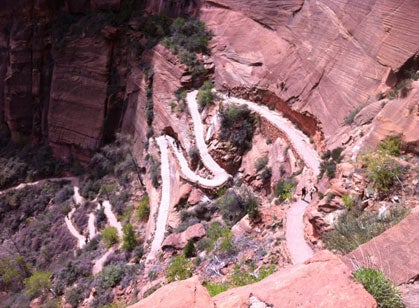 The descent to The Grotto around mile 36

Descending the 21 switchbacks of Walter’s Wiggles was a quad masher. I passed The Grotto at the Park’s central tourism area, mile 36.4, at 5:16. I had about 12 miles to go. Given the upcoming 2300-foot-plus climb of the East Rim Trail, technical terrain and rising heat, covering the distance in less than two and a half hours was not a given.

Here, my friend and coaching client, Charles, who would complete his own first ultra a few weeks later, joined me to take in the experience and provide company. Power hiking with trekking poles, we met a constant stream of day-hikers, which spurred us on.

Back on the plateau and alone again, we simply trudged on. Nick was waiting for us on the trail a few miles before the finish. Thinking of my family as I crossed the finish in 7:27 alongside two friends, I realized that, at least for me, even a solo event can be a team effort. 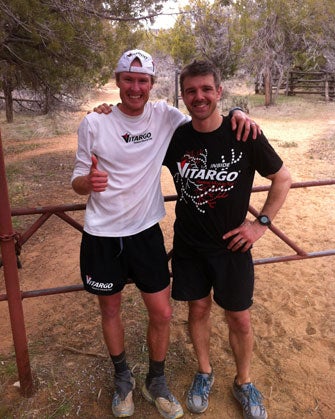 So, will I continue to toe the line in organized events? Absolutely. Am I already plotting another wilderness journey against the clock? You betcha.

Seven weeks after I set the Zion record, two exceptional runners, Mike Foote and Justin Yates, broke it by five minutes, running together in the east-to-west direction. “Could either of us run faster alone?” mused Yates in a conversation with me. “Hard to say. Ultrarunning in itself is such an up-and-down pursuit, totally given to the moment.”

Why Do So Many Thru-Hikers Become Trail Runners?