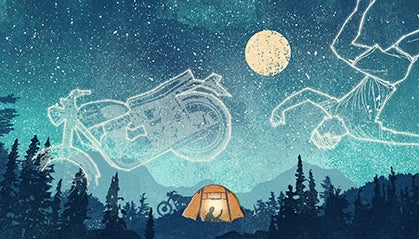 The engine of the motorcycle ticked like a dying metronome as the oil and metal cooled and settled. Nearby, I lay in my sleeping bag beneath the brilliant and vast Arizona night, and turned the page of my book. A dull ache spread through my body, reminding me of the punishing 65-mile trail run that I had put myself through in the Rocky Mountains only a few days earlier.

The book was an old copy of Robert M. Pirsig’s 1974 classic Zen and the Art of Motorcycle Maintenance, which I often bring on long motorcycle trips. The moon illuminated a passage that I had underlined from a previous reading.

“Although motorcycle riding is romantic,” Pirsig wrote, “motorcycle maintenance is purely classic.” Pirsig’s book illustrated a bipolar world: The romantics conduct a life of imagination, creativity and inspiration, while the classics maintain a more practical life, “economical and carefully proportioned.”

To the classic, the motorcycle is about “pieces and parts, components and relationships.”

To the romantic, the motorcycle is about “feeling, intuition and esthetic conscience.” I had underlined the last two words, and scribbled off to the side, “for the romantic, motorcycle = freedom.”

I entered the world of motorcycles as a romantic, as most motorcyclists do, feeling that I had finally found something else as liberating as flying down a mountain trail on my own two feet.

Since the intricate workings of my body were equally foreign to me, by no coincidence I was simultaneously paying various mechanics of the body to realign, reshape, poke and prod my abused runner’s frame back into working order. What the podiatrist, physical therapist and chiropractor saw as a series of components, I saw as words that seemed to emerge from a Shakespearean tragedy—maximus, femoris, minimus and sartorius. The more these people spoke to me in Latin, the less I paid attention and the more I got injured.

It then occurred to me that running attracts the romantics over the classics for the same reason that motorcycles do—because covering distance across land is a pure and unadorned expression of freedom.

It was still early—the full moon told me that it was well before midnight. I closed the book, slipped out of my sleeping bag and walked over to the bike. I checked the oil level. I set the tension of the chain and made sure that there was enough brake fluid in the reservoirs. All simple things that were once foreign to me.

Before crawling back into my sleeping bag, I reached up toward the moon and stretched, noting a specific tightness in my right hamstring and left Achilles. I imagined the body as a system of components rather than the mysterious vessel that has taken me across great expanses. I ran my hand along the lateral side of my leg. Checking for knots. Listening with my fingers.

I laid my head down while one final passage tumbled around in my mind: “That’s all the motorcycle is—a system of concepts worked out in steel.”

That’s all the human body is—a system of concepts worked out in flesh and bone.

Rickey still brings his body to the mechanic from time to time.