At the end of last year, we asked readers who they thought the year’s best trail runners were, in six categories: male and female ultra, non-ultra and FKT. Here are the results; thanks to everyone who voted!

Thirty-two percent of voters chose 29-year-old Forsberg as the top female ultrarunner. The Swede had an outstanding year in trail running, winning every Skyrunning Ultra race she entered, including the Rut 50K and Transvulcania. She also won the Mount Marathon Race in Alaska, a super-steep 3.1-mile mountain run, besting a 25-year-old course record. (Read more about Forsberg in the upcoming March issue of Trail Runner.) 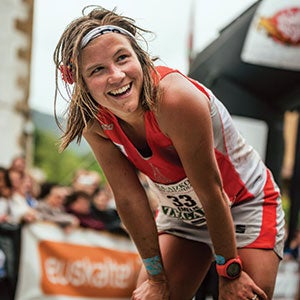 Boulet, 42, of Oakland, California, garnered 22 percent of the votes. She won six out of the seven trail races she competed in this year, including the Western States 100-mile Endurance Run and the Ultra Race of Champions, all while working as the Vice President of Innovation, Research and Development for GU Energy Labs, and raising her son, Owen.

The 70-year-old runner from Spokane, Washington, made waves this past summer by finishing Western States just six seconds before the 30-hour cutoff, becoming the oldest woman ever to finish that race.

The Spaniard, currently living in Chamonix, France, won his category by a landslide. Forty percent of voters chose the 28-year-old, who didn’t run many races this year, but won all that he did compete in. He set set course records at both the Hardrock 100 Endurance Run and the Mount Marathon race in Alaska.

Two people nominated Lance Armstrong as the top male ultrarunner of the year after he won a 35K trail race (technically, not an ultra) to great controversy.

Kimmel topped the charts with the largest share of votes in any category: 48 percent. She had a slew of high-profile victories in 2015, winning the USATF Trail Marathon Championships at the Moab Trail Marathon, the Dolomites SkyRace, the Rut 25K, the Flagstaff SkyRace and the North Face Endurance Challenge Championships 50-miler. Kimmel, 35, lives and trains in Silverton, Colorado.

King, 35, of Bend, Oregon, captured 33 percent of votes with a stellar year of racing. He was the winner of the Dirty Half Marathon, Moore Mountain Half Marathon and Warrior Dash World Championship 5K (for which he won $30,000). He also set an FKT for the Timberline Trail around Mount Hood.

King stops for a selfie during his record-setting Timberline Trail run in October. Photo courtesy of Max King

Gray was second with 20 percent of the votes. He was the top American finisher at multiple international events, including the Mountain Running World Championships and the Skyrunning SkyRace series. He was second in the USATF Trail Marathon Championships at the Moab Trail Marathon and at the Flagstaff SkyRace. Gray also bested a long-standing FKT on the Manitou Incline, a trail that rises 2,000 feet in less than one mile.

Anna Frost is congratulated by race director Dale Garland shortly after her Hardrock 100 win in July 2015. Photo by Paul Cuno-Booth

Anderson wasn’t far behind Frost and Gosney, with 32 percent. On September 24, she arrived at the Appalachian Trail’s southern terminus in Georgia, having completed the trail in 54 days 7 hours 48 minutes. Her effort is the fastest unsupported time, men’s or women’s. Anderson finished only eight days slower than Scott Jurek’s supported record.

Jurek, one of the most famous trail runners in history, was all over the news last summer, including non-running media such as NPR, for setting the supported speed record for the Appalachian Trail in 46 days 8 hours 8 minutes, three hours under the previous FKT. The 42-year-old resident of Boulder, Colorado, has retired from races to focus on family, but has said he’ll continue running. Jurek’s name appeared in the write-in responses for every single category except female non-ultra, and he attained 46 percent of votes in the male FKT category. (You can read the full story of Jurek’s quasi-retirement and record-setting AT run run here.)