This article originally appeared in the December/January 2002 issue of Trail Runner.

In most sports you’re over the hill at 30. But in trail running, being in your 20s typically means getting soundly beaten by people who might be old enough to be your parents.

For years, seasoned runners in their mid 30s and early 40s have dominated the trail and ultra-running scene in North America. In the ultra-marathon distances especially, several components of high performance tend to improve with age—experience, mental toughness and perhaps even an appreciation for physical suffering.

Those are some of the reasons trail runners tend to peak much later than their road racing and trail running counterparts. But times are a changing and as trail running grows in popularity, a new wave of younger athletes is sending ripplies through the sprt.

“We are really excited to see the participation in this age range start to grow. We are beginning to see father-son teams enter races, “ says Greg Soderlund, race director of the Western States Endurance Run, the country’s premier 100-miler. “These ages are critical to the growth of the sport.”

Overall running participation numbers for Generation X (roughly the 24- to 35-year-old crowd) dwindled in the early 1990s, and today’s 12- to 24-year-olds, also known as the MTV generation, seem to be fixated on speed, aggression, adrenaline and instant gratification sports like snowboarding, skateboarding and mountain biking. Even the concept of finishing a road marathon as life’s defining moment is lost on most of these folks.

For years many have wondered if there would ever be a “next generation” of trail runners—Ben Hian’s mid-1990s greatness notwithstanding. Legends Matt Carpenter and Ann Trason, who were in their 20s when they started winning races, are still blasting away the field some 15 years later. But there are some hungry young athletes nipping at their heels.

In 2001, Carpenter, 37, again won the country’s oldest trail marathon on Colorado’s Pikes Peak, where only six of the top 30 male finishers were under 30 years old. But in the women’s race, sevond place went to a 20-year-old from the flatlands of Nebtaska who was racing her third Pikes Peak Marathon.

Also last summer 40-year-old Trason led the women at Western States, where just three of the top 30 finishers were under 30. Among that 10 percent, however, was a relative infant in the sport, Scott Jurek. He won the men’s race for the third time in a row at the tip, young age of 27.

It was only the second three-peat at Western States—the first was by Tim Twietmeyer, who was breathing down Jurke’s neck in 2001, finishing second at the age of 42 and setting a new master’s course record of 17:33. The youngsters may be making gains in trail racing, but the older generation isn’t exactly rolling over and playing dead.

Still, the veterans don’t appear resentful of their younger rivals. If anything, they lean in the other direction. “Everyone is out there rooting for each other. It’s so supportive,” says Katie Benson, 26, an up-and-coming ultra-runner who finished the Western States 100 for the first time last summer. “The older gnerations inspire me to keep running. I’ve been given plenty of hard-earned advice from the pros.”

One of those dispensing advice is David Horton, 52, a record-breaking ultra-runner, coach and college professor at Liberty University in Virginia. Horton, known for his unyielding passion and contagious enthusiasm, is still in the upper echelon of trail runners—he and Blake Wood became the second and third finishers of the Barkley 100 last spring—and is encouraging younger runners to set their sights high.

“We have gained credibility and are seen as a legitimate sport,” he says. “Young people understand what a positive sport trail running is. Thus more young people are trail running.” 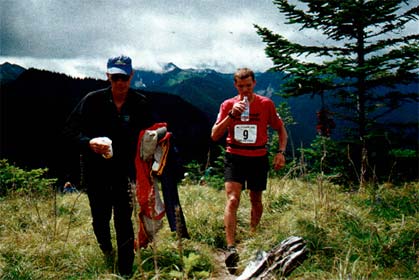 Clark Zealand (9) gets some support from David Horton in the 2001 White River 50-miler near Enumclaw, Washington.

One of those young people is ultra-runner Clark Zealand, 28, who once trained under Horton and now is a track, trail and ultra coach himself.

“My father has been my greatest influence—he was a solid runner for many years,” he says. “But Dave Horton turned me into a trail runner.”

Zealand’s group of young trail runners are attracting other college students to the sport.

“I see runners get tough and become proactive in many areas of their lives,” he recounts. “As they leave college life, they developed a balance for the rest of their lives. But, like ultra-running, the balance does not come quickly or easily. It develops over time, and it requires a serious degree of inner strength.”

Notall of the 20-ish trail runners have come to the sport through older mentors. Many have taken a more roundabout route, approaching trails through other sports. Jurek and his brother, Greg, 22, are highly accomplished, competitive cross-country skiers who started trail running for overall conditioning—and became hooked. Rock climbing, mountaineering and mountain biking have also turned people on to trail running.

Other young trail phenoms are runners looking for a different experience. “Road and track runners simply burn out on the repetition and are looking for new, fun ways to compete,” says Ian Torrence. The 28-year-old from Seattle gave up road racing for trails and has become a top ultra-runner. In 1999 he won 12 ultra-marathons—more than anyone else that year.

When young trail runners talk about the inner strength they earn on the trails, their peers often don’t understand. “Demanding a workout from the mind and body is something only a handful of 20-year-olds are willing to do,” says Dr. Emily Cooper, who runs Preventive Solutions, a whole-body sports clinic in Seattle. “The ones we see are not a group that is easily deterred—they are super-positive and exude enthusiasm. They don’t come with a big ego saying, ‘I did an ultra.’ Their egos just aren’t in that kind of space.”

Those who are simply trying to boost their ego or improve their pick-up lines, choose an easier sport with more cachet. You can call yourself a rock climber while just dabbling in the sport, but you just can’t do that in ultra-running.

“Posing does not work,” Torrence agrees. “You are either hard-core and mentally with this or you just aren’t. There is no medium ground. This sport attracts the mentally tough and dedicated. Most are true to their word—work hard, and play hard.”

Emily Loman, a law student at the University of Colorado, knows all about hard work and hard play. In 1999 at the age of 23 she was the youngest finisher ever of the Hardrock 100 in Colorado, considered by many to be the toughest ultra-marathons in the country. The following year she bettered her time by more than six hours and last summer was one of the favorites for the women’s race but was derailed by stomach problems.

One of Loman’s favorite aspects of trail running is the diversity of the participants. “You are not segregated into a gender, age and speed group, so you are there with everyone,” she explains. It’s neat to be in a sport with lots of people from different backgrounds.”