Edward Lychik runs his own race 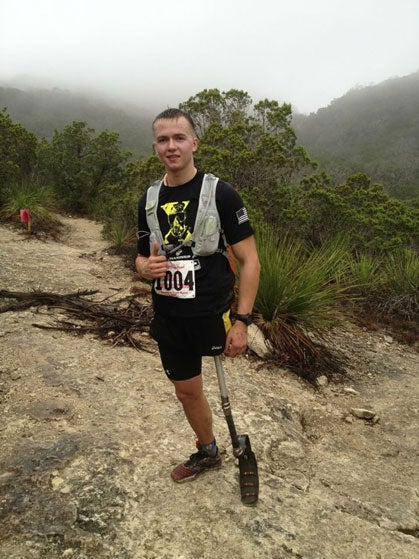 While working as an Air Force chaplain the Center for the Intrepid, a physical rehabilitation center for the department of defense, I met an extraordinary wounded warrior. Edward Lychik, 22, of Tacoma, Washington, had lost his left leg in Afghanistan when a rocket struck the truck he’d been riding in while on mounted patrol.

Edward began running with his prosthetic leg with a group called Team X-Treme, a foundation that brings support and awareness to wounded warriors. Knowing of his passion for running, I invited him to run the Bandera 25K in Texas with me and my girlfriend, Michelle Hey.

On the cool, misty morning of the race, we arrived late, missing the official start. In some ways, this helped ease the usual starting line pressure.

Sauntering up to the starting line about 20 minutes after the other runners had taken off, Edward insisted that Michelle and I run our own race and not feel obligated to hang back with him. Within a half mile, however, he’d already showed us he could run the course on his own. The course was burly, even for those without a full prosthetic leg: in the early miles, several runners had dropped out, stymied by the steep, muddy terrain. Edward, still new to trail running, handled the slippery mud and loose rock with grace, dodging cactus and other dangers along the edge of the trail.

At mile four, the first problem struck: a bolt had fallen off the back of Edward’s prosthetic. We pulled over to the side of the trail, and he was able to fix it by securing it with a strap. 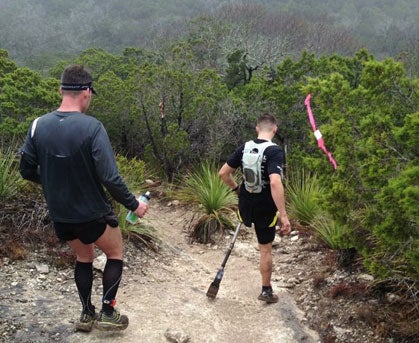 Several miles later, though, the sole he’d used for tread on his prosthetic foot blade began to disintegrate, leaving the carbon-fiber blade prone to damage. For the rest of the race, we used a variety of creative tweaks to maintain tread under his blade—at first clothespins, then yellow “caution” tape we found on the trail. A passing runner even offered the drawstring from the waistband of her running shorts—but eventually, Edward resorted to simply using his other shoe. He adapted it to his left-foot prosthetic, and ran the next few miles sock-footed on his right side.

The fact that, now, his uninjured leg and the prosthetic one were at very different heights, threw off his ability to run. That’s when, providentially, the course sweepers happened upon us and offered us some moleskin and, if we could make it to the next aid station, a pair of shoes. At Edward’s behest, we moleskinned a gel pad removed from his prosthetic to the bottom of his foot and replaced his sock. This was a great fix for about a mile—after which we ended up using a strap from the prosthetic to hold the gel pad in place.

At the aid station we met with Mitch Allen and Dr. James Ficke, who donated fresh shoes. With a Salomon on his prosthetic blade and a Brooks on his foot, both right shoes, Edward strode out of that aid station like a thoroughbred horse.

I looked at Michelle and said, “Let’s just keep him in sight, and hopefully we will catch up when he tires or hits another obstacle.” At some point, Edward did slow down and we were able to catch up and run the final five miles together with no more issues.

Earlier on, I had feared we would be lucky to even limp across the finish line—but when Edward ran across that mat at the finish, it was to the cheers of a roaring crowd.

Edward said somewhere in the middle of the race that there’s not an obstacle he couldn’t get past, and he proved it at Bandera. No one has ever deserved a finisher’s medal more.

All authored materials constitute the personal statements of Charles Seligman and are not intended to constitute an endorsement by the U.S. Air Force or any other Federal Government entity.