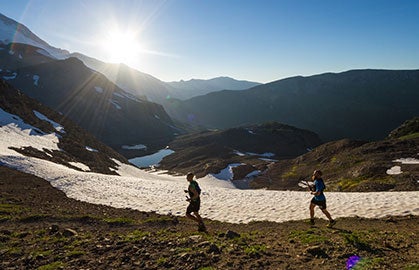 Gary Robbins (right) and his pacer Yassine Diboun on the Wonderland Trail during Robbins’s successful FKT attempt in July. Photo by Jeff Pelletier

This summer, stout records fell on the Wonderland Trail, a 93-mile loop that encircles 14,410-foot Mount Rainier in Washington State.

One of the country’s best-known backpacking routes, the Wonderland Trail gains and loses around 25,000 feet, dipping into forests and crossing rivers before wending back up into the alpine. Unsurprisingly, for years the trail has attracted seasoned ultrarunners in search of speedy supported, unsupported or self-supported times. Also in July, Ras Vaughan, 44, and Richard Kresser, 29, both of Seattle, established a new route, a summit traverse and partial circumnavigation of Rainier they dubbed the Cowlitz Connection Route.

Finally, on August 31, less than two weeks after deciding to give the Wonderland a try, Jenn Shelton, 31, currently living out of her van, bested the previous women’s supported FKT for the Wonderland by almost 18 minutes.

Gary Robbins: “You’re either going to be the fastest person in history, or you’re not” 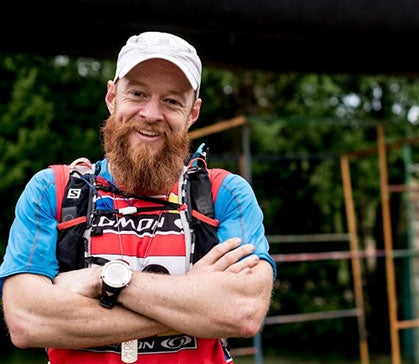 When Gary Robbins, a Newfoundland native, moved out west to Banff, Alberta, he was a 19-year-old more interested in linking up nightclubs than peaks. Even so, he recalls that Mount Rainier was one of the first big Northwestern mountains he knew by name.

Later, living in North Vancouver, Robbins would often drive the 350 miles round trip to Tacoma, just south of Seattle; his partner, now wife, Linda Barton, lived there. On the way, Robbins would catch glimpses of far-off Rainier on the horizon. But coming into Tacoma southbound, he could see the glacier-streaked peak in all its glory.

“It was this huge beacon of confirmation that I was almost there, my drive was almost over, I was about to spend the weekend with my best friend,” he says.

By then a prolific trail runner with a string of FKTs and podium finishes to his name, Robbins looked up the trail’s current supported FKT: 20 hours 53 minutes, set by Kyle Skaggs in 2006. It was so fast it had discouraged other supported attempts, it seemed. Robbins thought he could go under 20.

Last October, Robbins hiked the trail over three days with a group of friends. This year, as spring brought unseasonably warm temperatures and low precipitation, he realized the trail would open weeks ahead of normal, and planned his attempt for July 1—Canada Day, and one of the year’s longest stretches of daylight. Also, Linda was due to give birth later in the summer, so he wanted to get the run in as soon as he could.

Treating the Wonderland attempt as a goal race, Robbins put in months of targeted training. “The trail is basically either going up or down,” he says. “I incorporated a lot of—I wouldn’t say super-high-mileage weeks, but high-vert weeks.” A typical training week might mean 80 miles and 25,000 or 30,000 vertical feet in the mountains.

Sometimes, he went out on “mileage-building mountain missions” around British Columbia.

Before Robbins left Vancouver for Rainier, Linda—who, uninsured for childbirth outside Canada, stayed behind—told him, “I think you can do this in 18:55.” Robbins laughed, and “told her she was pleasant and crazy.” 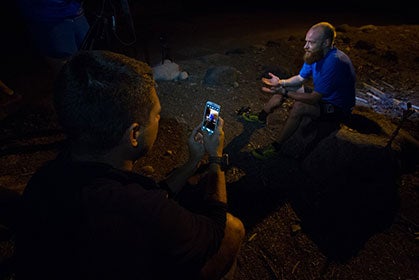 Her prediction sure sounded crazy around midday on July 1. In the 90-degree heat, a frustrated Robbins found himself walking up slopes gentle enough to run. He was doing the math in his head—“which is like the worst thing to do; I coach runners, and I say, ‘Never do math’”—and figured he had fallen off FKT pace.

For an hour or more, he thought his attempt was over. Then he passed a sign—three miles to the White River campground—and realized that, even hiking, he had been gaining time. He was 20 minutes ahead of his best-case split, and suddenly Linda seemed sane.

Robbins ran the final third with Yassine Diboun, a runner based in Portland, Oregon, who, with Brian Donnelly, holds the Wonderland’s unsupported FKT. Thirteen miles from the end, they met their “crew chief,” Rich White, who directs the state’s popular Cascade Crest 100.

Beaming, White told Robbins, “Listen. This isn’t about the record now. This is about everybody that’s coming after you.”

“There’s no one else out here,” Robbins said. “What are you talking about?” Then his fatigue-addled brain realized what White meant. He was running to set a record that would stand for years.

And so Robbins, helped by an amped-up pacer and crew, “left everything out there” and finished in 18:52—two hours and one minute faster than the time everyone thought was untouchable.

“It’s nice to be competing, historically, against the best the sport has seen,” he says. “You’re not competing against other people on the day for a placement in a race. The attempt on an FKT is black and white: You’re either going to be the fastest person in history as of that day, or you’re not.” 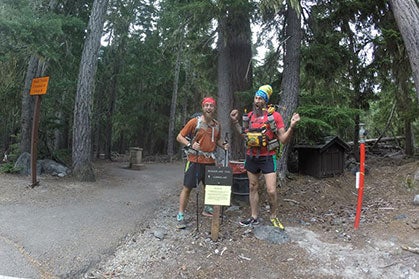 “UltraPedestrian” Ras Jason Vaughan is known in the trail world for covering distances that are long, even by ultrarunning standards, in never-before-done style. He calls these pioneering efforts—an 89-hour double Wonderland circumambulation in 2012, a 68-hour sextuple crossing of the Grand Canyon in 2013, a 13-day unsupported crossing of Washington State—“Only Known Times,” or OKTs.

Vaughan attempted another ambitious OKT route on Rainier in July, with fellow Seattleite Richard Kresser. It would be a full circumnavigation of the massive volcano, with a technical summit climb thrown in midway.

They two would run-hike 30 clockwise miles of the Wonderland Trail. From there, they’d ascend Rainier via a mountaineering route, traverse a summit crater and descend via glacier to their starting point on the trail. Then, they’d cover the remaining 63 miles of trail on foot, counter-clockwise.

The Rainier Wonder Route, as Vaughan and Kresser dubbed it, required each to carry a 40-pound pack stuffed with helmets, boots, crampons, ice axes, harnesses and headlamps, as well as food and water.

“Carrying our mountaineering gear for an additional 60-plus miles after the [summit] traverse was an ‘out there’ idea,” Vaughan told Trail Runner when we covered the attempt earlier this summer. “But to me, to cache the gear just seemed so ordinary.” 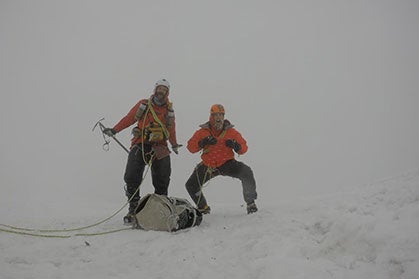 Vaughan and Kresser atop Mount Rainier after ascending the Disappointment Cleaver route. Photo by Ras Vaughan

Slowed by heat and arduous terrain, the duo arrived at the base of their mountaineering route six hours behind schedule. They had to wait another 18 for the snow and ice conditions to be safe enough for an ascent. They traversed the summit, descended to where they’d started, 54 hours 32 minutes earlier, and decided to call it a day. They called this shortened line the Cowlitz Connection Route.

Vaughan hopes to see others lower his and Kresser’s Cowlitz time. “It’s a very soft record,” he said in July, “and we’d love to see someone put up a respectable time on it.” 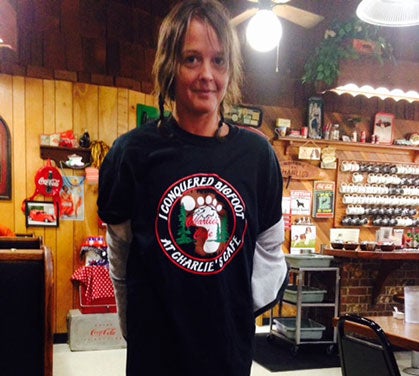 Jenn Shelton wearing her prize for finishing the massive pile of breakfast food that comprises the Bigfoot Challenge. A few hours earlier, she set an FKT on the Wonderland Trail, but that didn’t come with a T-shirt. Photo courtesy of Jenn Shelton

The latest Wonderland FKT was claimed by Jenn Shelton, an ultrarunner who’s as famous for her vibrant persona as for her stout racing resume. (Shelton is also a contributing editor for Trail Runner; she last wrote about running in the Grand Canyon with Lance Armstrong and Connie Gardner.)

Shelton decided to run the Wonderland Trail fairly last minute. “My buddy Colin asked me if I wanted to come to Washington to hang out at the end of the month,” she says. “I told him if he’d take me up Rainier, then I’d come. Then I remembered Wonderland goes around Rainier, so we did that too.”

A week and a half later, on August 30, Shelton arrived at the trailhead.

She wasn’t unprepared. She had a plan: “Go super slow, then if in striking distance at the end, run hard.” And she had called accomplished ultrarunner Krissy Moehl—who, with Darcy Africa, held the women’s FKT of 22 hours 22 minutes 45 seconds—to inform her of the record attempt and to ask for route beta.

Shelton stuck to her plan. With 20 miles to go she felt ready to push—but the weather wasn’t cooperating. It was after midnight, it was storming and Shelton was above the region’s relatively low treeline.

“It was just nasty,” she says. “I couldn’t see the trail or cairns and was lost almost every step.” She threw her handheld in frustration: “I was like, ‘I have been patient for 18 hours and I feel great and now I’m at a fucking standstill and bleeding time.’”

Even so, she made it to the trailhead in 22:04:47—a new FKT by about 18 minutes. “Thanks to Krissy + Darcy for setting a fun goal,” she later wrote on Instagram. 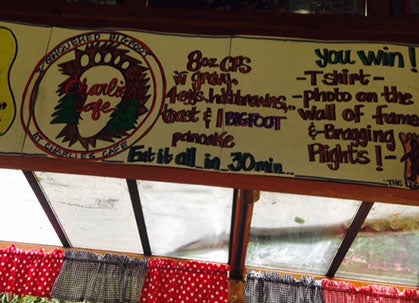 The description of the Bigfoot Challenge. Photo courtesy of Jenn Shelton

She still had one more record to fell. A few hours later, at Charlie’s Cafe in Enumclaw, Washington, Shelton became the first-ever woman finisher of the Bigfoot Challenge: eat, in one 30-minute sitting, “Sausage gravy, country-fried steak (I’m from the south and still have no idea what that means), four eggs, toast, hash browns—all atop a buttermilk pancake shaped like Sasquatch’s foot print,” as she later described it.

“I walked into the restaurant and they said no woman had ever done it,” she says. “So I did it.”