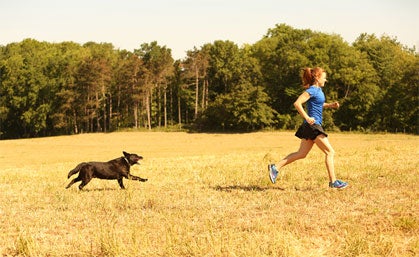 Author Jenni Hulburt and her dog, Murphy, running through the fields on the farm.

Editor’s Note: This piece originally appeared at JenniHulburt.com and is our top pick among entries into the August Trail Runner Blog Symposium: “Is there too much emphasis in the (trail-running) media on ultra distances?” You can read other highlights from the Symposium here.

As a research assistant in college, I landed a trip to the Badwater Ultramarathon in Death Valley, California. Over that four-day period, I met some amazing enduring people, traveled in one of the most extreme environments in the world, and got a glimpse of what ‘ultra-running’ is all about.

It changed the way I thought about running. At that time, I had never been on my feet for more than 23 miles in one bout.  It inspired me to run further, harder, and leave behind any excuses I did have. I realized there was another world out there, another breed of people, who didn’t live by traditional boundaries and distances. They seemed to live and run on their own terms, and I liked that.

The biggest realization I had was this: Who defines distances anyway?

Take the origins of the marathon for instance—simply a historical event of a memorable distance. If there is a distance which has gained attention in the running community, it’s 26.2 miles. The marathon has become mainstream and trendy – everyone is doing it. A beginning runner starts with a 5K race and if they keep going, they usually end with the marathon somewhere down the road.

What about the races beyond the marathon distance? What about ultras?

The standard definition of “ultrarunning” is anything past 26.2 miles. However, some consider the shortest distance for an “ultra” is 50 kilometers, or 31.07 miles.

Trail running and ultras are the perfect marriage because they both attract the outdoor-loving, adventure-seeking folks. While relatively fewer people actually cross the marathon threshold, ultrarunning is gaining more attention in the trail running community.

Question: Is there too much emphasis on ultra-distances?

Answer: It depends who you are.

Since being inspired at the Badwater Ultramarathon, I’ve realized that the kind of people who go long distances seem to have certain traits in common. They’re often the enduring, seeking, and rebellious type. Not only does this explain how ultra-runners go miles and miles in mountains, but it offers some hint towards why they go past the marathon distance, escape to the trails and push the limits.

I skipped the marathon and went the ultra distance when I set out for the 47 mile Rim to Rim to Rim in the Grand Canyon.  Prior to this, I had never officially run a marathon. In fact, I hadn’t even run more than 30 miles in one bout. I had been training for years, but 47 miles was close to the weekly mileage I had been logging for a while.

Some may call that poor training, and lack of appropriate progression. I saw the run as an adventure of a lifetime, defining new limits, and a chance to rebel from the marathon which was just … typical.

The most rewarding and memorable experiences in my own life have been a result of going against ‘typical’—spending a month in Maui after grad school to live and work on an organic farm, calling the back of a pick-up truck ‘home’ for a few weeks in between rental properties, running the R2R2R to celebrate a wedding anniversary. Marcus Aurelius said it well:

“The object of life is not to be on the side of the majority, but to escape finding oneself in the ranks of the insane.”

What’s on your list of insane? What feels rebellious? What inspires you to go further, get out of your comfort zone or escape ‘typical’?

Ultrarunning isn’t typical. In fact, in a sedentary and overweight society, running itself isn’t really typical. The way I see it, we all need more insane, escape and adventure in our lives. Emphasis on ultra-distances in the trail-running world might offer us just that.

Jenni Hulburt is a Health & Fitness Coach, and author of The Dirt Detox: a 21-day guide to getting dirty for your health. Through her blog posts and videos at JenniHulburt.com, she is leading the Nature Fed Wellness Movement, with the goal of inspiring people to live healthy and adventurous lives. You can find her on Facebook, Twitter and Pinterest.