Trail runners? Love a 3,000-meter runner? From Algonquin, Illinois? That just ain’t right. At a graceful 140 pounds, the cleanshaven Evan Jager, 25, would look like a baby next to Rob Krar and his grisly mane. Karl Meltzer was slugging beer before Jager was born. 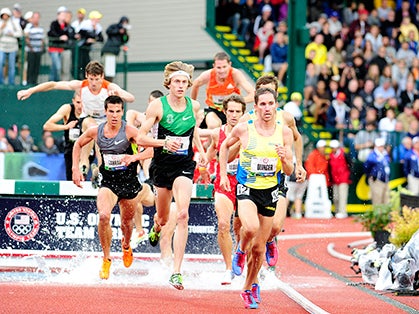 We trail runners are creatures of the woods—filthy socks and dirt-caked shoes warding off pavement and the rubber oval like talismans of garlic to the supernatural. Give us loose rocks and frozen slush and slick mud. Give us dusty legs. Give us eight-hour runs over the mountains. Don’t give us some hotshot track star.

Trail runners may disavow the delicate, slender-ankled athletes and the flapjack-flat quarter mile on principle, but to say there’s no overlap between the track and the trail would be a lie.

Just recently, Jim Walmsley—who was a 4:06 miler and 13:55 5K man at the United States Air Force Academy—careened his way to a first-place finish in the competitive Don’t Fence Me In 30K in the mountains of Montana. Max King, winner of the 2014 Chuckanut 50K, boasts a 10K road racing PR of 29:01. Megan Deakins, a contender in the 2014 La Sportiva Mountain Cup, ran a cool 16:32 5K while on the Duke University Track Team.

While some trail runners appreciate the sport’s quiet, peripheral existence, those of us who despair that cross country—or any other derivative of trail running—has not been an Olympic sport since 1924 may find comfort in the fact that there is one track-and-field event with off-road-running lineage—the steeplechase.

The event originated around the start of the 19th century as an equestrian race through the English countryside. Using church steeples (which were the tallest landmarks around) to navigate, mount and rider would dash from town to town leaping hedges, stone walls and rivers.

Horse contests gave way to foot races (Western States 100-Mile Endurance Run, anyone?) around the mid-1800s, and the steeplechase became a track-and-field event in the 1900 Olympic Games. The seven-and-a-half-lap race features 28 three-foot-tall barriers that runners must hurdle, and seven combination barrier/water pits. The 12-foot-long water pits, which become shallower farther from the barrier, are over two-feet deep to start, encouraging runners to leap off the barrier to clear as much of the pool as possible.

First dominated by the Finns (and then, briefly, the Swedes who had flash-in-the-pan fame in the event by snagging gold, silver and bronze in the 1948 London Olympics), Kenyans now rule the sport, sweeping the podium in the Athens and Barcelona Olympics and snatching two of the top three places in the steeple in every Olympic Games since Seoul in 1988. Kenyans have also claimed two of the top three places in the event in the IAAF World Championships (held every two years) since 1991, with the exception of 2003 where only one Kenyan made the podium. They swept the medals in 2007.

Kenyan runners hold 162 of the 200 fastest times ever run for the 3,000-meter steeplechase. That’s 81 percent. Of the fastest times ever recorded. In the history of the event. From a country that claims 0.6 percent of the world’s population. But poised to interrupt this East African dominance is a long-limbed, sweat-banded, Midwestern underdog. 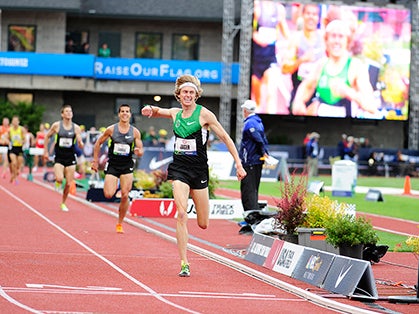 Jager is nothing if not enthusiastic after qualifying for the 2012 London Olympics. Photo courtesy of Phil Johnson, Tracktown Photo.

Evan Jager’s a kid who is all legs and hair, with a butter-smooth gait and a floppy blond mop. A former University of Wisconsin Badger, Jager is now a Nike-sponsored athlete living in Portland, Oregon who set the American Record in the 3,000-meter steeplechase in 2012 with a time of 8:06:81.

I remember the first time I saw Jager run. It was in 2009 during the USATF Outdoor Championship 5,000-meter race (one of the only times running has any chance of clamoring up amongst the television titans of football and NASCAR and golf). He took the lead with 200 meters to go and, even though he finished third, it was this gutsy move on the last lap that slung him into the mix with training partners Matt Tegenkamp and Chris Solinsky and bought him a ticket to the IAAF World Championships in Berlin. In the London Olympics he finished sixth in the steeplechase, just five seconds behind the winner (a Kenyan). The kid’s got potential. And he’s championing trail running on some of the largest athletic stages in the world.

Yes, there are national mountain-running teams and trail-running world championships and FKTs on the planet’s greatest peaks and races like the Hardrock Hundred Mile Endurance Run and Ultra Trail du Mont Blanc and plenty of other, truer, trail-running arenas. Yes, the steeplechase is a sterilized version of what used to be a cross-country competition. Yes, it’s wrong to boil it down and cage it up in a stadium. But the steeplechase is still a race over hill and dale at heart, and it requires the qualities of a good trail runner even though there are no trails. Endurance. Agility. The spunk to crash and trip and splash through water and keep on running. 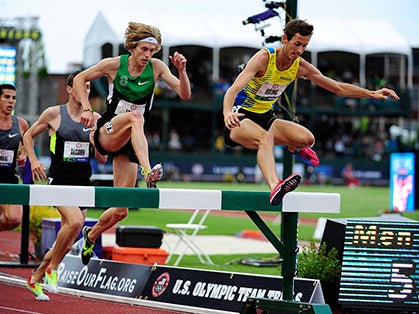 Jager leaps one of the 35 obstacles in the 3,000-meter steeplechase. Photo courtesy of Phil Johnson, Tracktown Photo.

We don’t need to draw party lines. If the masses want to taste the thrill—just in some little far-removed way—of a trail run, then they should be able to. Even if it’s while fanning themselves with meet programs from the shady comfort of stadium bleachers.

Look at the steeplechase as trail running’s ambassador to the track, and as a bond to our speedy cousins. There should be more tokens of friendship like this between our worlds.

A crowd gathers for every steeplechase race solely to see beautiful athletes leap barriers that once upon a time were streams and trees and haystacks and stones. Inside every steeple runner is the spirit and talent of a true mud-and-grass distance man, so if you need a trackman to cheer for in Rio de Janiero, then Evan Jager, the up-and-coming hometown talent—with his jackrabbit stride—is your guy.