As trail runners in 2015, it’s easy to take the fruits of a booming sport—mainstream-media recognition, hundreds upon hundreds of trail races, more trail-running shoes than we know what to do with—for granted. But as recently as a decade and a half ago, the sport looked very different.

To provide a retrospective snapshot of that era, Trail Runner collected a number of photos from the early years—1999, 2000 and 2001—of Nolan’s 14, a mountain run over 14 14,000-foot summits in Colorado’s Sawatch Range. Whether they instill in you nostalgia for the good ol’ days, or a sense of relief at how far things have come, we think you’ll agree: times have certainly changed.

For the full story of Nolan’s 14, check out “The Nolan’s Project” in our upcoming journal-style issue, DIRT: The Trail-Running Life. Subscribe now and get DIRT free with your subscription! 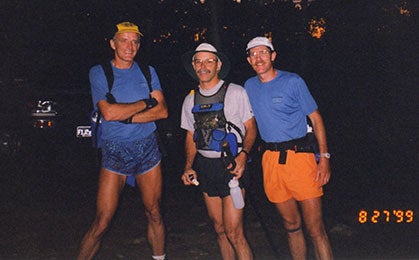 From left: Gordon Hardman, Fred Vance and Blake Wood at the start of Nolan’s 14 in 1999. Vance first had the idea for a run across a string of Colorado 14ers in the early 1990s, when he began looking for a challenge beyond existing trail ultras that stuck to the base of the mountains without going over any summits. He wasn’t able to bring the run to fruition until 1999, when he, Hardman and Wood gave it a shot. 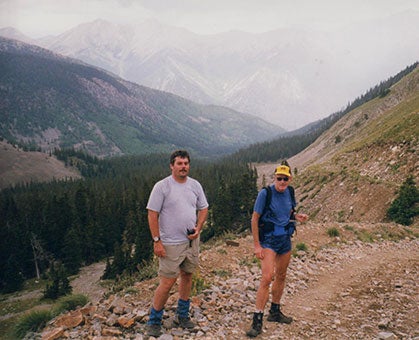 Jim Nolan (left) and Gordon Hardman on the descent from Mount Antero, the third peak, in 1999. Nolan was a colleague of Vance’s in the early 1990s, when Vance first had the idea for a monster linkup. Vance went to Nolan, who was not a runner but a serious mountaineer who had climbed all 54 of Colorado’s 14ers, and asked him to fit as many 14ers as possible into 100 miles. As Vance recalls, Nolan came to work a week later with a stack of topo maps, pointed out the Sawatch Range and said, “Here it is. Fourteen.” In 1999, Nolan was there to crew for Vance and the others. 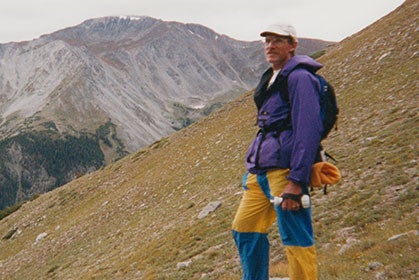 Blake Wood ascends Mount Columbia, with Mount Yale in the distance, during the 1999 run. “I guess there was Gore-Tex then, but I didn’t have any of it,” says Wood of that first year. He wore a single-shell rain jacket, home made blue-and-yellow parachute pants (pictured above) and “just a regular old pair of running shoes.” 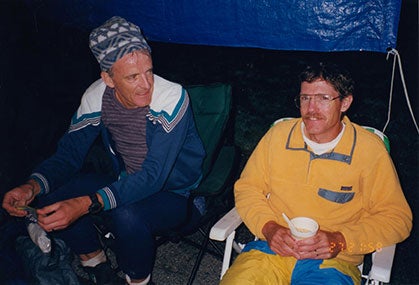 Gordon Hardman and Blake Wood at an aid station in 1999. Hardman and Wood, faster runners than Vance, pulled ahead early in 1999, and stuck together until, some 36 hours and seven peaks in, they decided to hike out after missing two aid stations and running out of food. 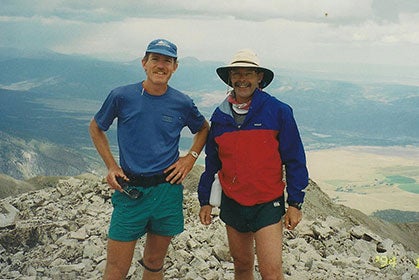 Wood (left) and Vance on Mount Princeton in 2000. After 1999, Vance stopped running Nolan’s himself in order to focus on the logistics of supporting the others, but Wood ran again in 2000. Despite violent storms that year, he made 11 summits, ending on Princeton, then a course record. 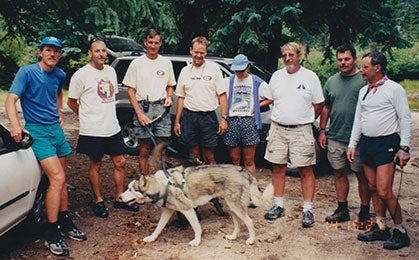 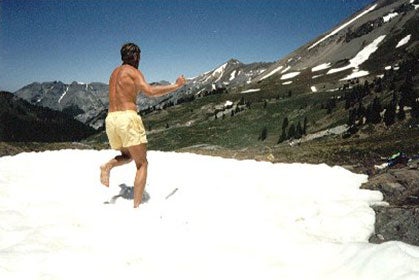 Matt Mahoney running barefoot through snow near Engineer Pass on the Hardrock Hundred course, training for the race in 1999. (Mahoney, based in Florida, would do the same on the sand of his hometown beaches.) Mahoney, who maintains an unofficial but authoritative website on Nolan’s 14, first met Vance in 1998 at Hardrock; both were lost, and finished together in 51:38, well over the 48-hour cutoff—”still the unofficial course record for the longest DNF,” Mahoney jokes. Vance invited Mahoney to run Nolan’s in 2000. 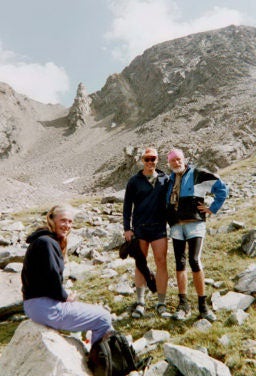 Hans Dieter Weisshaar (right) and his wife Suzi (center) on a scree slope below the Missouri Mountain summit in 2001. Weisshaar, from Germany, would tour the U.S. in an R.V. every summer, running ultras like Hardrock. He first ran Nolan’s in 2001. 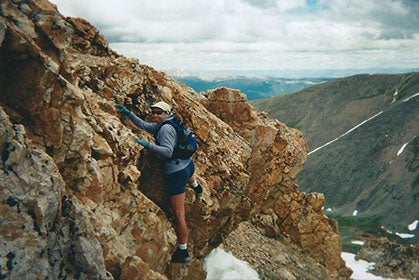 In 2001, Nolan’s had a mid-race wedding. One of the runners, Steve Bremner, center left, married Laila Hughes, center right, on the 11th summit, Princeton. Jim Nolan officiated, on the authority of what he himself calls a minister’s license from a “tax-scam church.” Eric Robinson, left, and Ginny LaForme, right, happened to reach Princeton a few hours before the ceremony, and served as best man and best woman. Though they were just friends at the time, Robinson and LaForme would themselves get married a few years later. 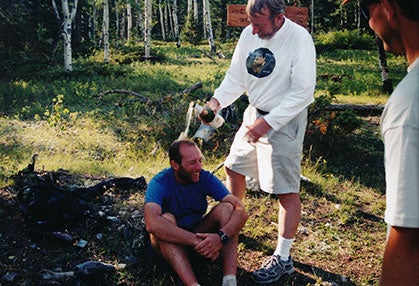