A 12-foot wooden wall stands in the middle of the trail. It is plastered with muddy footprints from the previous contestants … 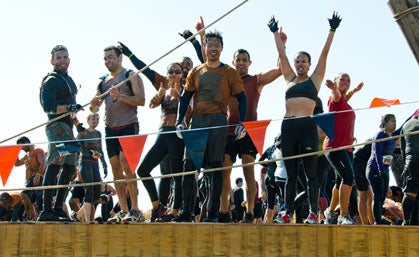 Photo by Matthew Reitman – Team Hope for Hope celebrates after finishing a tough mudder. They raced to get sponsors to donate to their non-profit.

A 12-foot wooden wall stands in the middle of the trail. It is plastered with muddy footprints from the previous contestants who have somehow made their way up and over it. The more people that come along, the more creative they get at overcoming the barrier that stands between them and the rest of the obstacle course. However, any time someone clambers over the top, it’s with the help of several teammates. Whether they pull their friends up to the top, launch them up or push them up using their shoulders as steps, eventually everyone gets over. Then the runners take off again, headed toward the next obstacle, which could be anything from fire to live wires harboring 10,000 volts of electricity.

Mud runs are races that challenge anyone brave enough and crazy enough to try them. The races across the United States will have close to 1000 finishers or more. For many competitors, though, participation in mud runs is as much about raising money for a bigger cause.

Reitman is a co-founder of the non-profit organization Hope for Hope, which works to provide the four hopes—food, shelter, water and education—to children. After a little more than a year, the organization is a month away from breaking ground in Kenya to build their first children’s home. They’ve raised money through donations, basketball tournaments, bar crawls and running a tough mudder as a sponsored team.

“We figured it’s nice to offer something other than just donations, something for people to participate in,” he says. “Then, not only are they giving money to something, they’re helping generate funding.”

On October 20th, Reitman and his team of 15 took on the Tri-State Area Tough Mudder, and raised $2280 for their Kenya project.

Says Reitman. “A lot of people [donating money] feel a sense of ownership in our project and that allows them to take pride in what we’re doing as a team.”

The same compassion that drives the team to raise money for the non-profit is apparent throughout the 12-mile course. “People aren’t shoving each other aside; they’re reaching back to help the person behind them or trying to help another person over an obstacle,” says Reitman.

However, the camaraderie doesn’t mean people aren’t also out there just to compete. Like any running event, according to Sean Rogers, the creator of the Civilian Military Combine (CMC), there are two groups of people who typically do mud runs: the athletes seeking personal records and/or wins and the fun-loving runners who are just trying to finish. This realization led him to create CMC, a race that tests competitor’s perseverance on a course designed by CrossFit coaches, United States Armed Forces and USA triathlon race directors. The race starts with the pit, which includes four 90-second strength exercises in an areana followed by a five-mile obstacle course. 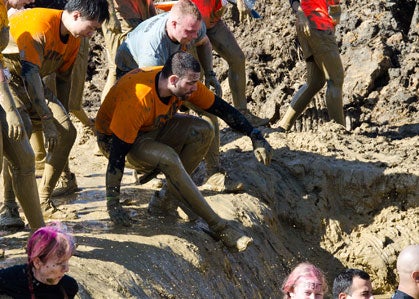 Photo by Matthew Reitman – Founders of Hope for Hope, Daniel Reitman and Chipeng Liang, jump into a mud pit during the October 20th tough mudder.

“We’re giving people an even playing field by allowing strength to actually play a factor,” says Rogers. “So the endurance athletes don’t always have the upper hand.”

The goal of CMC is to allow civilians to run alongside military in one day of competition. Rogers and his co-founder, Matt Keller, have done marathons, triathlons and other athletic events to raise money for different military charities.

“We wanted to focus on the military in a way no other races had,” says Rogers. “So, before and after. That was our goal.”

The race allows runners to try their hand at 20 to 30 military obstacles throughout the five miles.

“My favorite thing about CMC is when a person overcomes a fear, whether it be the pit or the course itself,” says Rogers.

When the runners finally pull themselves up, or get pushed up the vertical 12-foot wall, they turn around and offer a helping hand to the next person. These racers are doing more than just helping each other finish. They are also helping charities worldwide.