I had 24 hours to think about it 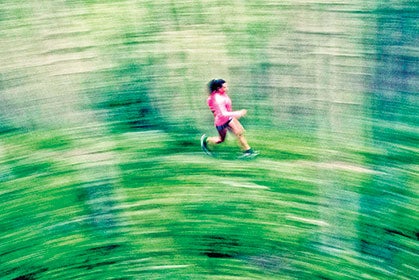 The straight, paved, pancake-flat stretch of bike path I’m running on feels like a circle in Hell. No, make that a rectangle in Purgatory.

By now I am quite familiar with each part of this rectangle, which measures precisely 1.061 miles, because I’ve run it clockwise 67 or 68 times (it’s easy to lose count). Attempting my first 24-hour ultra, I watch the competitors in the 12-hour division finish and celebrate, putting me in a funk. Sixty of us keep going into dusk.

I am a trail runner and, for some reason I can’t recall, have consigned myself to something that feels like a track. Over and over.

I started at 8 a.m. with a goal to run at least 114 laps—120 miles. Now, a chair and a nap seem irresistible, and it takes the mantra “You snooze, you lose” to fight back.

Stop complaining. Find something different to see each time around.

Here again is the edge of the murky lagoon where a leggy white egret wades. Over there, in a jumble of fenced-off construction sites, heavy equipment waits to resume weekday work repurposing old military buildings.

Two more sharp right-hand turns, and I’m back on the paved bike path. Careful—here comes that single crack in the asphalt that I already stumbled over. Another runner face-planted there. We’re so lulled by repetition and uniformity that we trip over one crack.

The Golden Gate Bridge wears a glimmering necklace of yellow lights, and beyond it beckons the silhouette of the land mass called the Marin Headlands. Many times, I’ve run over the bridge and hopped on a trail that goes over that ridge.

A week ago, a lecturer at my kids’ school used the metaphor of trails to describe curriculum. The best lessons, like trails, are not always straightforward, she said, nor easy to traverse. They take us to new heights, to places we couldn’t see or imagine from the trailhead. They make connections with other trails and sometimes circle back. They challenge us, surprise us, expand our vistas.

Will this rectangular path start to teach me like a trail if I keep running it? What makes a trail a trail, and when does trail running become just running?

Night wears on. While my body moves doggedly, registering pain in the right Achilles tendon with each pivot turn, my mind travels through the fog to a place between reality and illusion. All-too-real rats and raccoons scamper toward trash, and then bushes morph into unreal shapes like sculptures and animals.

To clear my mind, I chat with others on the course as we transition between running and walking. Over and over.

Chirping birds herald dawn, and then light appears on the horizon.

An early-morning walker bundled up as if it’s winter throws a ball for his mutt. More cars drive down from the bridge; more bikes pedal past on the path. It’s a summer Sunday in San Francisco, and the morning bursts with potential—a feeling that gets me running again.

Every type of running teaches and challenges us. On a one-mile quasi-trail, I learn about a day in the life of a place and about a thing called persistence.

Sarah Lavender Smith, a contributing editor at Trail Runner, made it 115 miles for the women’s win at the San Francisco Summer Solstice 24-Hour event. This article originally appeared in our October 2015 issue.

Why Elite Athletes Are Getting Serious About Mental Coaching