My summer on tour, running trails with a rock star 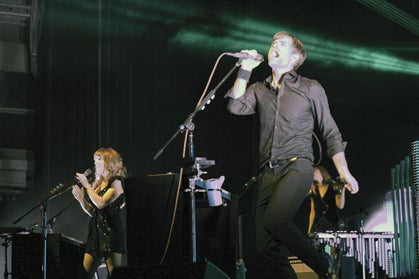 The subject line read light and bouncy, like I was hearing back about a science camp counselor position. So, when I realized the sender was Ben Gibbard, lead singer for Death Cab for Cutie and The Postal Service, I was caught off guard. I opened the message:

Nick, I’ve got a proposition for you…

In return: Stipend, bunk on the tour bus, flights, hotels and catering.

The only thing more surprising than receiving this message was how I met Ben Gibbard. I was living in Mexico last winter, and the local music festival invited Ben as a special guest. During his stay, his manager contacted me to take Ben trail running. Now, make no mistake: Ben Gibbard is a trail runner. He’s no jogger or weekend warrior or an I-touch-dirt-once-a-month-only-so-I-can-wear-my-sweet-fanny-pack type of trail runner. The guy pounds dirt often, and fast.

While sharing Mexican singletrack, I learned that The Postal Service was going back on tour, 10 years after releasing their only album, Give Up. This record meant a lot to me—a nostalgic soundtrack howling its way in and out of synth and reverb, each track attached firmly to memories of unstable relationships and exploratory teen years. I was thrilled to hear of its resurgence and upcoming tour, and it was only weeks after our time in Mexico that Ben extended the unexpected offer to join his tour as Trail-Running Coordinator. 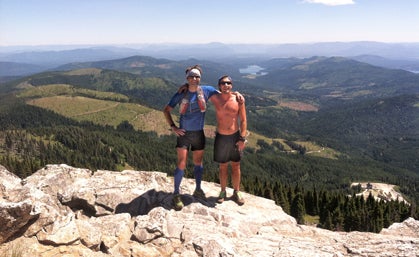 I met The Postal Service in Spokane, Washington, for their West Coast and Midwest lineups, traveling with them for over three weeks. They played 15 shows in 11 cities, and I coordinated 15 trail outings. Ben’s focus race was the Squamish 50K, one of Canada’s most brutal mountain ultras, so I sought out the steepest routes I could find. Starting with trails in the Pacific Northwest, we headed to Southern California, where, in between sold-out performances, Ben and I climbed peaks east of San Diego, and gutted out 17 punishingly hot miles in the Santa Monica Mountains. Heading north to play at Berkeley’s Greek Theatre, we spent a day in the Marin Headlands, weaving through trails wrapped in fog and guarded by redwood brawn.

From there, the band flew to the Midwest, where I had the interesting task of locating trails in unfamiliar (and awfully flat) territory. From dodging bobcats and white-tailed deer in Kansas City’s Wyandotte Park to running repeats on a ski jump near Minneapolis, I relished in discovering such gems. The tour climaxed in Chicago, where The Postal Service headlined Lollapalooza and played in front of 45,000 crazed fans.

Then, suddenly, the tour was over—but our trail adventures weren’t.

Ben and I traveled up to Canada and both raced the Squamish 50K, with 8000 feet of relentless elevation gain. Ben ran the gauntlet of highs and lows to finish in just over eight hours—top 20 for his age group. We were both ecstatic with our performances, albeit less thrilled with the six stitches added to Ben’s shin, due to a hard fall early in the race while cruising down a cascade of rock and root. The race was clearly a capstone, an electric ending to a month of my life that will remain unmatched.

As I reflect on my time with The Postal Service, one memory keeps resurfacing. At the end of every show, the band would perform “Brand New Colony,” a melodic track bleeding hope and renewal. Ben would ask the crowd to sing the last three words with him:

Every time I heard this phrase, I caught glimpses in the crowd of tear-stained faces screaming these words, fists pumping the air, couples kissing. And something came into focus. I realized that it is impossible to anticipate the future, to know what’s around the trail’s bend. Whether it be a bobcat, a new relationship or a summer dream gig, absolutely nothing is certain but life’s uncertainty.