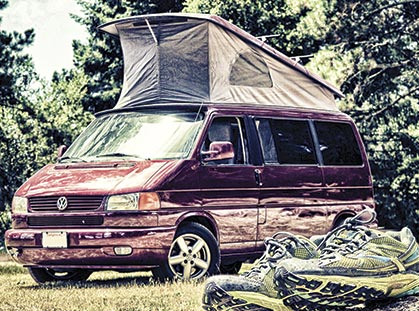 I had wanted a VW camper van ever since fifth grade, 1979, when three of my friends’ moms had them but my much older mother had a Datsun that smelled like cigs. My friends’ vans meant beach trips, parties, carpools and cool moms.

I wanted one so badly that 10 years later, when my then-fiancé, Morgan, and I took a trip to check out law schools, I made him go to an RV sales lot to look at tricked-out Westfalias and Minnie Winnies. As I stood inside a van conversion and described the road trips we could take, his gaze shifted from the curtains to the dinette table and back to me.

“It’s hideous,” he said with a look that questioned whether we were meant to spend our lives together.

Fast forward 25 years. I’m skimming Facebook on my iPhone in bed as my vision blurs from two glasses of Chardonnay and too little sleep. Suddenly I stop scrolling to stare at a picture posted by an ultrarunning friend. It’s of a VW Eurovan with a pop-top and fewer than 100,000 miles.

I elbow Morgan, who’s reading on his iPad. “Look! It’s for sale!”

I shove the phone in his face. “It’s what I’ve always wanted!”

Instantly, I research the make and model, confirming my snap judgment that it’s a great deal. No, more than a great deal—destiny.

In my mind I merge my three big loves—family, trail running and travel—with this van. I picture our teenage daughter and son laughing in the back and playing cards at the nifty little table, as if they still played Crazy 8s together instead of Snapchatting. They’d pull sodas out of the built-in cooler and make first dibs on the pop-top. We would arrive at a campground in the redwoods for a race, and they would crew and cheer, “Go, Mom!”

I explain to Morgan, “The seats fold down, so it sleeps four. We wouldn’t have to stay in a Holiday Inn Express.”

“You know how much we like hanging out at finish lines,” he deadpans.

“I know,” I say. I no longer ask Morgan and our kids to come to my races, having more than once found them waiting with tired, stoic faces that reveal they’d rather be elsewhere.

“The thing is,” I continue, “I’m not getting any younger, and neither are these vans. It’s now or never.”

His compassionate side feels my angst over turning 45. His practical side tells him that having a spouse whose midlife-crisis car costs less than $25,000 is not such a bad thing. With a softer tone, he says, “Maybe you should check it out.”

I message the seller, saying I absolutely am interested and want to see it right away.

The next morning, I realize my mistake: in my late-night haze, I had thought the seller was Rob who lives two hours away, but it’s actually Rod in another state. The absurdity of flying somewhere to buy a vehicle I’ve never test-driven and don’t really need sinks in.

I tell Morgan I got cold feet. I tell Rod not to save it for me after all.

Morgan utterly surprises me with a one-line e-mail: “I think you should get it.”

I immediately phone him back and shout, “Are you serious? Does that mean you want it?”

My shoulders sink. Then he adds, “You have to accept the fact that it’s your dream, your van. If you think you can use it, and if it makes you happy, why not?”

My husband has just put a new twist on the same conversation we’ve had several times. Running is my thing. He is happy for me when I finish an ultra, but he doesn’t want to pace or crew me, just like the kids don’t want to run cross country or sign up for 5Ks. I used to mind but am OK with all of that now. This ability to negotiate some freedom within the family unit to pursue individual passions has become part of the glue that bonds us and makes our time together better.

I fly to Bend, Oregon, and buy the van. It becomes my sleeping pod and changing room before a race. An inspiration, an adventure, a balm for aging. And even, once in a blue moon, a family car.

Sarah Lavender Smith, a Contributing Editor at Trail Runner, can’t wait to use her van to crew at the Hardrock 100.

> Snag a year’s subscription to Trail Runner for just $2.75/issue!