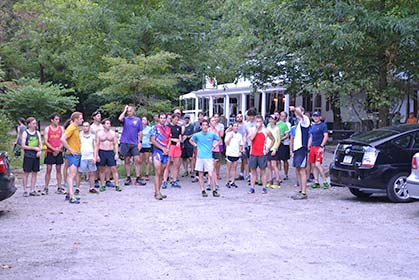 The start of a Thursday-evening trail race in May at the Wissahickon Valley Park, outside the Valley Green Inn. Courtesy of Dan Gordon.

It is 6:30 p.m. in downtown Philadelphia. Cars honk, buses squeak and music blares from the open doorways of bars just coming to life. But 10 miles away in Wissahickon Valley Park, all is quiet, save for the wind and the pitter-patter of runners’ footsteps against freshly fallen leaves. Part of Philadelphia’s Fairmount Park system, the Wissahickon Valley Park is not what you would expect to find in a crowded, Northeastern city, and for the Philadelphia-based Wissahickon Wanderers it is an invaluable resource.

Dan Gordon founded the club 15 years ago because he needed insurance. He was a long-distance relay runner, and routinely traveled to races throughout North America with a group of Philly-based friends and teammates. In 2002, they wanted to host a race to celebrate the recently refurbished high-school track. Gordon, however, didn’t want to put on a race without insurance, and the cheapest insurance was through the Road Runners of America (RRA). In order to purchase the insurance, Gordon had to register a running club, which he founded on the spot. The newly dubbed Wissahickon Wanderers found their way onto the RRA website, and soon Gordon’s inbox was flooded with emails asking, “How can I join?” and “Where do you work out?” Rather than turn people away from the sham club, Gordon started organizing weekly runs and events.

“The Wissahickon is a fantastic resource for trail running,” he says. “It was calling for a running club to promote the area, and we just sort of fell into it.” 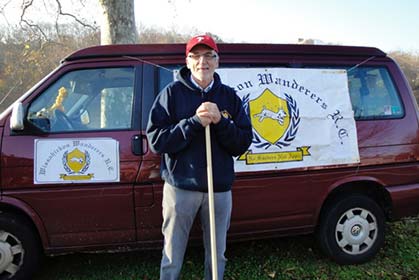 Founder Dan Gordon manning a water station at the Philadelphia Marathon, with the camper van that transported Wanderers to races for 12 years. Courtesy of Dan Gordon.

The 1,800-acre Wissahickon Valley Park boasts 57 miles of trails on steep, rugged and technical terrain, enough to satisfy everyone from the trail-running newbie to the podium-bound speedster. “I can run for 10 miles and hardly see another person,” says 30-year-old Sean Reisman, who has been running with the Wanderers for two years.

One of Reisman’s favorite runs, called the Four Corners run, loops around the perimeter of the park, covering roughly 22 miles (or 25 miles, depending on who is leading) and climbing approximately 3,000 feet. Chris Moore, 42, has been a Wanderer for nearly 14 years, and also cites the Four Corners run as one of his favorites. He should, because he created it.

“I didn’t have much experience as a runner when I first joined the club,” he explains. “One day, another guy and I just decided to try to run the entire circumference of the park. It came out to 16 or 17 miles and we called it the Four Corners run. As we came to know some of the more remote trails, we added on to the course.” 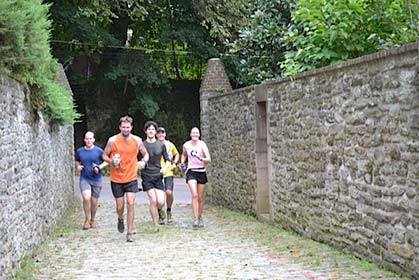 To become a Wanderer, all you have to do is show up. There are no dues and anyone is welcome, regardless of speed or experience. The club meets for group runs twice a week at the Valley Green Inn, conveniently located adjacent to the park. The Inn serves as trailhead, parking area and post-run hang-out spot, where everyone gathers for beer and grub. “We are a laid-back club, and historically not very competitive,” Moore says. “We have a mix of people who run fast and slow, and they all coexist and commingle.”

This attitude is reflected in the Wanderers’ races, most of which are free. To avoid the bureaucratic red tape of applying for permits to hold a race in the park, the club simply keeps its races small and low key. The Wissahickon Trail Classic is the only race with a fee. It benefits the Wissahickon Restoration Volunteers, one of the several organizations that maintain the trails in the park.  Several hundred from the Delaware Valley sign up each year to run the 10K course, which starts on the gravel Forbidden Trail along Wissahickon Creek before heading onto hilly, wooded singletrack.

Other races, like the Fall and Spring Trail Series, never go beyond the 50-person park limit. The Trail Series take place on Thursday evenings in September and May. The course changes each week—each race is designed by a different Wanderer, takes place in a different part of the park and features unique themes or obstacles. One race featured a cupcake-related time-bonus challenge: participants multiplied their age by the number of Philadelphia Eagles cupcakes they ate before the race, and deducted the resulting number from their time. Another race involved a 10-second time bonus for every piece of trash a racer picked up on the course and carried across the finish line. Reisman explains, “The gimmicks add an element of comic relief, which is often missing in competitive running.”

“We’re not performance driven,” Gordon emphasizes. “We take more of a communal approach to running.” There are some competitive racers in the Wanderers’ midst, but at the end of the day it doesn’t matter if you’re running a 5:50 mile or a 10-minute mile. Everyone just wants to hang out.”

Favorite post-race beer and grub: The Valley Green Inn, which dates back to the late 1800s