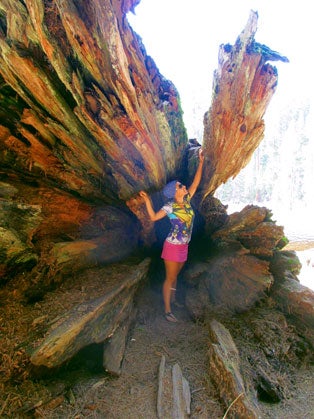 Editor’s Note: This piece originally appeared at Vanessa Runs and was our top pick among entries into the May Trail Runner Blog Symposium: Social Media—Bane or Boon to Trail Running? To see other submissions, check out our May Symposium Highlights.

This week I sat under the shade of one of the largest trees in the world, handed Shacky the camera and didn’t take a single picture. I folded my legs over a slab of rock, and watched tourist after tourist line up, take a photo and move on.

I took my time there. I took deep breaths, gazed upward, and wondered everything there was to wonder about that tree, the General Grant at King’s Canyon National Park.

The last few days have been a frenzy of travel, photography and trail running. We have rushed from one National Park to the next, photographing the glorious sights, running through paradise and sharing our experiences online. It has been rewarding, but intense, and I feared I had forgotten what it felt like to just sit under the shade of a giant tree.

For two days we had no wifi or cell service. Running through the forest, I caught myself thinking, “I can’t wait to post this on Facebook!” The term, “Photos, or it didn’t happen” came to mind, and I realized I have slowly come to really believe that. It scared me enough to not take a picture of General Grant.

The day after entering Sequoia National Park, we ran the Marble Falls trail. Near the end of the route, the trail became narrow and the ground was loose, causing my right foot to slip and tossing me straight over the mountain. It was like the ground gave out under me. One second I was running, and the next second I was eye-level with the dirt, and still slipping.

I threw my arms up, and Shacky caught my hand before I disappeared completely. He pulled me out with nothing more than a few scrapes on my ankle.

We took a couple of photos of my wounds and the Vanessa-sized hole I left in the bushes, but they didn’t look gruesome enough to post on social media. So I didn’t. This decision was followed by a strange sensation that my fall, if undocumented, didn’t really count.

That evening we camped near a rushing river across from the trailhead. It was close to the road so the dog was allowed out, but late enough in the evening on a weekday that the space was abandoned. We let the dog and the cat outside, watching them sniff and play. I went inside to put some food out for the cat and that’s when I heard Shacky yelling.

“What’s going on??” I asked, as he rushed Ginger inside.

“What??” I practically fell over myself trying to reach the camera. Thankfully, kitty smelled her food and had already dashed inside on her own accord.

Shacky later made fun of my photo instincts in a Facebook status update, only to find that most people agreed that a photo would have been preferable to rushing the animals inside.

We never did get that photo. The bear disappeared down the stream as quickly as it had come, but for a few days I was proud of my quick-thinking photography instincts. Then I started really thinking about it, and now I wonder just how proud I should be…

The week was nearing its end at Sequoia National Park and I hadn’t updated my Dailymile account for days. “If I don’t do it by Sunday, it’s going to automatically post my weekly mileage and it won’t be right!” I thought to myself.

For Alec Zimmerman, a young woman from Washington, going off the grid had much more serious consequences. Alec was hitchhiking through South America, and found herself without Internet access for a total of six days.

When she finally did log into her email, she discovered her “disappearance” had become an international incident, and the FBI was searching for her. Except she was never lost. She was just off social media. For SIX days. Beth Whitman tells the full story on Wanderlust and Lipstick.

“Without the pressure of having to check email, update your status on Facebook or tweet a photo about your latest meal, you’re FREE! Free to actually live in the moment and enjoy the experience rather than worrying about how to capture it.

I know there’s a camp of travelers that stays connected–tweeting about their travels and posting to Facebook regularly while on the road. And, look, I’m guilty, too, of posting my travel photos and food pics. But I’m saying that there IS value in spreading your wings without succumbing to the addiction of constantly being online.”

I nod solemnly at Whitman’s words, yet I secretly wonder if I really know what that type of freedom feels like. Back in Sequoia, when we heard of free wifi a couple of miles up the road, we immediately drove there instead of spending the night at the next trailhead like we had planned. We update our statuses, posted some photos and felt better.

Ever since hitting the road for full-time travel in the RV, social media has taken a new role in my life. No longer available to me 24/7, I am online less, but feel more of a responsibility to share.

I don’t mean responsibility in a bad way, because I am passionate and excited to take photos, write about our adventures and share our experiences, but I also know that people have come to expect that. I know people are waiting for the next album, the next blog post, the next status update. And I am so eager to please that I can forget to keep some moments to myself, quietly tucked away in my memory as intimate experiences.

Social media is not bad. It is a tool for sharing. Just like blogs, or photography or newspapers. It is neither good nor bad—it can go either way. It can be used to inspire, connect with our communities or showcase beautiful trails. It can also be used to waste time, rob us of the present moment, or distract us from our beautiful surroundings.

Yesterday I posted on Facebook looking for suggestions on where to run in Yosemite National Park. Without minutes, I had a new Facebook friend: Matt Holly, a Yosemite park ranger. The next day, we were shaking hands and he was handing us maps to his favorite local trails “where most people don’t go.” We later picked him up from work, drove him home, and will be spending the night camped out in front of his house, sharing our beers.

These connections are invaluable to us as nomads. When every day we are faced with new and unknown places, social media serves as our only comforting link to the familiar, connecting us electronically to valuable tips, trail suggestions and locals eager to show us some hospitality.

I need to look up at General Grant and have my first thought NOT be about taking another picture. I need to sit under its shade, take a deep breath and know this really happened.

Vanessa Runs is an avid ultrarunner and author of The Summit Seeker. She lives and travels full-time, running trails across the country. Follow her at vanessaruns.com.