A full circle of fourteeners 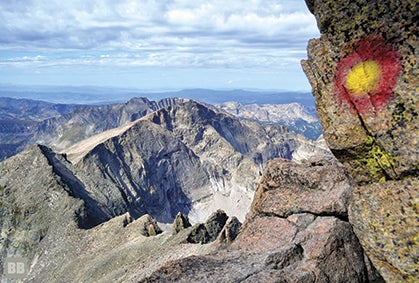 Roiling up through the layers of constrictive obligation, like some volcano that would blow if not vented, was the magma of unfinished business. The thought of not summiting Colorado’s highest mountains simmered in me for decades.

The notion arose with a trip to Rocky Mountain National Park in the early 1980s with my brother and his girlfriend. We strapped on our work boots and metal frame packs, and set out to climb the highest mountain in the park, Longs Peak (14,255 feet.) We made it above timberline to Chasm Lake, but rain and the fact that his girlfriend was headachy and vomiting foiled our plan.

I remember staring up at the Diamond Face of Longs wishing to know the view from its crown.

That trip confirmed my desire to move to Colorado so I could live in the mountains, and I did. Back then there were no mountain guidebooks that I knew of. If I saw a mountain I wanted to climb, I drove as close to it as I could, and just started up. This practice led to a lot of bushwhacking and dead ends, but a lot of summits, too.

In the mid-1990s when someone published a guidebook to Colorado’s 54 fourteeners (mountains over 14,000 feet), I was skeptical. I was accustomed to finding my own way. But when a friend, Dennis Webb, invited me to climb a remote peak and we were able to find the trailhead in the dark and then the route with ease, I converted. Soon we were obsessed, studying the guidebook and planning weekend trips.

This activity put me in such good shape I started winning races, which inspired my trail-racing obsession.

In 2000, Dennis finished climbing all the fourteeners. I accompanied him on his last. It was my 48th summit.

My fourteener fever subsided when Dennis moved on to other summits, and I began racing every weekend. But the thought of not finishing off the highest peaks kept nagging at me. I told myself I’d complete them before I turned 50.

That all fell apart when I had a head-on collision with a truck on my motorcycle and nearly died.

During the recovery process, I had time to think about things left undone. Not finishing the fourteeners was among them. Walking myself back to recovery, I vowed to finish those last six peaks before I turned 51.

Except for one, I finished the remaining fourteeners alone, running to the summits and back down. Then in September I headed back to Rocky Mountain National Park and spent an afternoon watching distant hailstorms on Longs Peak, the final uncompleted summit in the set. Lying on the tundra with me were 13 bighorn sheep. I accepted that as a good omen before meeting up with Dennis Webb and Andy Crisconi at the trailhead.

Andy is an avid climber who runs an adventure-travel company. He and Dennis have been climbing the high thirteeners in Colorado. We’ve all been friends for years. They agreed to join me on my last fourteener summit, though both had previously climbed the peak.

Longs was one of two peaks I had ever failed to summit because of weather. I was denied twice, once because of rain and again because of snow.

We three were up at 4:30 a.m. and on the trail shortly thereafter, hoping to beat bad weather to the summit. Headlamps lit the way above our form-fitting packs and light shoes. We reached timberline before the sun came up. Good conversation carried us upward. Deep questions like, “What’s it all about?” were asked, but never really answered.

After five miles the trail became technical, and it was slickened by the previous day’s hailstorm, but with good boots and careful climbing, we reached the crown without incident. I stood, raised my arms for a moment, and peered over the edge of the 1,000-foot Diamond face to Chasm Lake another 1,000 feet below. Finally.

For a moment it felt like I’d accomplished something, that is, until I saw a 20-something guy climbing up the same route we did, barefoot in flip-flops. Maybe it’s time to step it up a notch.

This article originally appeared in our January 2014 issue.