Leashing the energy of the worst-trained dog in the world 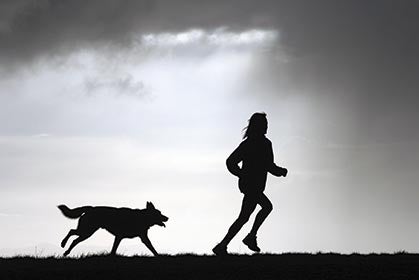 Fine. If you’re one of those militaristic types who define “good behavior” as a pup never once chewing a tube of its mom’s Body Glide, or worse, never once eating the liner out of her running shorts. Or riding to the trailhead like a statue in the back seat, allowing nary one yip of high-pitched excitement to announce your arrival to the sleeping neighbors. Or lying dutifully on your blanket, while the humans gather around the dinner table and chow down on T-bone steaks.

Then fine. I have never asked a dog to give up on life.

I only have two rules for my dogs. First: Be gentle with children. And second: Show some trail manners while running. If they can manage those, then I can tolerate the noise violations, mealtime panhandling and even ripped upholstery.

We couldn’t figure out what type of dog he was. A blue-eyed, coyote-Shepherd love child? I wanted to call the little mutt Bone Daddy. The boyfriend liked the sound of Pickles. We couldn’t agree, which was fitting, since in hindsight the puppy was a last-ditch effort to save our relationship.

After a week of addressing the little fella as TBD, and an otherwise silent war, we finally came to an armistice: Bandersnatch. It was a throwback to happier times, named after an idyllic section of singletrack in Ashland, Oregon, the little mountain town where we fell in love—a green and steep-sloped paradise where, of course, all the trails would be named after Lewis Carroll characters.

In our nostalgia, though, we created a mouthful. Bandi, Banders, Bandy-Boy became commonplace. Whatever you called him, it was evident from early on that the creature could flat-out run. He’d run with anyone, anytime, any distance. It was a good thing, too, because his father and I had recently rounded the final curve of our bell lap and could each use the company.

I should clarify here that I’m talking about the figurative last lap. We had stopped running together in the literal sense years earlier. Because here’s the curious thing about love and sport: They don’t mix.

We had coined the term “two stepping,” although I’m told in cycling it’s called “half wheeling.” It happens when someone, usually of the male variety, runs two steps ahead of you. You take two quick steps to catch even, then they—supposedly subconsciously—speed up to reclaim their two-step lead. You catch up; they pull ahead, ad infinitum. Or at least until the day you find yourself dropped to your knees on the trail, heart rate cresting 200 and punching the dirt in frustration, vowing never to run with that two-stepping son-of-a-bitch ever, ever again.

Here’s the other curious part of love and sport: They don’t un-mix. I’m told otherwise: stories of scorned lovers throwing themselves into running, dropping their marathon time by 30 minutes and thanking their post-break-up angst for finally getting that Boston qualifier.

But that storyline has never worked for me. When my heart is heavy, so follow my legs. I can’t run uphill with my heart dragging to the ground like a lead weight. I can’t breathe when an unsung sob clogs my airway.

I’ve found that running doesn’t bring happiness; it augments it. You can’t show up empty-handed and expect the magic to rain down upon you. There’s magic to be harvested, but you have to lace your shoes with at least the slightest seed of a smile.

Yet there was that hellion. Bandersnatch. The worst-trained dog in the world. Had he been a good boy, he might’ve lain around with me all day, licking my tears and grunting tired little puppy noises. Instead, he raged around the house like a tornado, destroying everything in his path. When he’d gone through all the lube and shorts, he moved on to sponges, then ski boots, then cabinetry. Nothing was safe.

There was only one way to stop him. I had to get up. Pull on a pair of running shorts. Drive the caterwauling, tail-wagging, shotgun-riding bundle of fur to the trailhead. Smile, or at least fake one. Then two step that little bastard into the ground.

Jenn Shelton lives outside of Durango, Colorado, where she runs through dogsitters at world-record pace. This article originally appeared in our October 2014 issue.