One veteran’s account of how trail running helps him cope 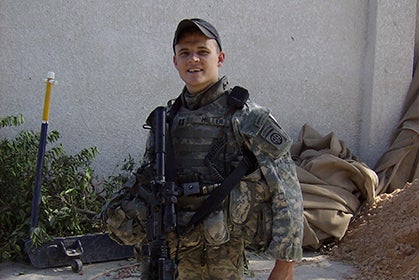 The author in Iraq. Courtesy of Joe Miller

Almost every day, I wake up sick and disoriented. It will never be clear to me whether I am sick from the stress of living with post-traumatic stress disorder (PTSD) from my tour in Iraq, or from the legacy of blast concussions. Depression and thoughts of suicide never seem to leave me, no matter how many hours I spend in a therapist’s office or studying war trauma in graduate school. War has made me prematurely old and worn down.

And yet a part of me will always miss it. At war, I knew that the actions of my platoon saved lives, so I stayed on the line without seeking the care I needed. Every time I corrected a major helmet deficiency during parachute inspections in the 82nd Airborne, I was potentially saving the life of a young paratrooper. In fact, every decision I made had the potential to save lives—or result in the death of my soldiers. Back home, it was hard to match the intensity of commanding troops under fire and the extremes of parachute jumps. I missed the way life-or-death situations channeled all my energy into every moment in a way that cleared my mind, a state Kurt Vonnegut called “living in your spinal column.”

For a long time, I wanted to manage my PTSD symptoms away. I focused heavily on my work as an Army ROTC instructor in the hope that, over time, my PTSD would become less acute or go away on its own. I eventually realized that this was impossible.

In the Army, I had grown accustomed to trail running on the dirt vehicle roads around Fort Bragg, North Carolina. When I moved to Maine, in 2008, I continued to run trails, but I had to embrace a much more technical and difficult style of trail running that involved jumping over stumps, rocks, roots and puddles. Even New England rock walks took some adjustment. For months, I would fall flat on my face whenever I let my mind drift. It was frustrating running on the singletrack in Maine—but I came to long deeply for it.

I started to run the same trails obsessively. I started reading the writing of kindred spirits like Anton Krupicka, Kilian Jornet, Tim Olson and Bryon Powell, who all seemed to gain transcendence through days of effort and exploration in the mountains. Jornet continually describes how the mountain makes him “feel small.” Similarly, trail running helped me put my troubles into perspective. I started to memorize every stone, root and stump. I approached the trails at different speeds, in different weather conditions and at different levels of visibility to keep me focused on the moment.

I began to better understand my longing for the trails during my volunteer work editing post-traumatic growth essays for the Military Experience and the Arts, a non-profit volunteer organization that helps veterans publish their creative work. I worked with Afghanistan veteran Michael Conn’s detailed descriptions of route clearance (RCT) and counter-improvised explosive device missions. We had shared the duty of finding bombs in combat: every day, my platoon had been tasked with clearing our battalion’s roads for safe travel.

In 2005, we did not have sophisticated vehicles; we only had lightly armored vehicles, binoculars and our memory. In order to survive, the soldiers in my platoon and I had to quickly memorize every object along the roads. The process of memorizing every inch of ground in large sections of Mosul and Tal Afar, in northern Iraq, permanently redefined my sense of place. It heightened my senses in the same way that ultra-distance athletes often describe the experience of descending mountains.

Returning to the trails every day replicated a highly learned and behaviorally conditioned desire to understand every inch of my environment. Being so focused on my surroundings, as I had been in RCT, was the only way my mind could relax. Before I took a section of trail in and memorized it, I would have high rates of anxiety and sometimes panic attacks; after I memorized them, I felt a sense of peace, awareness and presence.

I have had to turn the way war has affected me into a healthy activity. Trail running does that for me, because it helps my brain think in the same way that kept me alive in Iraq. Sometimes it is counter-productive to try and fix the way war has “broken” me, rather than simply accepting the fact that trauma will change my life. Embracing that permanent emotional longing to return to RCT and combat has helped me turn this longing into a positive activity. I just need to spend some time in my spinal column, running the trails.

How Improv Can Make You A Better Athlete