A few years ago on a volunteer trail-building project, a wise, not-so-old soul dropped that bit of knowledge on me. And the moment he said it, it made my brain buzz. It was easy to understand, knowing that water continually flows according to the pull of gravity. That’s the essence of a waterfall, one of the singular most inspiring elements of trail running.

Why do we love the waterfalls we encounter on the trails so much?

Coming across a waterfall on a trail run is like finding a hidden treasure in the woods. No matter how big or small, waterfalls provide a sensory experience that tend to make me feel good. I know I’m not alone in that feeling, given the seemingly uncontrollable reactions trail runners have when they encounter a waterfall.

No matter how big or small, waterfalls provide a sensory experience that tend to make me feel good. I know I’m not alone in that feeling, given the seemingly uncontrollable reactions trail runners have when they encounter a waterfall.

OK, a waterfall isn’t the only thing that makes us feel good on a run, but it’s almost always better to experience a waterfall on a run than not. Don’t believe me? Close your eyes and think about it. Sure, we sometimes stop to take in views on a trail—to look at the mountains on the horizon line, to view a cityscape down below, to check out a critter in the woods—but we almost always stop to admire a waterfall, especially bigger or more disruptive ones.

Last weekend, I ran a trail that paralleled a creek flowing down a mountain. The singletrack trail zigzagged for about seven miles down a valley, crossing the creek several times and offering several prime vantage points of both mellow and spectacular falls. Several times I remarked out loud to the friends about how amazed I was at the amount of water and the fervor with which it was falling. We stood there and marveled at the sight and the sounds of the falls and occasionally leaned in to feel the watery mist wafting through the air. It was as if there was a mystical aura coming from the falls that tickled and energized our souls. And, in fact, there was.

It was as if there was a mystical aura coming from the falls that tickled and energized our souls. And, in fact, there was.

For years, I’ve heard and read about the notion that negative ions are released by flowing water. They’re not inherently negative, as in bad, but instead they’re electrically charged molecules that ultimately create positive vibes that make us feel good.

Apparently those negative ions get into our system as we inhale and spur the production of serotonin, that yummy brain chemical we love to groove on while we’re running and in other enjoyable moments in our lives. So maybe that mini treasure I’m talking about is really a mini neurological buzz or a small, but natural feeling of being high.

A quick Google search of the concept suggests that negative ions also neutralize free radicals, revitalize cell metabolism, enhance immune function, purify the blood and balance the nervous system. But specifically when it comes to flowing water, there’s something known as spray electrification or the waterfall effect. That entails the separation of electric charges accompanying the aerodynamic breakup of water droplets. It’s a phenomenon known as the Lenard effect, something first studied by German physicist Philipp Lenard in 1892.

There’s no need to get deep into the science of it all, but it’s there if you want to read about it. More importantly, it’s acknowledging and embellishing the experiences out on the trails. A few weeks ago, I ran a 9.5-mile out-and-back run to Ouzel Falls into Rocky Mountain National Park and it was a mystical experience, partially because of the anticipated destination but also because of the supernatural vibe at the massive falls at the midpoint of the run.

Sure, most trail runs, and for that matter almost any run, even those on—gulp!—pavement, provide a boost in spirits, probably spurred from an increase in mood-enhancing brain chemicals. But for me, waterfalls are the special sauce that 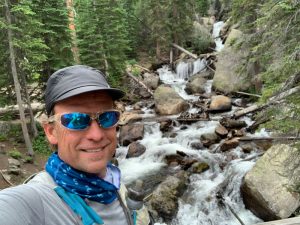 On the run last weekend, we paused several times to listen watch the bubbling water crash over the rocks. We couldn’t help but snap photos almost every time we stopped. And we noticed the other runners and hikers doing the same thing. One of us (me) even refilled hydration flasks without any concern about getting sick from the water.

As is almost always the case, the photos and videos we captured on our phones didn’t come close doing those moments justice. While looking at the images in the hours and days after the run, they seemed very two-dimensional and lacked the supernatural vibe I felt in those moments. But remembering magical moments of the run definitely still gives me a charge and makes we want to return to that trail —or similar routes—to feel that sensation again.

Brian Metzler was the founding editor of Trail Runner and now serves as a contributing editor and columnist.