A year ago right about now, I was on an airport shuttle van heading to a very special place, one of my favorite places in the world for trail running.

Let me pause and say up front that trail running is a unique, invigorating activity, no matter where you happen to be running on trails. Any and every trail has a sense of place that can be recognized and cherished. But let’s face it, some places are more special than others, probably because of the geographic features and scenic beauty, but also because of the experiences we have in those places.

There’s a certain spot along highway N205 on the way into Chamonix, France, where, if you’re smartly sitting in the front seat of that Alpy Bus van from the Geneva International Airport, you can see the enormous Mont-Blanc Massif explode into view. As the highway ascends along a deep river gorge and turns slightly to the southeast, the glaciated 15,781-foot summit of Mont Blanc appears for the first time in its glistening white glory and, if it’s a sunny day without many clouds, it’s stunningly exciting to the point of taking my breath away.

If you’ve never been to Chamonix, it should be on your bucket list. … No, I am not a Euro snob runner, but Chamonix is like no place I’ve ever been and has helped me become a better runner in all the ways. Even as I write this from 5,000 miles away, I started to buzz with excitement.

If you’ve never been to Chamonix, it should be on your bucket list. Not only as a trail runner, but just as a human being interested in visited an amazing place. The massive mountains, the winding trails, the mountain sports culture and, of course, the spectacular views, are all something to behold. No, I am not a Euro snob runner, but Chamonix is like no place I’ve ever been and has helped me become a better runner in all the ways. Even as I write this from 5,000 miles away, I started to buzz with excitement.

In normal years, the last week of August is when a lot of the trail running world converges in Chamonix for the Ultra-Trail du Mont-Blanc races. Not this year, of course, because they’ve all been canceled due to the Covid-19 pandemic. But with 75,000 runners running six races during the week, plus trail-running movie premieres, group shakeout runs and retail store events with top athletes and post-race parties, it’s a typically a thrilling cornucopia of all things trail running, almost to the point of being a sensory overload.

With 75,000 runners running six races during the week, plus trail-running movie premieres, group shakeout runs and retail store events with top athletes and post-race parties, it’s a typically a thrilling cornucopia of all things trail running, almost to the point of being a sensory overload. 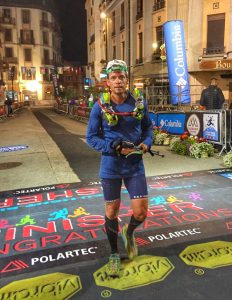 I’ve been fortunate to have been there to soak in and experience that invigorating week in eight of the past 10 years, both to write articles and take photos, but also to run the CCC 100K and the OCC 55K. There’s nothing quite like witnessing the start the UTMB race with 10,000 spectators cheering on 2,300 runners who are on a quest to run 104 daunting miles around Mt. Blanc through parts of France, Italy and Switzerland before returning to the finish line a day or two later.

Yet none of those compelling factors are why I am missing being there this week. And, honestly, I’m not even sure I can specifically explain why I am longing to be there. But it’s real and I can feel it in my bones as I recall memories, look at old photos and scour over maps. It’s more of a vibe, a sense of adventure and the feeling of being appropriately small amid enormous mountains while running trails high in the Western Alps.

Below the massive peaks and brilliant glaciers that loom above the valley, Chamonix oozes mountain culture, an authentic blend of community, a contagious resolve and a collective zeal for adventure. Embedded in that culture is a shared feeling of humility and a mutual understanding that recreating in the mountains—whether you’re trail running, mountaineering, mountain biking, skiing or hiking—is about the experience of the journey and an inherent respect for the natural environment.

Yes, there are a lot of places in the world that have some of degree of those things—Bend, Oregon, Flagstaff, Arizona, the Lake District of England, Squamish, B.C., Canada, and my beloved transplanted home of Boulder, Colorado, just to name a few—but, to me, there is no place quite like Chamonix.

That said, running in Chamonix isn’t easy. A lot of the trails are relentlessly steep and rugged. If you’re going out for a run, more than likely you’re going to be out on the trails for several hours and endure massive vertical gain and descent. That’s why most European ultrarunners have used trekking poles—believe me, they’re a necessity over there—and why so many Euro-based shoe brands (La Sportiva, Salomon, Adidas Terrex, Scarpa) consider durability and protection primary design tenets.

And it’s the little things, too. It’s conversing in the international language of trail running with other runners on the trails, even if you don’t speak French. It’s about finishing a run and stopping at a boulangerie for a baguette and cheese. It’s about sitting in the village with tired legs and looking up at the Bossons Glacier in awe and respect. It’s about meeting up with fellow runners from other countries at a pub and talking about trails, races and adventures past and future.

There are several village-to-village trail run options in the Chamonix that connect other towns in the Chamonix-Mont Blanc region, including running the entire Tour du Mont-Blanc hiking route in hut-to-hut (or hotel-to-hotel) fashion. One of my favorite adventures is hopping on a train to Vallorcine near the French-Swiss border and running back on trails over the Col des Montets, through the village of Argentière (possibly stopping for a beer) and eventually continuing on to Chamonix along the silvery, glacier-tinged waters of the Arveyron River. Running up the zig-zagging Vertical K route under the gondola of the Plan Plaz ski area is an agonizingly fun, not to mention exhausting, must-do endeavor on every trip to the valley.

The inability to travel, the cancellation of races and the disconcerting feeling of unknown 2020 has brought certainly also makes me appreciate and miss the moments I have had in Chamonix.

But OK, I’m not going to Chamonix this week and won’t be going for the foreseeable future. This year has certainly changed the way we look at things, as a result, I have certainly appreciated the seemingly unlimited number of trails I can run in Colorado more than ever before. Still, the inability to travel, the cancellation of races and the disconcerting feeling of unknown 2020 has brought certainly also makes me appreciate and miss the moments I have had in Chamonix.

I hope to get back some day, but until then I’ll relish in my memories and let tangible buzz of Chamonix reverberate in my soul.

Brian Metzler was the founding editor of Trail Runner magazine and currently serves as a contributing editor.