That pirate-like message has been delivered to a couple dozen trail runners around Roanoke, Virginia, this summer, secretly announcing a treasure-seeking adventure. No, there aren’t pirates in the beautiful Blue Ridge Mountains or within the landlocked city, but there are some trinkets buried in the foothills on the outskirts of this emerging trail-running and endurance-sports mecca.

Aside being a stone’s throw from some of the best sections of the Appalachian Trail, the Roanoke area has hundreds of miles of trails—including Mill Mountain Park adjacent to downtown Roanoke and Carvins Cove Natural Reserve 15 minutes out of town. The region first made a name for itself as a hiking destination, then mountain biking became a big thing. For the past 15 years, the trail-running scene has grown, too.

Roanoke has a great trail-running community, but it appears that one local trail runner is behind the adventure-running treasure quest, but as of yet has not revealed his or her identity. The rules of the game and all of the maps were sent anonymously, so no one has figured out who it is. (The treasure maps have been delivered by U.S. mail and/or dropped off late at night.)

Roanoke has a great trail-running community, but it appears that one local trail runner is behind the adventure-running treasure quest, but as of yet has not revealed his or her identify.

The Roanoke trail running scene has grown considerably over the past 15 years, thanks to the community-building efforts of Josh and Gina Gilbert, who organize the Mountain Junkies race series, and Blaine and Robin Lewis, who own and operate the Fleet Feet Roanoke running shop, not to mention several running clubs, including the Roanoke Valley Trail Runners.

But no one seems to know who the trail running pirate is.

Except for me, that is.

“Running trails is the only thing keeping me sane in 2020,” the pirate told me recently. “This little project of mine is a testament to how close the running community is in Roanoke. We love each other, and we know what we have here, in each other and in our community, is really something special.”

During a summer when there are no races, no pub runs and few organized group runs because of the COVID-19 pandemic, this runner has taken it upon himself/herself to keep people motivated and enjoying the trails in unique ways. It’s not an epic quest with any prize money, but it’s a unique way to explore local trails in a fun way.

Ye be receiving these treasure maps so we can adventure together, but alone on account of the COVID scurvy,” the pirate announced to runners when presenting the rules. “I’ve been lonely, ye see, and thirsting to share me bounty. If ye thinks ye have what it takes to survive Davey Jones’ Locker, then prepare fer adventures, matey. I’ve hidden treasure across the mountains, as far as the eye can see!

The lonely pirate has made it clear that proper social-distancing efforts should be made to reduce the chance of spreading the coronavirus while pursuing the hidden treasures. Each adventure is delivered in a one-page document that has a trail map, trail description (length, grade, elevation, etc.), elevation profile and a brief description of the course and where the treasure might be hidden.

To prove a trail runner found a treasure, they’re asked to post a picture on Facebook with #lonelypirate. 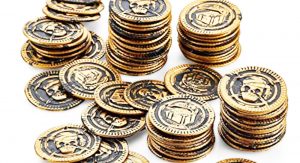 The hidden treasures are golden dubloons, small little coins slightly larger than a quarter. (OK, they’re plastic and not worth anything, but it’s the idea that counts.) They’re hidden inside a small plastic tub at each site. Eight treasures have been hidden, but so far only five have been found.

While the hidden plastic coins have no monetary value, those who have found them have posted pictures as if they’ve captured quite a bounty. The whole thing seems like a lot of fun, a unique way to add some spice to trail running during the dog days of summer. 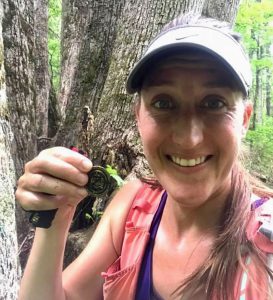 But say ye not another word, matey, or yer adventures be done! There be treasure hidden in protected woodland, so to ensure we don’t stir up any trouble, it’s important that ye don’t share yer maps or boast about yer adventures on the interwebs (though ye may circulate the maps with yer pirate friends privately). If this code be broken, the game ends for everyone.

To ensure we don’t stir up any trouble, it’s important that ye don’t share yer maps or boast about yer adventures on the interwebs (though ye may circulate the maps with yer pirate friends privately). If this code be broken, the game ends for everyone.

“At this point, I’m not too worried about letting the cat out of the bag. It might be funny to reveal it with a story in the media,” the pirate told me, admitting there is a “co-pirate” who helps deliver the treasure maps. “It’s been really funny to watch—and I’ve been playing along so I won’t be suspected.”

The pirate used elevation profiles from TrialRunProject, but didn’t list the citation on the maps because “I didn’t want to make it easy for someone to connect the maps with my Strava account as I was hiding treasure. 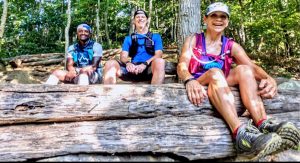 Pirates Code requires that, should ye choose to engage in this adventure, ye limit yer group of pirates to one family or less than three mates; any hornswaggle and you’ll be walkin’ the plank. Ye’ll need a compass to pillage successfully, me hearty, so be sure to bring one on each of yer adventures. If yer lucky enough to find me treasure, take only one doubloon—there be other pirates plundering as well, ye scallywags!

Here’s a sample of the directions for a treasure hidden on trails at Carvins Cove, a popular area with several intertwining trails just outside of the city.

Approaching the 3-mile mark, ye’ll hit Happy Valley again – turn to starboard (that’s take a right, ye landlubber scallywags!). Take yer first turn to port (that’s a left, ye scallywag!) on the Enchanted Forest West connector, then bear to port to continue onto Tuck-A-Way. Ye’ll be facin’ some water crossings, lads, then batten down the hatches, me hearties, ‘cause yer about to start climbin’!

Yo-ho-ho, is yer peg leg aflame yet? At the top of Tuck-A-Way (three-way intersection), bear to port (left, ye scallywag!), heading east on Kerncliff. Swab the trail until you reach the Araminta trail head, then turn your nose to the wind, ye scags, the debloons are near, aye! Walk 33 paces down Araminta and get yer bearings lads (grab yer compass, me hearties). Bear 270 degrees due West, taking 35 paces, and prepare to pillage! X-marks the spot, and ye may need to move some debris, matey!

The pirate promised to keep hiding more treasures through the end of summer and into the fall.

So who is the pirate? Who is behind this trail-running fun? I won’t reveal who it is, partially because I don’t want to spoil the fun.

But also because, as the pirate says in the rules: a dead man tells no tales.