I was running along a trail recently and … BOOM!

No, this wasn’t a run on the 4th of July—actually it was the 5th of July—and it wasn’t an audible bang with pyrotechnics, but instead a very visual and entirely silent one. As I ran through a particular part of the trail and turned my gaze into the adjacent meadow, everything in my view exploded in color.

Yes, wildflower season is in full blossom across most of the U.S., and I was savoring it in Colorado’s high country. 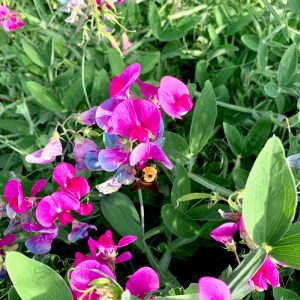 On pretty much every trail run recently, there were vibrant, reds, whites and blues, but also a lot of pink, purple, yellow and even a touch of my favorite color, orange. In the blink of an eye, I could seemingly see every color in the spectrum, a brilliant palette of eye candy in all directions.

For trail runners, wildflowers are like wellsprings of joy, color and simplicity, but the real beauty is that you  have to go into the wild to see them.

“I’m always amazed at the rainbow of colors and the intricate details of flowers that thrive in high-alpine conditions,” my trail-running partner told me as we counted dozens of varieties all around us. “They seem so fragile, but they survive in weather that can be sunny, windy, rainy and snowy in a single day and in temperatures that range from 35 degrees to 90 degrees. They’re so delicate but so hardy, too.”

We’ve all seen wildflowers on our runs, but how often do you stop to really check them out and fully appreciate them?

We’ve all seen wildflowers on our runs, but how often do you stop to really check them out? I admit that I have often taken them for granted and let them blend into the background as I run to my heart’s content. Sometimes I find that I appreciate them most late in the summer, just as they start to wilt and perish. However, lately, I’ve been obsessed and am trying to make amends. 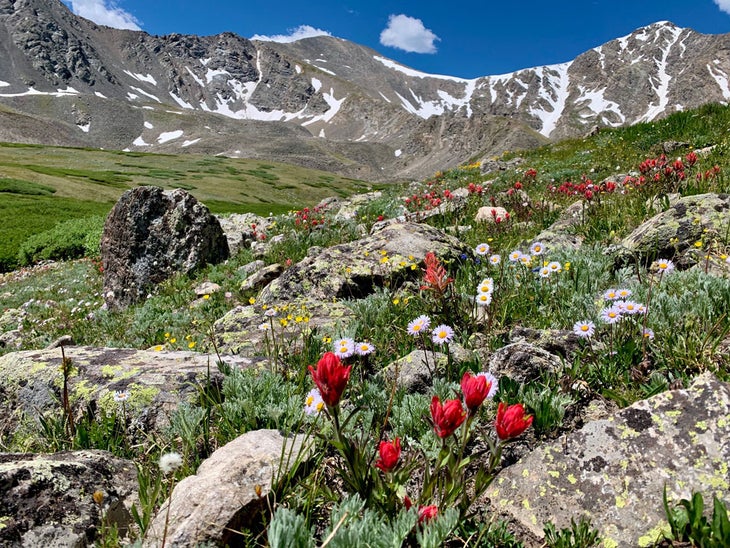 Years ago, when I first started trail running, the first wildflower that truly caught my eye—and one that still intrigues me the most—is the veritable Indian Paintbrush. There are more than 200 species of plants in the Castilleja genus, several dozen of which grow in North America. But the cool thing about them is that they appear in a wide range of colors from red to pink to orange to yellow to green to purple, but they also frequently hybridize, making it nearly impossible to identify any variety of Indian Paintbrush by color alone.

Years ago, when I first started trail running, the first wildflower that truly caught my eye—and one that still intrigues me the most—is the veritable Indian Paintbrush.

While wildflowers have been part of Native American culture for thousands of years. Some have been used to create dye and paint, many are eaten or used to season foods and others are considered to be medicinal. Legend has it that Indian Paintbrush plants originated when a Blackfoot maiden fell for a wounded prisoner she cared for and eventually helped escape. She knew she could never return to her original camp, so she used a stick to draw a map on a piece of bark with her own blood. She tossed the stick aside and went on with her life with her newfound love, but, folklore says, where the stick landed a little plant grew and became the first Indian Paintbrush. 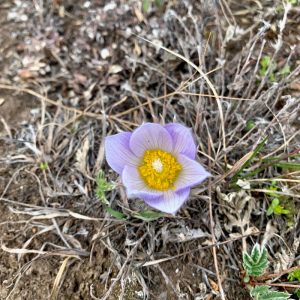 As a Colorado trail runner, I also love seeing the intricate Aquilegia caerulea, otherwise known as the Blue Columbine or the Rocky Mountain Columbine. It has one of the most elaborate geometric structures of wildflowers, with five blue or purple outer petals and five more dainty inner white pedals surrounding soft, yellow stamen. Each one is a sight to behold. In 1891, Colorado school children voted the Columbine as their favorite flower over cactus flowers, which put it on a path to becoming Colorado’s state flower.

Spotting Indian Paintbrush and Columbine have long been highlights of my summertime trail runs, but I know I have never given much attention to so many others. Lately I’ve been interested in knowing the flowers I have seen hundreds of times but could never really identify, aside from, “Wow, look at that red one!” (Because it was red.) Or “check out those blue bells!” (Because they were blue and they were in the shape of tiny bells.)

Lately I’ve been interested in knowing the flowers I have seen hundreds of times but could never really identify, aside from, “Wow, look at that red one!” (Because it was red.)

Fortunately there is an app for that. Actually, there are dozens of apps for that, including Plant Snap, Plant Identifier, Blossom and Nature ID. Snap all the pics you want and identify them in real time (if you have cell service) or load your pics of them into the app later while you’re sipping a post-run beer. (Some of the apps even have links to buy the seeds of those flowers, but, to me, planting those flowers in a garden or a pot seems contradictory to the joy of running remote trails to discover them.) 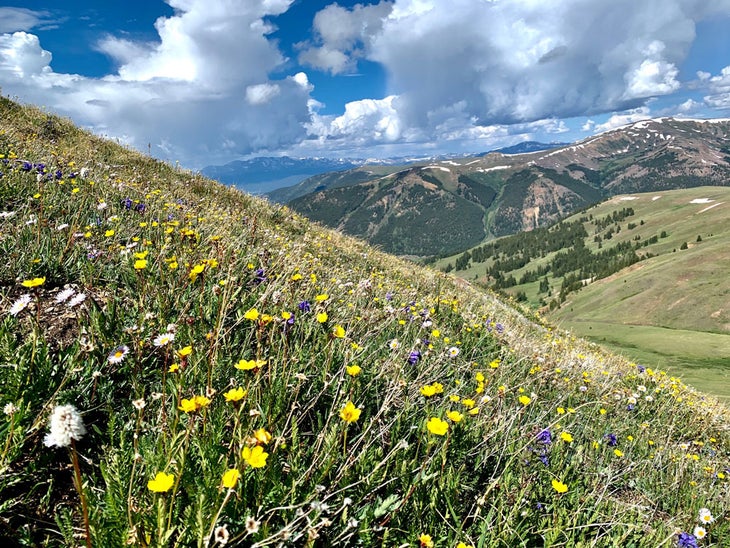 One of my new favorites is the Arctic Alpine Forget Me Not (Eritichium nanum aretioides), a tiny, five-petal blue flower that seems impossibly frail and yet tough enough to thrive in seemingly obscure places at high altitudes. Other flowers I’ve admired recently include the pink and purple Broad-Leaved Sweet-Pea (Lathyrus latifolius), the stark orange Mountain Dandelion (Agoseris aurantiaca) and the Alpine Sunflower (Hymenoxys grandiflora), also known as the Old Man of the Mountain.

Of course, then there is the Onopordum Illyricum—aka, the Illyrian Cottonthistle—which no one seems to like at all because it’s technically a noxious weed. But just before it turns into a tall, nasty plant with sharp, spiny leaves, it produces a stunning magenta puff-ball of a flower that is so soft you want to cuddle it. That which we call a wildflower by any other name would look so adorable.

As trail runners, we probably don’t need to stop and smell the flowers—though the arbonia elliptica (aka, the White Sand Verbena) is extremely fragrant and worth getting on your knees to sniff if you come across one—but it is definitely invigorating to stop and gawk at them for a while.

Brian Metzler was the founding editor of Trail Runner and now serves as a contributing editor.