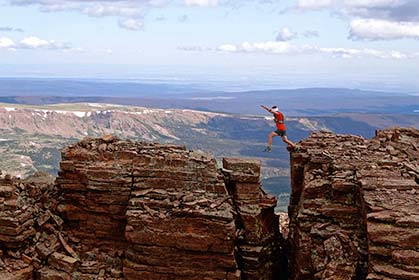 On April 5, viewers tuned in to watch a 100-mile run in Utah’s Wasatch Mountains on cable TV. Yes, you read that right.

The show, “100 Miles from Nowhere,” features Matt Galland, a part-time geography professor at Brigham Young University, and his two friends Danny Bryson and Blake Josephson. Galland uses his cartography and spatial-analysis skills to find interesting but little explored locations on Google Earth. A crew drops the runners off with a satellite phone and a locator beacon and deposits bear boxes filled with food and camping gear at three predetermined locations, 25 miles apart. Then, the trio runs back to civilization.

Galland, now 37, grew up in Provo, Utah, and has been a trail runner and outdoor-adventure enthusiast since childhood. He did his first 20-mile mountain run at the age of 10, and has scored top-five finishes at events like the 2007 Kac’ina Mosa 100K Mountain Challenge and the 2012 Squaw Peak 50 Mile Trail Run. 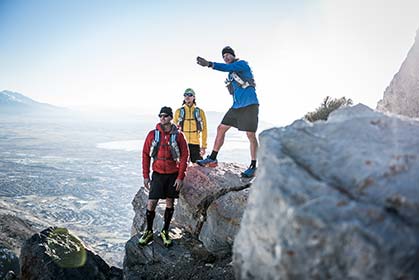 However, running fast on trails quickly lost its appeal; Galland wanted to explore the mountains and canyons that were too far for him to reach in a day. Naturally, he got his pilot’s license, so he could fly anywhere in the Western U.S. for lunchtime runs. His running buddies Bryson and Josephson often came along. Friends and co-workers started asking where Galland was going for hours at a time, so he brought along a video camera and started a YouTube channel.

One million views later, his videos caught Animal Planet’s interest. Galland agreed to do the show, on the condition that he do the filming himself. “We run on average five miles an hour,” he explains, “No crew or cameraman is going to be able to keep up.” 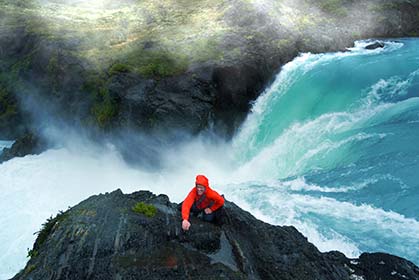 Matt Galland climbing around the edge of the Salto Grande in Torres del Paine, Chile. Courtesy of Matt Galland

The premise—run from one point to another—sounds simple, but it’s easier said than done. The runners start with no intel on their route. Over the course of filming, they have gotten trapped in Mexico’s Cañon Rio de la Venta, a canyon with no exit point for 80 kilometers. They have lost their way in a jungle in Belize at night, while surrounded by poisonous snakes.  In Chilean Patagonia, they once dead ended on a mountain pass, turning a 15-mile day into a 33-mile day. The challenges of distance, navigation and terrain are compounded by the fact that Galland is both the show’s star and its field producer. A mile might take 15 minutes, as he has to make sure to catch it all on film. Unexpected wind storms, avalanches, fragile cornices and other misadventures slow them down as well.

“The show is not about being the best or the fastest or the most badass,” he says. “It’s really just celebrating the earth. The world was created to be walked on and seen. We are just three guys who are dads—not pros— and love adventure and want to share it with everyone.”

The next episode will air on April 23 at 8 p.m. Eastern Time.