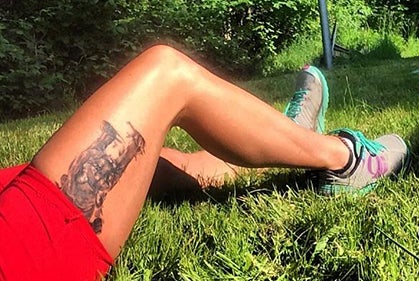 The author and her ink, inspired by her successful 2012 unsupported FKT attempt on the Wonderland Trail around Mount Rainier.

Given our propensity for adventure and sometimes even pain, it’s no surprise that many trail runners don’t balk at the idea of getting a tattoo. Many get tattoos to commemorate or relive their most meaningful experiences on the trails, and to keep themselves motivated and inspired to run.

>>> Check out a full gallery of trail runners’ tattoos here.

While setting the female Fastest Known Time on the 93-mile Wonderland Trail around Mount Rainier in 2012, I had a very close encounter with two mountain lions. I finished the route solo and unsupported in 31 hours and 11 minutes. This year, I decided to get a tattoo on my upper leg of a mountain lion, as my experience on the Wonderland was at once the most frightening moment of my life and also the most empowering.

I also got a tattoo this year of an outline of Lake Tahoe, the location of a new race I’m directing, the Tahoe 200 Mile Endurance Run—one of the first of its kind in the United States. Getting these tattoos was a way of further making Lake Tahoe and my mountain lion encounter a part of my physical being—a reminder to go after my dreams, no matter how big or scary they may be.

Here are the stories of several other trail runners and their tattoos. 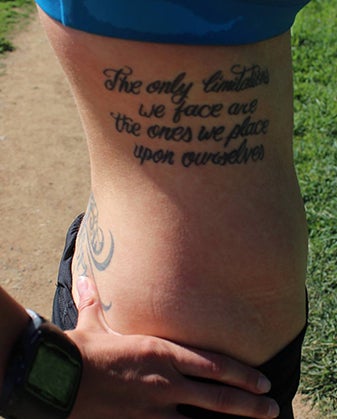 Sandi Nypaver came across this quote after a running expedition with Impossible2Possible.

In 2009, mountain runner Sandi Nypaver, now 25 and living in Boulder, Colorado, embarked on a 10-day running expedition with the nonprofit Impossible2Possible (i2P) with ultrarunners Ray Zahab, Jen Segger and Marshall Ulrich. Having struggled in the past with many hurdles including extreme shyness, depression and a belief that she didn’t have the right body type to run, Nypaver found the i2P expedition transformative.

“I had been putting limits on myself since I was a kid and the quality of my life suffered,” she says. “Suddenly I was being told my perceived limits were just in my head and I could do things like run 100 miles and that it was okay to dream big.”

Nypaver came across a quote from i2P soon after the trip: The only limitations we face are the ones we place upon ourselves. “It summed up my experience perfectly and I never wanted to forget it,” she says.

Nypaver has one other running-inspired tattoo, a mountain graphic with the phrase, Silently Strong, which she says, “reminds me to be thankful for my past, as it helped me to be the person I am today. [My tattoos] constantly remind me of the person I want to be.” 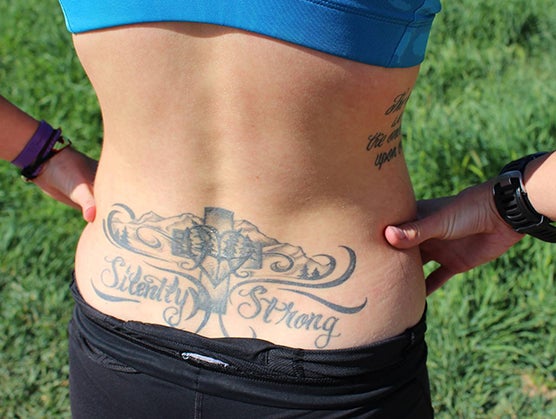 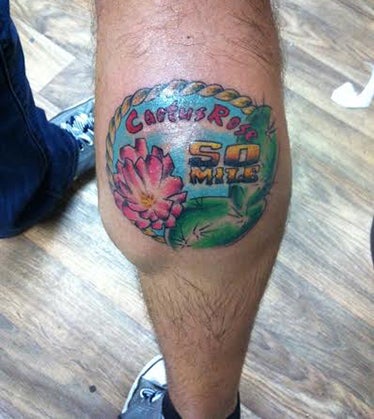 Five years ago, Rob Goyen, now 35 and living in Houston, Texas, was 350 pounds and a smoker. Running became a new way of life for him as he lost weight. When he ran his first ultra in 2012, the Cactus Rose 50-mile race, he decided to get a tattoo of his finisher’s medal.

“I wanted to feel like I could keep [the race] with me forever and remember the dedication, time and effort that it took to get there,” says Goyen. This past April, he directed his first trail race, the Brazos Bend 50 in Needville, Texas.

“I’ve always loved tattoos as an art form,” says Drummond. “It is just another way to express my love of running, even when I’m not running.” His second tattoo is a Yeti with a water bottle, representing Yeti Trail Runners in Georgia. 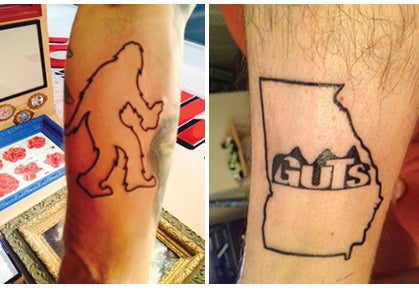 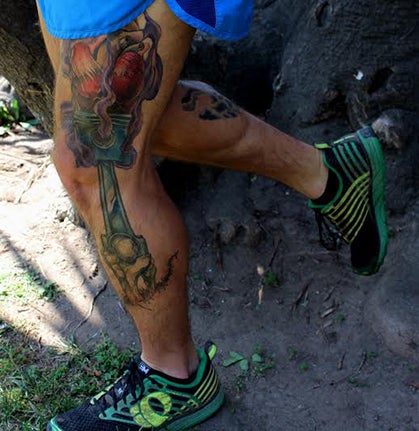 A few years ago, Justin Walker, 34, and currently living the dirtbag life on the road, was going through some major life changes: a divorce and a change of jobs. To cope, Walker turned to running, taking two months off to camp and run trails.

“Exploring places with my feet and running in the mountains on a consistent basis really opened me up as a person,” he says. “ [Running] was the only time I had in a very busy life that I could call my own. It was my meditation, my sanctuary.”

It was this love for running that inspired Walker’s tattoo—that, and his interest in mechanics. The tattoo, located on his leg, depicts a piston and flame pumped by a heart. The combination of flesh and machine expresses Walker’s interest in the body as a machine.

“If you take care of a machine,” he says, “it will keep working for a long time. That is what I think about with my tattoo—take care of this machine that is carrying me all around these beautiful places and it will take care of me.” 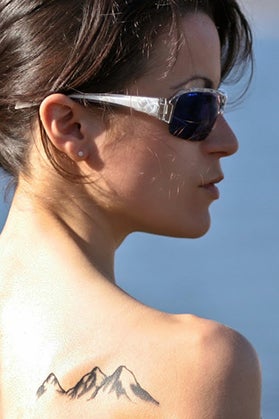 Maria Dalzot and her ink.

Maria Dalzot of Bellingham, Washington, is an accomplished runner at 26, who will represent the U.S. at the North American Mountain Running Championship in Ajijic, Mexico this summer. Despite her physical prowess, she admits, “I fear a lot of things.”

In 2012, Dalzot began training for the Deception Pass 25K in Washington state, a trail race that traverses the dizzyingly high Deception Pass Bridge between Fidalgo and Whidbey Islands. Despite her fear of heights, Dalzot trained on the course and says crossing the bridge in the race was a real win for her.

She has a tattoo of a classic, black-and-white shaded outline of three mountain peaks, which she says gives her power. “[It] is my way of being free spirited, a rebellious act. It makes me feel brave and reminds me to be strong.”

“A tattoo is permanent, much like my dedication and passion for running,” she adds. “It cannot be taken away from me. Running is who I am and always will be.”

>>> Check out our full gallery of trail runners’ tattoos here.

Candice Burt is a writer, ultrarunner and race director living in Bellingham, Washington. Candice is the race director for the first 200-mile, single-loop race in the US, the Tahoe 200 Mile Endurance Run. You can read more of her writing at Wilddefined.com. Candice runs for Ultimate Direction, Pearl Izumi and Vfuel Endurance Gel. 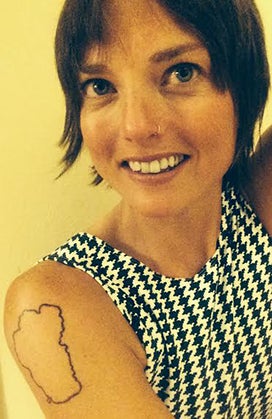 The author and her Tahoe tat.