Over 10,000 miles of running in the past seven years. A 50-kilometer run in 6:43 … at age 58*. Successfully completing both 24- and 48-hour races. Not bad stats—and they’re even more impressive when you consider they’re being ticked off by TruMan, a 9-pound, 6-ounce Dachshund, with a meager four inches of ground clearance.

TruMan lives in Bishop, California, with Catra Corbett, one of the country’s most prolific ultrarunners. Nicknamed the “Dirt Diva,” Corbett has run over 300 ultramarathons in the last 23 years, and has tallied more than 100,000 miles. She’s run the 211-mile John Muir Trail 13 times, and in 2016 took part in a team run across the country. TruMan, it seems, has won the dog trail-running lottery.

Not bad stats—and they’re even more impressive when you consider they’re being ticked off by TruMan, a 9-pound, 6-ounce Dachshund, with a meager four inches of ground clearance.

But, his life hasn’t been all smooth singletrack. Rescued from a hoarder who had 23 dachshunds, he was smallest of the pack. Low dog on the totem pole, when he first came to Corbett he was leery around men, a sign that he likely suffered some abuse, as well.

Those early days led to lingering timidity. The first day in his new home, TruMan hid behind the furniture and was afraid of the traffic outside .

“Eventually he poked his head out,” Corbett remembers. “I lured him over, then put him in my lap to let him know he was safe.”

With Corbett’s credentials, it’s no surprise that it wasn’t long before she tried TruMan out on the trails.  It was, somewhat improbably, a success. On the trail, the first thing one notices about TruMan is not his stature (or lack thereof), but the goggles he wears when running. At less than a foot off the ground, Corbett’s trail partner suffered injuries from low-level brush to which his taller two-legged running partners are blissfully oblivious. Over the dog years, he’s had a dozen such injuries. “Rex Specs” solved the problem. 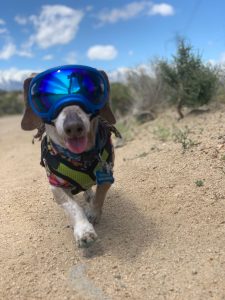 “People are like, ‘Oh, so fashionable!’ says Corbett. “But he needs them. Otherwise, dirt and sand get in his eyes,” she explains. “I’m picking out eye boogers all the time.”

TruMan loves singletrack, and in his faster days routinely ticked off eight-and-a-half-minute miles. Over 20-mile runs, he can keep a steady pace. His big challenge? Downhills, where short legs and a long body create confounding moments. But Corbett is easy going about it all.

“Sometimes, I’ll hoist him down technical sections,” she says. “Other times, he just goes at his own pace and I’ll run down and wait.”

Like the two-legged world, TruMan has his share of trail peeves. The lower-elevation trails around Bishop are often sandy and soft—and if your clearance is just four inches, the math becomes challenging.

“He’ll sink in the sand and he gets stuck in the snow.” Corbett is working on a winter solution, however. “I’m trying to invent a little sled for him so I can pull him when I go snowshoeing.”

And when the going gets too challenging, or the miles too long? TruMan can hitch.

“I can carry him if I need to,” say Corbett, whose pack is sized to accommodate her trail-running partner. Their speed slows to fastpacking pace, but it works.

Their trail time hasn’t been without unplanned excitement. Log enough miles, though, and things happen. TruMan once tumbled 40 feet down an embankment, after another dog lunged at him.

“He was lying in a ravine. I started crying, thinking he was dead.” But TruMan had dodged the rocks, landing instead in soft sand with just a scratch. “I grabbed him, ran up to the trail, put him on the ground and he was fine.”

Over more than 10,000 miles, there have been encounters, too—notably, with rattlesnakes. More than once, TruMan has found himself nearly on top of snakes before Corbett shouts, and he backs off. There have been mountain lions spotted at a distance, too—though, Corbett admits, it’s she who spots them. “He doesn’t even see them. He has terrible vision.”

Off the trail, TruMan is one athlete who indulges in recovery.

“When he’s not on the trail,” says Corbett, “he’s sleeping.” He also loves hanging in downtown Bishop at Looney Bean Café. “He loves attention and being petted. He’s very mellow. When people meet him they’re like, ‘That dog has run all of those distances?’”

Off to the races

TruMan is also a fixture on the western race scene, where he has taken part in 16 races. He’s even got his own page on the race registration website, Ultra Signup, and once ticked off the Fremont, California, 50K trail race in 6:43.

“He comes alive at the start line,” says Corbett. Since few races specifically allow dogs, Corbett consults with the race directors in advance.  “They say, ‘Oh, it’s TruMan! We’re OK with him.”

TruMan always pays the full entry fee, and during the race Corbett is careful to make sure he’s not in the way of other runners.  When it’s over, he gets his own medal, too.

At some races, though, TruMan is just part of the crew.

“When it’s my turn to race, he’s totally different,” Corbett explains. “He knows he’s not running since he doesn’t have his bib on.”It’s not an easy role for Corbett’s partner. “He wants to run. He’ll see me at aid stations and get excited, thinking he’s headed out,” says Corbett, who’s always certain she’s in a position to lend him a hand. “On a long ultra, you get loopy. I worry I wouldn’t be able to help if something happened.” At the end of the Moab, Utah, 240-mile trail race last year, TruMan did leave Corbett’s crew support to pace her for the final seven miles. Says Corbett, “He was so happy he didn’t have to crew me anymore!”

Now 13 in human years, TruMan’s tapering. Corbett takes him out on short loop run on trails behind their house, leaving early to avoid the midday heat. Though he shows no signs of fatigue, he does have a slightly enlarged heart and a murmur.

Over their many shared miles, Corbett’s concern for her four-legged partner is clear.  “When we go on a run, it’s always his run,” she says. She has a consulting vet, and TruMan gets regular physicals and x-rays to watch for spinal issues, a common weakness among Dachshunds. When TruMan summited California’s 14,252-foot White Mountain, Corbett played the concerned mom. “I was worrying about how the altitude might affect him.” TruMan ticked off the vert without the slightest issue.

While TruMan’s advancing dog years mean there are no more 2,000-mile years in his future, a few big projects still remain, including a fastpack on the Tahoe Rim Trail.  The two of them plan to take their time on the 175-mile route, tackling 10 to 15 miles a day.

“He does good in a tent,” she says, “and he loves spending the night out in wilderness.” 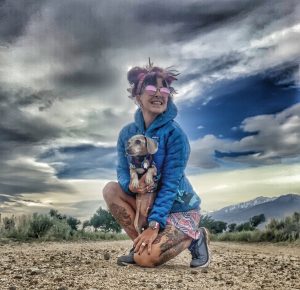 How he got his name: Unknown to Corbett—he came with it.

When he’s not trail running: Sleeping, hanging at the Looney Bean café.

Worst thing he’s ever done: Hiding in the bushes, after panicking when hearing gunshots. “I couldn’t find him, and freaked out,” says Corbett, “I was standing there crying, but he eventually came out.”

Doug Mayer has been trail running with dogs since his companion Barkley was a puppy, back in 1989. He lives in Chamonix, France.