Driving through the little town of Walnut Cove, North Carolina, seven years ago, David and Megan Roche saw a handwritten sign on a truck that said, simply, “Free Pups.” They pulled over, and in the pickup bed was a litter of puppies, seemingly unattended. One, speckled white and black, wiggled to the front, and tried to touch them. Megan fell in love instantly. Before long, the owner of the truck—and the puppies inside—appeared. “That one’s been a little weird since birth,” he said.

The Roches took that oddball. En route home, the Roche’s new pup got to experience her first trail run.  “We got a mile out,” says David, “and we had to carry her back.” Before long there was a name—Addie, short for Adventure.

At home, the new human companions experienced the “too good to be true” part of the transaction. “Addie wasn’t exactly free,” David confesses. Dogs that grow up amid the rough and tumble world of farm life don’t always receive the highest level of care, after all. The addition to the family came into her new home and immediately went to the bathroom on the floor—parasites and all. “There were all kinds of … stuff in there,” says David. Addie turned out to be a good training specimen for Megan, who would soon head to medical school.

The Roches were told that Addie was a Spaniel mixed with lab and border collie, but a DNA test hinted at a quirkier parentage: pug + golden retriever. “That explains so much,” says David. “She wants to be with us and make us happy, but post-run food gets her more excited than trail running.”

Growing up with the Roches—both are professional trail running coaches and past national champions, who have been on the U.S. Trail Running Team—amounted to winning a golden ticket for Addie. Addie has gone on to run in 27 states over the years on long road trips as the Roches relocated from North Carolina, to Washington, D.C., to California, to Colorado, and back to California. She hasn’t proven to be the fastest dog, and she is very easily distracted, but she makes up for it by always reminding David and Megan to practice mid-run fueling.

Addie sprinted down the hill, going after the bear,” says David. “I thought, ‘My first time meeting Megan and she has to watch Addie die by bear attack.’ All of a sudden, we hear a huge roar. I think, ‘That’s the end. It’s time for a final Instagram post.’

Raising a dog was new territory for the Roches. “We know nothing about dogs,” says David. “Our only policy is to put no stress in her life, ever. We never argue around her.” Roche is the first to admit that that might not be the best way to train a dog. “She doesn’t understand, ‘No’. She wants to make you happy, so she expects everyone to love her at all times.”

“But,” David confesses, “Not everyone loves dogs.”  Addie, it seems, has found a way around that reality. She’ll submissively drop to the ground, then joyously squeal at the dubious human’s feet—and she’ll smile. “Smiling is her funniest trait,” says Roche.  “People eventually realize she’s being affectionate.”

It’s dog heaven at Chez Roche, where there appear to be few if any rules. That does run the risk of a longer-term downside. “She’s probably not going to die of old age,” according to David. “It’s a miracle she’s made it this far with all of her trail misadventures.”

Last year, for example, the Roches were running outside Boulder among the Flatirons with past Trail Runner Assistant Editor Megan Janssen. (“She pretty much came to Boulder just to see Addie,” says Roche.) A half mile in, a gigantic black bear jumped into the trail, directly in front of them.

“Addie sprinted down the hill, going after the bear,” says David. “I thought, ‘My first time meeting Megan and she has to watch Addie die by bear attack.’ All of a sudden, we hear a huge roar. I think, ‘That’s the end. It’s time for a final Instagram post.’” Addie, though, was fine. “She came sprinting up the hill, tongue out, ears flopping, with an, ‘Oh My God, that animal didn’t want to be my friend.”

These days, Addie’s favorite run is a secret trail that’s a three mile out-and-back behind the Roche’s house in Boulder, Colorado. “There’s a creek she loves to run into, and her favorite neighbor dogs often drop by,” explains David. “She gets to do her run-walk intervals with stops to sniff. It’s her happy place.”  Now that the Roches know Addie’s heritage, they avoid long runs. Instead, they’ll take her on full-day hikes. “She does some kind of activity every day that involves running,” says David.

When not on the trails, Addie is busy converting others to the joys of having a dog in your life. She is, it turns out, a gateway dog. “Addie is unconditional love in creature form,” says Roche. “It’s hard to explain unless you’ve met her. I’ve never seen her angry, I’ve never seen her as anything but purely fully loving.” As of last count, 18 people have gotten a dog after spending time with Addie.

Addie has changed the Roche’s life. “Addie has taught us that love has to be unconditional, because there is no such thing as conditional love. If someone has to earn it, you don’t actually love them,” says David. “That love is a renewable resource for Addie. She gives it to everyone, and that doesn’t make it less special; it makes it more special. It makes life more real and death more real. In contemplating her mortality—something we’ve already done a few times already—I think, ‘What a life she had led!’ Not because of the adventures, but in the amount of spirit she has given to other people. Addie has been an example of exactly what we want to do with SWAP.” (Editor’s note: SWAP Adventure Team is the Roche’s coaching business.)

Dogs deserve a lot of credit for their intelligence and empathy. It’s a different intelligence from ours. They’re not out to solve a Rubik’s cube. Their type of intelligence is so much deeper and more meaningful than we are tempted to give them credit for,” says Roche. “Addie totally knows what she’s doing. Any decision she makes, we get it. We can do that, because her abiding life goal is to make people happy.

“We say, ‘You are amazing,’ not because someone earn accolades or wins races,” David explains. “We say that because someone moves forward into the unknown and goes for it. What Addie has taught us that everyone deserves that. You can lift a lot of people up with that attitude and bring a lot of light into your own life, too.” 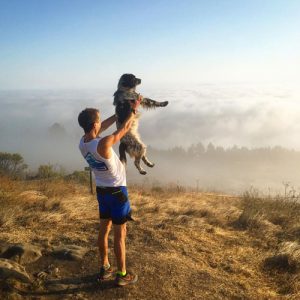 ADDIE BY THE NUMBERS

Name:Addie, short for adventure. “It embodies who she is,” says David.

Her favorite thing: Jump into every creek and sniff everything possible.

Preferred food:  Peanut Butter Puffins human cereal. “They’re delicious morsels. Addie does a ton of fetch, and the Puffins have always motivated her.”

Worst skill: Restaurant critic. She is the world’s worst restaurant critic. Everything would get 14 out of 10. You could train her with lettuce leaves. She has eaten entire bowls of salad. We are terrible dog owners. We’ll often feed her our dinners most nights.  If we have pizza, she’ll have pizza. Spring rolls, whatever. As a result, she likes sitting around the dinner table. We just try to make her one of the family fully, instead of having extra rules.

When she’s not trail running: Going to the nearest human and leaning against their leg. That … and eating. Addie has no off switch. If you had an eight-pound bag of food out, she’d eat it. Those indestructible bones? They’re gone in a minute.

Worst thing she’s ever done: At around age three or four, she understood that she doesn’t need a leash. If we have to put her on a leash to run, she’ll sit down and yank her head backwards. It’s her way of saying, “How about… not.” She needs to be off leash, or she’s not running. We understand that we aren’t the best dog owners, so we can’t expect her to be the best-behaved dog.

How To Run Slow