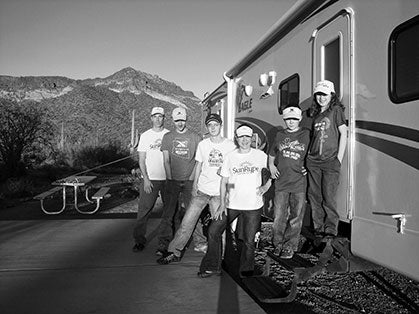 For three mornings a week last summer, Don and Mollie Quinn started their day with a 5 a.m. trail run at 9000 feet in the Colorado mountains. Later in the day they might have gone bike riding or for a long hike with their four children, ages 8 to 14. Other days they weight trained or swam at the local community center. For a fitness-conscious couple living in Colorado, that might sound normal. But Don, a 40-year-old CPA, and Mollie, a 41-year-old scientist in the pharmacy industry, don’t actually live in Colorado—or in any other state, for that matter.

Home for the Quinns is a 35-foot travel trailer they tow with a Dodge Ram truck to national, state and county parks throughout the West. They work as volunteers at the parks where they stay and frequently volunteer at trail races on the weekends, where Don, Mollie and the kids often race, too. “Mollie and I take turns racing, or one of us will do the short course and the other the long course so we can still fulfill our volunteer duties on race day,” says Don. “Our kids are seasoned pros at everything race related and love volunteering. This past winter our oldest child started racing with us and the younger two are always in the kid races.”

“I was out marking the course on foot alongside the horses hauling the water to the aid stations, when I saw this fleet-footed pair, Mollie and Don, flying down the mountain,” she says. “They’ve been showing up ever since.”

Lindner says the Quinns have all the qualities a race director could ask for in volunteers.

“They arrive early and stay until the parking lot is picked up,” says Lindner. “If they finish one thing they’re back asking what else they can do. This goes for all the kids too. And they do it all with a smile.”

Some of their favorite events are the XTERRA and Aravaipa trail  series; Ironman; the Rock ’n Roll  Marathon; Spartan  Races; along with  charity bike rides  for Habitat for  Humanity and organizations that combat MS, diabetes and domestic violence.

“We’re not dot-com billionaires, bank robbers or in the Witness Protection Program,” says Don. “Few believe the truth. Simply, we planned and saved. We didn’t blow our money on fancy gadgets, cars or a kitchen upgrade. I know, that’s un-American, but we kick it old school.”

Two and a half years ago, the Quinns sold their 1650-square-foot house in Colchester, Connecticut, along with most of everything else they owned—and hit the road. They headed west, and, when the weather got cold, turned left and landed in the Phoenix area, where they soon began volunteering at trail races.

They saved for their adventure for eight years. Mollie had an opportunity to leave her job and Don had been a stay-at-home dad, home schooling the children for several years. Mollie began doing some consulting work last summer, but they only work when they need to. The transition to home schooling on the road has been seamless, and their living to Colorado next summer, after a swing through Oregon and Idaho to explore some trails there,” says Don.

The national parks are their favorite places to land. “To be able to run and camp in the most beautiful places in our country is a great feeling,” says Don. “Some of our favorites are Glacier, Bryce Canyon, Yellowstone and Zion.”

The Quinns ran mostly roads while living in Connecticut. “We ran some trails there, but had to drive to the trailheads, which I’m not a big fan of,” says Don. “Now, we just love the peacefulness of time in nature. I’d rather jump over bear scat than potholes, breathe in jasmine than car exhaust or stop for a pee break behind a tree than in a Starbucks.

“Being around active people, sharing stories, training techniques and goals—it’s a way of life,” he says. “And raising the next generation of racers, volunteers, race directors … Where would we be without someone to carry the torch into the future?”

To view the Quinns’ blog, go to: mytripjournal.com/worldclassroom