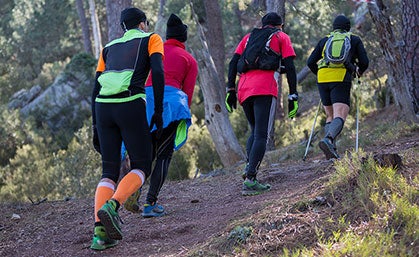 Too many runners on the trails? Photo by BigStockPhoto

Editor’s Note: The original version of this piece appeared at Sometimes I Run and is our top pick among entries into the September Trail Runner Blog Symposium: “As trail running grows in popularity, how should races adapt to prevent overcrowding on the trails?”

The popularity of trail running has exploded over the past few years, and along with the increased popularity has come a larger number of overcrowding complaints. (Ironically, some of these complaints are about races that, by virtue of their storied positions in trail-running history, have themselves contributed significantly to the larger number of trail runners who want to race.)

Overcrowding is a Real Issue

It’s important to understand that these overcrowding complaints aren’t just coming from runners who are frustrated that they’re shut out of a particular race, or who are angry that they aren’t having the same types of racing experiences that they did 10 or 20 years ago.

The bigger overcrowding issue arises because complaints are also coming from other trail users, and from local residents of the areas in which these races are held.

Sure, a number of these complaints can probably be discounted as the sourpuss sentiments of folks who don’t want to share “their” trails with anyone else. But a lot of the complaints are valid. All it takes for friendly land managers to become unfriendly are too many racers who aren’t mindful of their empty gel packs, who don’t go far enough off the trail before taking a “natural break,” or who simply aren’t willing to keep up good trail etiquette simply because they happen to be racing (remember … most trail races aren’t “closed course”).

Only when we frame the issue properly can we work towards a solution.

Remember that the issue is overcrowding during races. We can run on nearly all of the same trails alone or with a small group of friends any time that suits us. We can even put on unofficial “Fat Ass” events from time to time. But if we also want to be able to race in organized races, then we need to pay more attention to overcrowding and its external impacts. Simply put, running may be a well established trail use, but organized racing isn’t.

In fact, the continued existence of organized trail racing doesn’t depend on big money flowing in, having high-profile sponsors, or even the participation of the fastest runners. The singular thing that’s absolutely, 100% required for a trail race to happen is having the proper permits.

And we’d be wrong to assume that the race organizers are always going to be able to get those permits. Increasingly frequent rejections have been happening over the past few years in other trail sports (mountain biking, most notably), and even for some regional trail running event organizers. Think it wouldn’t happen for one of our marquee running events?

Do we really want to push it and find out?

Think About Next Year

Fortunately, I don’t think we’re powerless against the overcrowding problem. The solution isn’t a particularly complicated one, and it helps overcome other potential overcrowding issues beyond just the impact on obtaining land use permits (including the quality of the racing experience):

“When planning for this year’s race, think about next year’s race too.”

That’s it. Just think beyond today and act accordingly.

Small local race directors probably have this notion as one of their primary focuses already. The public permitting process is often a tough one, so a new race RD will certainly keep the participation numbers modest and reasonable, and seek to involve the local community in a positive way (perhaps through fundraising or other connections), in order to make it easier to get a permit again next year.

More established mid-tier races might have an easier time when it comes to permitting since they’ve been through it before and they’ve made the personal connections with land managers, but the RDs must still consider next year’s race. Remember that overcrowding isn’t just runners on the trails; there are also issues with how spectators and crews will impact the trail resources. For example, how are parking and traffic issues being handled? (It might only take a handful of complaints from other trail users that they were turned away from a trailhead for lack of parking before the permitting process becomes more difficult next year.) Would a shuttle system help keep some parking spots open for other trail users on the day of the race?

Finally, what about the top-tier race organizations that appear to value event profits above all else? Even they’d be smart to look towards future year’s races when planning this year’s event. If a race director’s primary motivation is making money, it’d be silly to milk their cash cow dry this year if it comes at the expense of significant future income. Their race might be particularly profitable this year, but if it puts an acute stress on the host town then the town might decide that it’s not worth supporting next year. Every host community has its breaking point; push things beyond that point with overcrowding and the permitting process next year might be contentious—and the cash flow suffers.

The Real Overcrowding Problem Isn’t Just What We Runners Experience

It’s easy to think of the overcrowding issue in terms of how it affects our own individual race experiences. Tales of depleted aid stations, impossible crew access, general race-day confusion and disorganization and inconsistent application of race rules and cutoff times can be extremely frustrating, and quickly have us all shouting “something’s got to change!”

But focusing on how race crowding impacts us racers ignores the bigger issue of overcrowding—namely, how it affects the other trail users and surrounding communities. If races aren’t sensitive to these issues then it’s quite possible that future race permits won’t be issued. And then we won’t have to worry about the quality of our race experience because there won’t be a race to run.