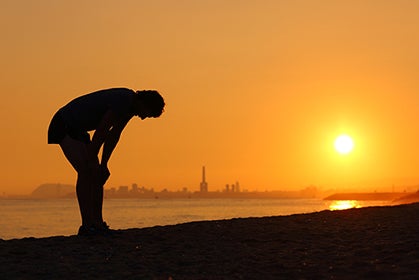 Editors’ Note: The original version of this piece, by Patty Grove, appeared at Still Running Against the Wind and was our top pick among entries into the September 2014 Trail Runner Blog Symposium: How can trail runners avoid burnout? See below for other highlights from the Symposium.

It’s no secret that many endurance athletes have addictive personalities. In many cases they substitute the seemingly healthy pursuit of exercise for alcohol, drug or food abuse issues. But, at some point, too much of this good thing overwhelms the body physically and emotionally, leading to burnout.

My story is the Hollywood cliché from central casting: the lifelong “mouse potato” who started exercising to get healthy at 39, and fell in love with the alliance between feet and the earth. Before I knew it, I’d been at it nearly five years. 54 races in 2011, then 60 two years in a row. Like many runners, I always had an off-season where I kept up my fitness with the elliptical, Zumba and outside running when possible. But there were few finish lines with hot chocolate and a banana waiting for me.

But this past winter was brutal. As the snow got deeper, it became dangerous just to step outside for the newspaper. So I turned to trail running’s challenging northland cousin, snowshoeing. I joined the Braveheart Racing series, and strapped ’em on for eleven races from January to March. While it kept me in shape and gave me an excuse to see my buddies every week, stomping around with big paddles on my feet while trying not to fall in a ravine did not come easy to me. After our last race in the Lake Superior snowbelt (serious snow country), my friend and I did nothing at the host resort for two days. As someone who’s always on the go, this was unheard of for me.

No doubt, I was fried. When I passed up a St. Patrick’s weekend run at an Irish pub a week later, I knew I was becoming a burnout victim. I had burned out of several hobbies before by overdoing them (concert-going, eBaying … ) but I really didn’t want to lose this one. I couldn’t. I had several health problems that were kept under control through exercise. Doubt had already been creeping in. I wondered if I should even keep racing, as a back-of-the-packer who places every once in a blue moon.

Since I had been so busy snowshoeing, I didn’t notice that I had missed a few deadlines for races I normally did every year. I used that extra time off for a little self-examination, and learned a few tidbits that can help anyone on the verge of burnout.

1. Don’t let the fear of falling back into your old habits drive you past your personal point of endurance.
I thought that if I missed the Birch Breakout 10K once that my fitness would be gone, I’d quit exercising and start eating the refrigerator again. I happily discovered that it didn’t happen, when my formally stagnant times started going down a little now that I wasn’t using my body for a battering ram. Which lead to the next point …

2. Give your body a rest and boost your confidence with cross-training.
In June, my local pool started aqua Zumba. It was a great break for my joints, but an even better one emotionally. Here I wasn’t the turtle that had to keep jumping off the trail to let faster runners go by, but was one of the better athletes. All that kicking under resistance made those snowshoeing legs even stronger, and along with the extra rest, I PR’d a few weeks later.

3.There’s no shame in admitting you’re not Superman or Superwoman.
It’s just another variation of the ole keeping-up-with-the-Joneses syndrome. Just because other runners can do back-to-back 50Ks every weekend, you may have a tougher work week, more family obligations, etc. Consider all these factors when looking at potential burnout. Also, don’t forget to include travel and race preparation time as well, and try to rotate between destination races and the run on your local trail.

4. Perhaps the most important key to avoiding burnout is balance.
I know people became concerned that I was too obsessed when I’d skip dinner with friends or family to sneak in a second race of the day. I decided I didn’t want to become one-dimensional either. So instead of reading shoe reviews every night, I’d read something totally off-beat on my Kindle, like beekeeping, or how to join the French Foreign Legion.

Because of the snowshoe series, my total number of races for the year will be the same, but foot races will be down slightly. I skipped a few to go to aqua Zumba, and to go to a jazz festival. Last week, I bailed out for a craft show. I must admit the best handiworks there were the medal racks with seven pegs and a bib holder. So the runner didn’t run off entirely. But hey, it’s a start.

Patty Grove enjoys working early mornings so she can train in the afternoon (when not watching Emergency! reruns) and to support her many hobbies like music and thrifting. Her main running goals for 2015 are completing the United States Snowshoeing Championships, and to do a 50K trail run in Canada, the number-one destination on her running bucket list.