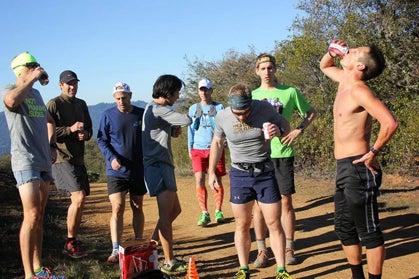 Runners at the start of John Burton’s recent Vertical Beer Mile, an uphill version of the traditional beer mile. Photo by Nina Giraudo.

In a way, the grueling four-beer, four-laps-of-the-track beer mile is the perfect fit for trail and ultra types, that particularly masochistic cadre of runners (several of whom can name a brewery among their sponsors).

Here’s how a typical beer mile works: chug a beer, run a quarter mile. Repeat four times. Try to do it without puking, lest you earn a penalty lap. Try to finish before the alcohol breaks the blood-brain barrier and running becomes a real drag. The longer you take, the harder it gets—like an ultra.

But in May 2014, Canadian James Nielsen became the first known person to run a beer mile in under five minutes (clocking 4:57.0), and his video recording of the record run went viral. Like Frank Shorter’s 1972 Olympic gold in the marathon, Nielsen’s feat thrust a once-underground endeavor into the mainstream, as well as the crosshairs of talented professional track and road runners who thought they might have just the right tools to succeed at a new event.

The all-time beer mile record list (kept at beermile.com) was quickly replete with times in the low 5s. The first Beer Mile World Championships were held to much fanfare in Austin, Texas, in December, and the event was broadcast live on the internet. (At the Worlds, Elizabeth Herndon set a new women’s record of 6:17.8.)

Naturally, the trail world looked at the event, and tried to make it harder.

“I was lamenting with my buddy Greg that the track-style beer mile favors fast little road runners and track guys, and that we should organize our own beer mile out on the trails for trail runners,” says John Burton, 41, of San Jose, California. “Then of course we started thinking, ‘what’s the toughest, steepest, most gnarly trail around here?’”

His invention would be like a regular beer mile—chug a beer, run a quarter mile, repeat four times—only it would be uphill the entire time.

And Burton is not the only innovator out there. 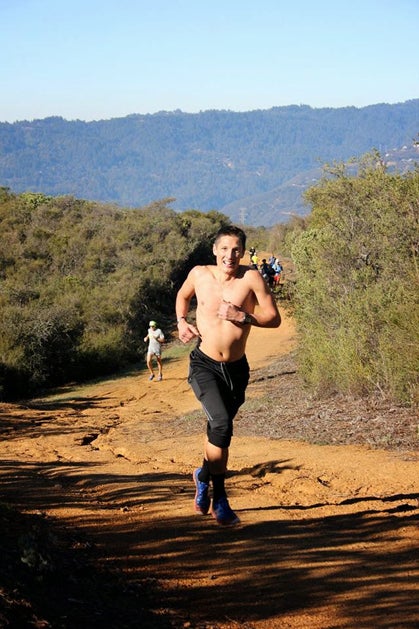 Burton takes an early lead at his VBM. Photo by Nina Giraudo.

Burton’s concoction was dubbed the Vertical Beer Mile (VBM) in homage to skyrunning’s vertical kilometer (VK) tradition. Unlike a VK, which as its name suggests covers a literal kilometer of vertical gain, Burton’s VBM would cover only a horizontal mile, with significantly less than a mile of vertical gain. But the concept of an intense uphill race was the same.

Burton concedes the VBM was not his invention. James Barstad, 50, of Cool, California, has been organizing the K2 Vertical Beer Mile for three years running, an idea he says he gleaned from pro ultrarunner Nick Clark’s account of a similar event in 2011.

Located near the No Hands Bridge aid station on the Western States 100 course outside Auburn, California, the K2 hill is a 950-foot climb, and since 2013 Barstad has held the event at night under a full moon. Local Luke Garten won the 2014 edition in 15:12—a time Barstad calls “crazy fast” for the course.

As with many ultra-distance races, some iterations of the ultra beer mile simply increase the distance (and required beer consumption) of the event.

The Silicon Valley Beer Mile Championships first featured a Beer 2-Mile—eight beers, eight laps—in 2013. It was won by none other than John Burton, who had to complete a ninth lap as a penalty for puking partway through.

And there’s more: Trail Runner cover boy Patrick Sweeney has run a beer half marathon, which on the one hand only required one beer per mile rather than four. On the other, it required he finish thirteen beers while running a half marathon.

We at Trail Runner have been around long enough to know any of these—and other concepts not yet imagined—are but one ambitious race director and a handful of total looneys away from reality.

In other words, some unspeakably crazy version of an ultra beer mile is imminent.

[Ed. note: Trail Runner in no way encourages readers to mix beer and running. But if they do, we hope they’ll invite us.]

On the early January day of Burton’s VBM, at the foot of a hill nicknamed “Dog Meat” in the Sierra Azul Open Space Preserve, the race director began as he had advised his racers not to—quickly—even though the majority of the 598 feet gained came in the last half, where the incline hovered around 20 percent.

“This course does not favor the bold,” he wrote in his race report.

Yet Burton ran boldly. He would pay for it in the race’s late stages, when then-second-place Karl Schnaitter caught him and Burton simultaneously spewed his last beer all over the hill, disqualifying him.

Schnaitter would hold on to win in 13:17, just before the park rangers showed up.

Alex Kurt is a veteran beer miler who once lost to a shoeless Patrick Sweeney and won’t stop carrying on about it. He prefers beer brewed in the same city where he lives and runs, which is Minneapolis.