Derek Cook and his daughter after a local race. Photo courtesy of Derek Cook

Trail running is like raising children. It gobbles up time. It demands attention, money, energy and passion. But it’s a rewarding investment. Or so I’ve been told. I’m 23 and kid-less, and a couple of part time jobs are the only things standing between me and spending whole days in the mountains. I am—by comparison to many people—living the high life. So how do the trail-running parents manage?

Dave Mackey, 2011 North American Ultra Runner of the Year and father of two blond sparkplugs, may have said it best in his May interview with Trail Runner. When asked how he maintains balance between running and family life, he answered, succinctly, “I owe it all to my wife. Hands down.”

Lucky are the ones who have a spouse to keep them on their feet, a second chinaware set upon which they can heap the excess from their own metaphorically overflowing plates. But how about all those single-parent trail runners out there? How do they do it? I spoke to two to find out, and one thing is clear: Dave Mackey should buy his wife some flowers.

Derek Cook, father of three (two boys, ages 13 and 7, and a girl, age 9), lives in Marion, Illinois. The 41-year-old has been running for two years, a lifestyle change sparked by his divorce.

Immediately following the split from his wife, Cook stopped eating and lost over 40 pounds. “I think a lot of people stop eating when they go through an emotional occurrence in their lives,” says Cook. But then he started to get in shape. He did pushups. He picked up a copy of Men’s Health. He entered a Spartan Race. He started to run.

Richelle Hall, a 30-year-old warehouse employee from Council Bluffs, Iowa, has two daughters, ages 7 and 9. She has been a single parent for six-and-a-half years and, like Cook, got into running as her marriage was breaking apart. “I needed to lose weight. My relationship was going south, and I needed to get out of the house,” says Hall. “[Running] is my therapy. It’s my time.”

Always an active person, Hall says running is natural for her. “When I was a kid I was pretty playful, climbing trees and riding bikes.” She made the jump from road running to trail running two-and-a-half years ago for reasons both physical and psychological. “I’m pretty anti-pavement—it hurts,” she says. “The mentality I had [while road running] was focused on times and maintaining times. All that stress lifted with trail running.”

This transition to trail running also provided a tool for parenting. “The peace that I find from nature I’m able to bring back home,” says Hall. “That makes a great home atmosphere.”

Running makes these parents great role models for their kids. “My parents didn’t do this. They didn’t run. They didn’t workout. And they had loads of health issues. I love that [my kids] are watching me,” says Cook, who wasn’t an athlete when he was younger. He was a skateboarder in high school, and is thankful his daughter has taken to running at such a young age. “I just want her to be doing it from the get go. It’s such a wonderful skill to pass on to kids,” he says.

Hall too is pleased with the impact her pursuit of running has had on her kids. “I’ve been maintaining an active lifestyle long enough that my kids see it as normal,” she says. “I’m presenting a positive example for them.”

Both Cook and Hall confess that it is difficult to balance parenting and running, especially since they are adamant that kids come first.

There’s definitely a give and take,” says Hall. “You have to be able to change plans at the last minute, either let things go mentally, or focus to make them work.” She squeezes in workouts whenever she can, doing pushups while cooking dinner or washing clothes. “A lot of it is mental when it comes down to racing [on low mileage], but I make it work.” 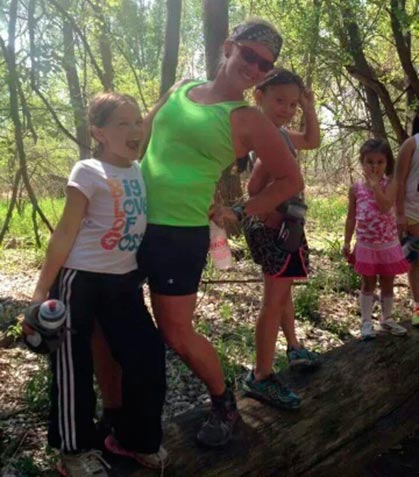 Hall and her daughters, out for some play time in the woods. Photo courtesy of Richelle Hall

Hall usually opts for multi-loop runs that pass by her house. This way she can swing by several times to check in on her kids, or they can catch her as she goes by if something’s wrong.

Hall attempted the 100-mile Lean Horse Ultra in 2008, but dropped out about three-quarters of the way through. She has run several half marathons, completed her first 100-mile race in 2013 (the Mark Twain 100), and is planning to take on the Bighorn Trail 100 and Ouray 100-Mile Endurance Run as well as more technical trails and the 150-mile distance in the future.

Cook can commiserate with Hall’s tight schedule and its ability to strangle running ambitions. “You have all these training programs and everyone’s committed, but that doesn’t work so often [for me],” says Cook. “I usually sacrifice my runs over my time with the kids.”

Like many runners, Cook has a hunger to improve. He spends each spring chasing a new 5K PR, and the parenting role compounds the difficulty of getting after some fast times. “It’s frustrating to go out after I haven’t run for seven or eight days. Then, I get back from my run and I’ve got sweat rolling down my face and I can barely breathe and all my kids attack me saying, ‘We need this,’ or ‘That happened.’ The selfish streak does hit you and you do have to recompose yourself.”

He admits his approach to training is unconventional. Though sharing custody of his children with his ex-wife gives him some time to himself, Cook finds he still needs to be purposeful with every run. “I’m constantly working at something,” he says. “I like every run to be a workout.” Unlike many people who run to free their minds of clutter and anxiety, Cook dislikes it when his mind wanders on runs. Being intent on every moment of every run helps him make the most of his exercise time.

Inundated with the needs of his kids and striving to become a better runner and dad, Cook keeps his life and family focused by being flexible. He tailors his approach to parenting based on his children’s school year and the ebb and flow of moods and behaviors. He calls upon his education as a teacher to understand what his kids are going through in different phases of their lives. “You have to be very forgiving with parenting,” says Cook.

With running, he sets goals. “Goals are extremely, extremely, extremely important,” says Cook. “I took my daughter’s old Miley Cyrus poster and flipped it around backwards and drew a 15-month calendar on the back.” He then filled the calendar in with races and training and motivational quotes to keep himself inspired.

While the average runner may not need to squeeze in plyometrics while doing household chores or hijack their child’s pop-icon posters as a reminder to get out for a run, the unconventional methods Cook and Hall have adopted to tailor their training around their parenting emphasizes their loyalty to their children.

“As a runner, you learn to push through certain pain thresholds, and that has to help you raise kids,” says Cook. So, while it may be difficult, taking up running might just be in a parent’s best interest, single or not.