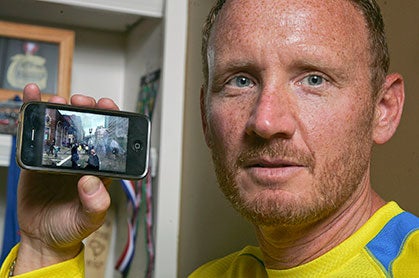 When David Green, 49, of Jacksonville, Florida, packed his bags for the Boston Marathon this year, he had no idea that his experience there would begin with euphoria, transform into horror and conclude in heroism. In the moments following the explosions, the accomplished ultrarunner snapped the clearest photo of suspected bomber Dzhokhar Tsarnaev, eventually helping the FBI positively identify the suspect—Green just didn’t know it at the time.

Green hasn’t always been an avid runner. He was first and foremost a multi-sport triathlete, completing 16 Ironman competitions before burning out. in 2009, after a bike crash in the ironman Florida left him unable to bike or swim, he decided to give ultras a try.

He was pleased to find the vibe at the starting line of the 2011 Rocky Raccoon 100-miler in Huntsville, Texas “normal again—not all body shaved.” That race, which he finished in just over 24 hours, gave him the ultra bug. The following year, he ran several more, including the 135-mile Badwater Ultramarathon through Death Valley and its lesser-known knockoff, the Brazil 135.

Green says he thrives on connecting with people—particularly athletes. Though his  job as CEO of 110%, a compression-apparel company, has had him reveling in the family reunion vibe of many a marathon expo, Green had never run Boston before this year.

On April 15, he crossed the finish line at Boston in 3 hours 28 minutes. After stopping inside a store to charge his dead iPhone, he began walking along Boylston Street when the first bomb exploded. Moments later, the second one went off, just a few storefronts away from Green. The crowd broke into panic.

Green—who’d also been present in new york on 9-11—snapped a quick picture of the chaos with his iPhone, before running toward the victims to try to offer aid. He was overcome with horror and a sense of helplessness at the scene—people maimed and bleeding, a young boy missing a leg, a man with his clothes blown off. Police soon ordered green to evacuate the area.

“I called my wife sobbing and incoherent,” he says. “Just days before, I’d been talking  to one of my coworkers, and we’d asked ourselves, as men, who could remember the last time we’d ever cried? I’d laughed and said, ‘I don’t think I’ve cried in 30 years.’”

That night, he posted his photo on Facebook with a note to let people know he was safe, albeit reeling from the atrocities he’d witnessed. Several days later, when the FBI released the first blurry photos of the unidentified, suspected bombers, a friend of Green’s sent him a text to say, “I think you gotta check your photo.”

Sure enough, when green took a closer look at his own image, the “white-hat suspect” was shown clearly, walking away from the explosion. Green called the FBI to share his photo, then reposted it on Facebook, asking friends to share it, hoping it might help someone identify the suspect.

Says green, “The running community is so strong, so vocal and focused. If you give them a cause, they rally like none other.”

The photo instantly went viral. Within 30 minutes, a reporter from The New York Times had called him. In his desire to help, Green didn’t sleep for days, doing around-the-clock interviews with major media outlets—the BBC, Good Morning America, CNN. Despite some initial skepticism online about whether the image had been doctored—Green says he has no idea how to use Photoshop—it did its job. Says Green, with 12,000 shares on Facebook, the image “at minimum provided some fresh information, and at best helped someone identify him.”

When his wife wondered aloud how green stayed up night after night doing interviews, he responded, “This is why I trained for Badwater—this is just what runners do. You look for pain and punishment, but you know there’s meaning in it.”