Hang-ups about hanging out at trail races 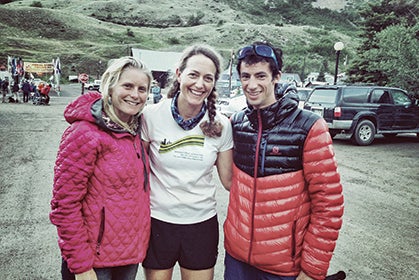 This article originally appeared in our December 2014 issue. Want more? Subscribe to Trail Runner for just $2.75 an issue.

Lying in bed at dawn on June 28, I seriously considered throwing back the covers, driving two hours north to Auburn and hanging out at the Mile 62 aid station of the Western States 100.

I felt a magnetic pull to join others and watch the race unfold. Would Karl Meltzer crack the top 10? Would Pam Smith repeat a perfect performance?

I wasn’t running it, but I wanted to be a part of the scene. I wanted to stand near my friend who’d rigged a spray gun to a bucket of water to cool down and cheer on overheated runners.

Then I pulled back from the dream pilgrimage, scolding myself, I can’t blow off the day to be a groupie! A training run, a to-do list and a date with my son all beckoned. In sacrificing those things to hang out at an aid station, I’d accomplish little more than taking photos and posting them to Facebook.

Plus, I felt awkward just showing up, like a wallflower at a dance.

Instead I headed out to run for six hours on Mount Diablo. Solo at sunrise, leaning into the hill and breaking a sweat, I felt peace and satisfaction wash over me.

But I couldn’t help pulling out my iPhone at the summit and logging onto the race-tracking website. I spent so long checking runners’ splits that my GPS turned off and I caught a chill.

I repeated a line to myself that I use on my kids: “Put your phone down and look around!” How pathetic, I thought, to be midway through a glorious run and dwell on what I was missing.

Was I simply struggling with Fear of Missing Out, that mental hang-up that strikes many trail runners and corrupts their best-laid individualized plans?

Perhaps—but something else was at play, which counterbalanced the FOMO. I’ll call it FOHO: Fear of Hanging Out.

Part of me shrinks from hanging out at trail races, because the competition makes me feel inadequate about my relatively low and slow mileage. Mainly, though, the events stoke a desire to neglect regular life. The scene and its tribe evoke the same impulse that, once upon a time, prompted me to follow the Grateful Dead and travel around the world nomadically. I want to drop everything to be more like my friend who spent four weeks running, pacing, crewing and volunteering at the Western States 100, Hardrock 100, Tahoe Rim Trail 100 and Badwater 135.

The reality, though, is that I have a life of relationships and commitments that I don’t want to blow off. I also know I need to exercise moderation to avoid injury in a sport that celebrates extremism and cult-like devotion.

Part of me wants to avoid the racing scene altogether, so I’m not sucked into its social and competitive aspects.

The other part of me hit the road two weeks after Western States and traveled to the Hardrock 100.

I arrived in Telluride, Colorado, to pace and crew for my friend Betsy Nye. In nearby Silverton, where the race both starts and, after a humongous loop, finishes, a who’s who of mountain running drew in paparazzi and big-name sponsors. The buzz leading up to the event so electrified and intimidated me that I avoided Silverton completely until I had to pace.

The day after the Hardrockers finished their odyssey, however, I found myself smack dab in the midst of the scene. The champion Kilian Jornet and phenom Anna Frost happened to be hanging out near my parked van. An awkward yet eager fan, I mustered the courage to introduce myself—and ask to have our picture taken together (above).

I also found, in the gymnasium where everyone gathered for the closing ceremony, that the last-place finisher earned as much applause as Kilian. The volunteers seemed to matter as much as the competitors. Friends and family received public thanks and warm embraces.

Caught up in the spirit and welcomed by every person I met, I felt my fears and insecurities melt into an alloy of a bright feeling that combined acceptance, inspiration and motivation. The big tent of this sport welcomes, humbles and includes all types.

If Fear of Hanging Out ever flares up again, it’s nobody’s problem but my own.