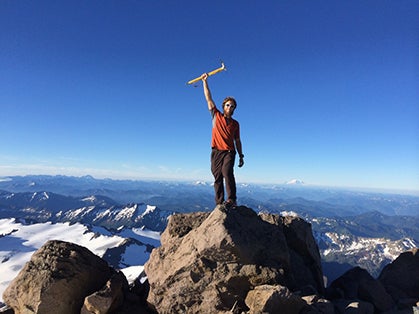 The author atop Glacier Peak in Washington.

Editors’ Note: The original version of this piece, by Richard Kresser, appeared at Running Farther and was our top pick among entries into the August 2014 Trail Runner Blog Symposium: Trail runners attempting technical mountaineering routes with minimal gear—inspiring or reckless? See below for other highlights from the Symposium.

Mountaineering was my first love. The action of traveling over such technical terrain as a heavily crevassed glacier in the middle of the night filled me with the confidence to achieve anything. Living in the Pacific Northwest, I started trail running as a means of staying fit for mountain adventures. I found the long enduring pain, discomfort and physical exhaustion involved with mountaineering transferred perfectly to the challenge of running ultras.

Rock climbing, trail running, mountaineering, rock scrambling, even parkour, to me is all the same mentality. It is about finding the most efficient means of motion over varied terrain. While a nice groomed singletrack is a joy to speed down, sometimes speed isn’t the objective.

A few weeks ago, an ultra friend and I climbed Glacier Peak in Washington in a single 14-hour push.  35 miles and 11,000 feet of gain, Glacier is usually a three-to-four day technical mountaineering adventure. Along the way, we crossed exposed cliffs, areas of high rockfall, and across snowbridges on crevassed glaciers, all in trail-running attire and microspikes. To some this might seem irresponsible and reckless. To some it might have seemed normal. It truly cannot be determined, as everyone has a different level of acceptable risk.

As trail running and rock climbing continue to blend in such endeavors as the FKT on the Grand Teton, Longs Peak and other lightly technical routes, more and more runners are becoming interested in higher peaks. The more experienced an athlete becomes, the more challenging routes they seek out.

While there will always be people out there who judge another’s actions in the mountains, Ed Viesturs put it best with his non-judgmental attitude towards climbers and risk. While he has his own level of risk, Viesturs views he cannot judge others since they have their own comfort level. For every mountaineering rule Viesturs abides by, there has been a mountaineer who has broken that rule and become a mountaineering legend in the process. Alex Honnold, the world’s foremost free solo climber, (no ropes attached) comfortably climbs thousand-foot Yosemite cliff faces with no protection, while a beginner climber might not feel comfortable top roping an easy 5.7 rock wall.  Who is to say either is incorrect?

We chose to climb on Glacier after evaluating snowbridge conditions (solid snow and ten feet thick), rockfall hazard (climbed overnight when rocks are still frozen together, not midday when they are melting off), and based on our prior experience (many cumulative years of glacial mountaineering in the Pacific Northwest and Alaska). To us, the risk was within our comfort zone, albeit on the far end of it.

The endurance-run climb is the direction trail running is beginning to gravitate toward. As more and more runners join our ranks, the more experienced within our sport will look toward more challenging technical terrain. There are bound to be accidents and subsequent armchair critiquers, and the cycle of the Internet haters will be complete.

But, to those who want that thrill of adrenaline, high on a mountain, with only your hands and feet holding you on and nothing else, I say godspeed!

Richard Kresser is a dirtbag climber and trail runner.  Formerly a US Army Engineer Captain from Tacoma, Washington, Richard now lives out of his van. He is also the holder of the Unsupported FKT on the Wonderland Trail. Richard is looking for a job, so if you know of a fun one, let him know!