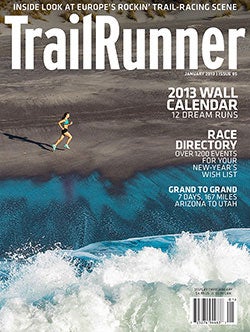 Just when your trail motivation has withered under fall’s gloomy weather and your waistline blossomed from too much stuffing, Trail Runner’s Annual Race Issue comes to the rescue. With our 2013 Race Directory—which features over 1200 events!—and Annual Wall Calendar—showcasing 12 stunning trail images—we hope to keep you from becoming one with your couch.

In Associate Editor Ashley Arnold’s “The French Taper,” you can vicariously experience what it’s like to crew Europe’s Ultra-Trail du Mont-Blanc, and then to run amid a super-stacked international field in the fantastic and rugged Jungfrau Marathon, which served as this year’s World Long Distance Mountain Running Challenge. And in Run Amok, columnist Rickey Gates tracks down Lance for a mountain run near Aspen, Colorado, while in Last Gasp, Bernie Boettcher runs TransRockies, but then gets knocked off the trails from a motorcycle crash.